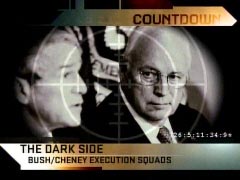 On MSNBC on Monday, 1600 Pennsylvania Avenue anchor David Shuster decried a lack of "standards" on Fox News: "The inflammatory rhetoric from the wing nuts, is it merely entertaining or seriously dangerous?....Shouldn't there be some standards at some of these other networks? I mean, that's a problem, isn't it? There's no standards."

But David Shuster really should have looked in the mirror first at the March 12 edition of Countdown, where Keith Olbermann spread the cock-eyed conspiracy theory that there was a Dick Cheney-led "executive assassination ring" in the White House, according to radical-left journalist Seymour Hersh. Sadly, Newsweek’s Howard Fineman only helped Olbermann sell this underbaked, unsubstantiated right-wing death-squad story.

Regardless of which party is targeted, an inflammatory conspiracy theory against a politician should require a higher standard than "I can’t debunk it." (This is essentially the "you can’t disprove it" standard Mary Mapes and Dan Rather used at CBS.)

Olbermann was working from a blog at MinnPost.com by former Minneapolis Star-Tribune reporter Eric Black on an event at the University of Minnesota that featured Hersh and former vice president Walter Mondale. Carter’s veep also laid into Cheney: Mondale said that the precedents of abuse of vice presidential power by Cheney would remain "like a loaded pistol that you leave on the dining room table."

At the top of the show, Olbermann crowed:  "Assassination tango: The Bush/Cheney execution squads – Sy Hersh’s stunning scoop." The format of Countdown is odd enough that the unproven claim of a vice president running secret death squads is the number five story of the day. Olbermann began:

In 1976, President Gerald R. Ford issued an executive order that read in part, quote, "No employee of the United States government shall engage in or conspire to engage in political assassination." 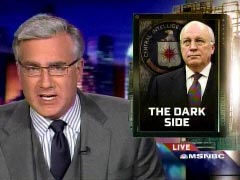 Our fifth story on the Countdown tonight: As we reported on this newshour last night, investigative reporter Seymour Hersh, claiming to have uncovered a covert executive assassination ring that reported directly to Vice President Dick Cheney’s office. A reminder -- if one is needed – that in 1976, Mr. Cheney was the chief of staff to President Ford. Meaning, by the time Cheney was back in the West Wing, it appears he had either forgotten about his own boss’ executive order or worse, he had decided to ignore it.

Mr. Hersh is making the revelations at a forum in Minnesota two nights ago. The topic: America’s constitutional crisis. Hersh saying of Mr. Cheney and his inner circle, quote, "They ran a government within the government." Adding, "Eight or nine neoconservatives took over our country."

Hersh’s bombshell allegations about the assassination ring, the result of reporting for a book he says might be still a year or two away from being published. Hersh is telling MinnPost.com in an email after the event, that the disclosures are, quote, "not something he wanted to dwell about in public."

The toothpaste, however, is already out of the proverbial tube here. When the discussion touched upon the abuses of executive power, Mr. Hersh asked how these things tend to happen and whether they continue to happen to this day. In his reply, the reporter describing a secret commando unit officially called the "Joint Special Operations Command."

HERSH (audio clip): It’s a special wing of our special operations community that is set up independently. They do not report to anybody except in the Clinton, I mean, in the Bush/Cheney days, they reported directly to the Cheney office. They do not report to the chairman of the Joint Chiefs of Staff or to Mr. Gates, the secretary of defense. They report directly to him.

They are not -- they have absolutely no -- Congress has no oversight of it. It’s an executive assassination wing essentially, and it’s been going on and on and on.

And just today in The Times, there was a story saying that its leader, a three-star admiral named McRaven ordered a stop to certain activities because there were so many collateral deaths. It’s been going into, in -- under President Bush’s authority. They’ve been going into countries, not talking to the ambassador or the CIA station chief, and finding people on a list and executing them and leaving. That’s been going on, well, in the name of all of us.

OLBERMANN: A CIA spokesman today responding to Hersh’s allegations by calling him, quote, "utter nonsense." Two angles on this, at minimum -- John Dean in a moment. First, we’ll call in our own Howard Fineman, senior Washington correspondent for Newsweek magazine, whose book The Thirteen American Arguments has just been released in paperback. Howard, good evening.

OLBERMANN: If Sy Hersh alleges here, the vice president, the former vice president and a covert assassination ring operated without talking to the CIA, how exactly would the CIA be in the position to call Mr. Hersh’s reporting "utter nonsense"?

FINEMAN: Well, moreover, Keith, if there a – if there in fact is such a thing as Seymour Hersh’s reporting seems to indicate and the CIA was kept in the dark about it, the last thing they would want to do right now is admit it. So, either way, they don’t have an interest in confirming no matter what they know at this point.

In checking around in the intelligence community today, I can say this, you know, Seymour Hersh is somebody they respect. They don’t always trust. But they put it this way, as one of them said to me, look, I don’t know anything about this specifically at all, but I wouldn’t dismiss what Sy Hersh is saying without checking carefully. That’s their backhanded way of saying it’s worth looking into, for sure.

OLBERMANN: Presumably, the second half of his allegations, which was that the CIA was involved significantly in domestic operations in the last eight years, that would be something somebody in the CIA probably could deny with some degree of credibility. But as to the other thing.

OLBERMANN: . just because we might not be surprised by what Mr. Hersh is alleging, I mean, people who look at Dick Cheney would say, well, yes, that sounds plausible if it isn’t actually true -- should that make this revelation any less shocking or if true any less egregious and essentially terrifying to the nature of the democracy? 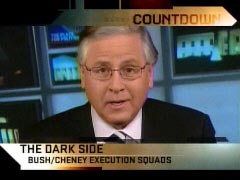 FINEMAN: Well, depressing is another word I would use, and infuriating. If it pans out, if when Sy’s book comes out, it’s all there – because it would be of a piece with the picture that’s emerging. "We became what we beheld," to use a phrase from a great movie called The Untouchables. And I think it’s clear in the days right after 9/11 that, especially Vice President Cheney and he managed to convince George W. Bush, and maybe he didn’t need a whole lot of convincing, that secrecy and really, lawlessness was the way to go in the early days.

And rather than focus on catching Osama bin Laden, to use another phrase, they didn’t let a good crisis go to waste. And they used the atmosphere of crisis after 9/11 for all kinds of aggregation of power – accumulating power in the executive and really within the vice president’s office in a way that we haven’t seen outside of declared wartime and even there, with more strictures than were the case here.

OLBERMANN: Could this report, or report of a report -- since he doesn’t have anything on this yet other than his allegation -- could it possibly put some muscle, some steam behind the truth commission that Senator Leahy is calling for, but a truth commission that would allow for the necessity of prosecutions? Because if this is true, you have to prosecute this, there’s no way around this.

FINEMAN: Yes. This would be even beyond the -- be beyond the powers, I think, of the commission of inquiry that Senator Patrick Leahy is talking about. I talked with one of his aides a little earlier, their point of view is, basically, look, not that many people have signed on to Senator Leahy’s call for a commission of inquiry, but one other shoe-dropping, one other big proven, you know, strong allegation and members of the Senate are going come running to Leahy to sign on. This could be that thing depending on how much it pans out.

I checked with Senator Russ Feingold’s office, he would be one of the people out there pounding on his desk on the Senate floor. He hasn’t done it yet. I think people want to look and see what Sy Hersh has around this topic. But one more really strong series of allegations like those OLS, you know, those Justice Department memos that came out the other week, another one like that, I think, you are going to see a lot of senators wanting to join Senator Leahy’s side on this.

This kind of allegation isn't entirely new to Fineman: He tenderly worked to associate Republicans with Oklahoma City bomber Timothy McVeigh on May 8, 1995: "the Oklahoma bombing has illuminated a once dark landscape much farther afield: a radical fringe of militant gun owners, 'hate radio' talk-show hosts, racial extremists, and religious cultists. Their numbers are small -- and their GOP ties tenuous at best. But their fervor is influential at the grass roots Republicans call their own."