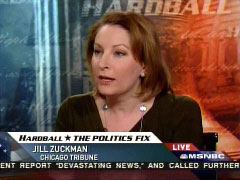 From the Revolving Door file: more liberal newspaper reporters are leaving their D.C. bureaus behind for jobs in Democratic politics. Scott Shepard of Cox Newspapers is joining the office of Sen. John Kerry as a speechwriter, while Chicago Tribune reporter Jill Zuckman is joining the Obama administration as a public-affairs officer for Transportation Secretary Ray LaHood.

Michael Calderone, media reporter for the Politico newspaper, reported that both Shepard and Zuckman blamed financial troubles at their media companies as a factor in their decision to become federal employees.

A look at the MRC "Notable Quotables" archives show some clues that these reporters may have comfortably signed up for the Democrats. Shepard drew attention in 1994 for going beyond the facts to defend Clinton’s Surgeon General Joycelyn Elders:

"[Rep. Vic] Fazio and [Surgeon General Joycelyn] Elders have, in fact, been very critical of [Ralph] Reed's organization in recent months, but not of Catholics, a traditional and pivotal constituency of the Democratic Party."
-- Cox News Service reporter Scott Shepard on the Christian Coalition conference, September 16, 1994.

Reality Check:
"The comment came during a clip in a televised interview with Elders that appeared July 13. In that news clip, she is shown saying 'Look who's fighting the pro-choice movement, a celibate, male-dominated church.'"
-- Religious News Service dispatch published in The Phoenix Gazette, September 4, 1994.

There were also a few entries featuring Zuckman:

"The loss of influence couldn't come at a worse time, since many [Congressional Black] Caucus members represent poor urban or rural districts that will be hit most harshly by shrinking government services and cutbacks in social welfare programs." -- Boston Globe Washington bureau reporter Jill Zuckman in a news story on December 27, 1996.

JILL ZUCKMAN, Chicago Tribune: I think this is one of the reasons why what Greenspan says has so much resonance because this is the Texas oil crowd in the White House and so --

ZUCKMAN: – people assume that a lot of what they do is motivated.

MATTHEWS: Okay let me ask you this. Exxon, Mobil, making tens of billions of dollars in profits this year. So the war worked out well for them right?

ZUCKMAN: Yes, and we can pay crazy amounts of money at the pump.

MATTHEWS: Should we put Exxon signs up over Arlington Cemetery and Mobil signs up there, like they have at baseball stadiums? – September 17, 2007 Hardball.

Well, look, Senator McCain's got this great story about what he survived and what he endured and his campaign wants to tell that story as much as possible because they think that that's something voters respect and it gives them a sense of what he’s made of. But Senator Obama’s got a great American success story, too, and it’s just a different one and I think voters are equally impressed with what he’s all about.

The most famous of which, at least in my mind, being the move of CNN's Sanjay Gupta to surgeon general. But there's also Jay Carney who left his post at Time magazine to become vice president Joe Biden's communications manager. And then there's Aneesh Raman who quit his job as an international correspondent for CNN to join Obama's campaign. And who could forget Dateline NBC alumna Jane Pauley who stumped for Obama before a crowd of 8 people.

But, of course, despite the alarming frequency with which cheering reporters have rushed the gates of the Obama administration looking for work the revolving door his been spinning off its hinges for quite some time now. The migration in and out of liberal politics has been so frequent for so many reporters that NewsBusters has dozens of stories on the subject.

So, given the history, perhaps Zuckman's reaction to be hired by the very people she was charged with objectively scrutinizing should come as no surprise:

"I'm so excited about this. I think this is going to be really fun," Zuckman said by phone Sunday.

And after all there always seems to be an air of excitement when the press talks to, looks at, or thinks about President Obama...