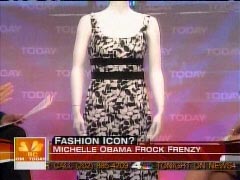 The softening of Michelle Obama’s image continued Friday morning on NBC’s Today. As if Michelle were an up-and-coming Jackie Kennedy, NBC devoted a story in its first half-hour (usually devoted to substantive news) to raving over Mrs. Obama as a "fashion icon" and the sleeveless dress she wore on ABC’s The View as starting a "frock frenzy." At the top of the show, co-host Matt Lauer announced: "Fashion frenzy. Why women everywhere are dying to get this $148 dress, today, Friday, June 20, 2008."

Nineteen minutes into the first half-hour, the screen graphic was "Fashion Icon? Michelle Obama Frock Frenzy." Co-host Meredith Vieira raved the Michelle dress was a "steal" and that fashion designers "would die to dress her right now." With the celebrated dress hung like a Smithsonian Institution museum piece in the background (reserving Mrs. Obama’s place in the First Lady pantheon already?), Vieira did the gooey girl-talk job Kathie Lee Gifford was hired to do in the 10 am hour:

MEREDITH VIEIRA: Now to that dress that everyone is talking about. The one that Michelle Obama sported on "The View" this week. It is now flying off store shelves. At just $148 a pop, it is a steal. Donna Ricco designed the dress. Donna, good morning to you.

VIEIRA: And I know when you designed this, you never anticipated anything like this. How surprised are you by all the publicity about this dress?

RICCO: Well, it, it, I'm very happy. I'm very surprised. I had no idea she would be wearing this dress. But it's sort of a natural happening for me because I've been designing dresses a long time. We ship a lot of dresses to the stores and I'm happy that Michelle chose this dress to wear on "The View."

VIEIRA: Right, as you said, you didn't design it for her. She bought this off the rack.

VIEIRA: There are so many designers who would die to dress her right now, so just the fact that it's your dress must be incredibly rewarding to you?

VIEIRA: Well, you know a lot about fashion. She is trying to reintroduce herself to the public. How important is what she wears in an effort to get the people to know who she is?

RICCO: Well, I think that a dress is great choice for her to wear. First of all no one else is wearing dresses in the campaign. I think it gives her kind of an edge. You know, women really want to feel feminine, and they want to feel pretty. Wearing a dress, especially this one I think is a very powerful image and can really help her stand out from the crowd.

"No one else" is wearing dresses on the campaign trail? Cindy McCain doesn’t ever wear a dress?