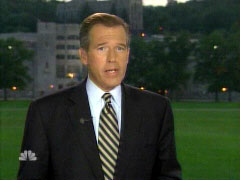 NBC Nightly News and ABC’s World News both brought out their Republicans-might-be-racists handbook and took advantage of PBS’s and Tavis Smiley’s decision to hold a Republican debate on black issues on the last week of the third-quarter fundraising crunch. Instead of trying to negotiate a better time, Smiley and PBS painted Republicans as making a huge and possibly racist mistake. Both networks loaded up on soundbites trashing the GOP frontunners for snubbing minorities and creating an "image problem" for themselves and their party.

BRIAN WILLIAMS: The Democrats debated on MSNBC last night. There's yet another presidential candidate forum going on tonight. The Republicans running for their party's nomination, they were all invited to talk about issues important to the black community in this country. But as NBC's Kevin Corke tells us, what's really notable about tonight's event is who didn't show up.

KEVIN CORKE: Rudy Giuliani and Mitt Romney are in California. John McCain is campaigning in New York. And Fred Thompson is in Tennessee. But none of the Republican front-runners will be in Baltimore for tonight's presidential forum at an historical black college -- Morgan State.

JOHN MCCAIN: We talked with them months ago that we had an event scheduled.

RUDOLPH GIULIANI: No matter how demanding somebody might be about their particular thing, you got to, you've just got to say, well, gee, you know, this next week is devoted to fund-raising because we've got to put a report in.

TAVIS SMILEY, PBS: They've told every black request, essentially every brown request, there's a scheduling issue here. Is it really scheduling or is it a pattern? 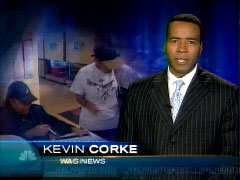 CORKE: It's not the first time minority voters have felt snubbed by the GOP. Just last month, a debate sponsored by Univision, the Spanish language network, had to be postponed after only one candidate, Senator John McCain, agreed to appear. And in July, Colorado Congressman Tom Tancredo was the only Republican candidate to attend an NAACP forum in Detroit. Former GOP vice presidential candidate Jack Kemp chastised the candidates for missing tonight's forum.

JACK KEMP: I think we will be punished at the polls for turning, seemingly turning our back on such a large proportion of the American people.

CORKE: In a close election, the African-American vote can be pivotal. In 2004, Bush won 16 percent of the black vote in Ohio -- five points above the national average. Without Ohio, he would have lost the election. Some analysts say the no-show candidates are undermining the party.

MICHAEL FAUNTROY, Author of Republicans and the Black Vote: I think it's the sort of thing that they may be able to benefit from during the primaries, but when the general election rolls around, they're all going to pay a price for this.

CORKE: An image problem for a party coming off a decisive loss in 2006 and already on the defensive heading into 2008. Kevin Corke, NBC News, Washington.

The point of view that’s completely left out of these stories is that facing harsh questions from liberal black journalists on PBS or liberal Hispanic journalists on Univision might be a much greater risk than not showing up. When the national media could turn a nonsense word like "Macaca" into a national news story on Republican racism, the risk should be clear. Ultimately, in Sen. George Allen’s 2006 campaign, it didn’t matter that he had worked hard at minority outreach. The media not only declined to credit him for it, they created an entirely different image for him.

NBC’s Today ran with another version of Corke’s story on Friday morning, adding the harsh words of Mike Huckabee and Sam Brownback from the debate calling the no-shows a disgrace. On ABC’s World News with Charles Gibson on Friday night, Ron Claiborne’s report offered more of the same. Again, MRC’s Brad Wilmouth offered the transcript:

ELIZABETH VARGAS: To presidential politics next. The four leading Republican candidates find themselves on the defensive tonight. And some of the critics they're answering are within their own party. The four skipped a nationally televised debate on issues of special interest to minority voters. That opened the door to attacks from candidates who did take part. Here's ABC's Ron Claiborne.

RON CLAIBORNE: It began with a gentle jibe.

CLAIBORNE: But when the candidates who were there were asked about their missing rivals, some of the comments were anything but gentle.

Senator SAM BROWNBACK (R-KS): I think this is a disgrace that they're not here.

CLAIBORNE: To dramatize their absence, the debate sponsor PBS left four empty podiums on the stage. Giuliani, McCain and Romney had said they could not attend because of prior commitments. Fred Thompson accepted, then backed out when the other three declined.

TAVIS SMILEY, PBS: I mean, what are your priorities? Another fund-raiser with the same people? You can't make 90 minutes in the entire primary campaign to talk to voters of color? I mean, I don't think we're being unreasonable here.

CLAIBORNE: Earlier this year, the Spanish-language network, Univision tried to sponsor a Republican debate, but only John McCain agreed to show up. Univision cancelled the event. Even before last night's debate, the Republican contenders had come under extraordinary criticism from inside their own party.

SCOTT RITTER, Republican strategist: Let's face it. The politics of not attending on this is lousy for Republicans, and sends a very bad signal.

CLAIBORNE: On the stump today, the candidates defended their decision.

CLAIBORNE: Another possible reality, if African-American and Latino voters perceive the

Republicans as snubbing them, it could undermine Karl Rove's goal of peeling away what has long been the Democrats' most loyal base. Ron Claiborne, ABC News, Baltimore.

Neither network noted that CNN rescheduled its YouTube debate after the front-runners said they could not attend on their September date, but PBS, it seems, would rather have "the issue" of a Republican minority snub than an actual debate with front-runners.