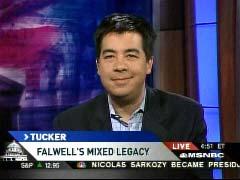 As Mark Finkelstein noted, (following the well-worn formula of "trash Bush, get a book deal, and be excerpted lovingly by Time magazine and interviewed on 60 Minutes") former Bush faith-initiative aide David Kuo is again milking the conservative-trashing formula after Jerry Falwell's death. On National Public Radio's evening newscast All Things Considered on Wednesday night, Kuo continued his attack line that Falwell harmed the cause of Jesus and social conservatism:

Yesterday, a friend from Los Angeles called. The person is successful, known, part of the entertainment industry. Jerry Falwell is, my friend said, the reason I can't call myself a Christian in Hollywood. He is what everyone thinks to that when they hear the word Christian. That may well be Jerry Falwell's most enduring and most troubling legacy. Jerry Falwell almost single-handedly blurred the line between Jesus and conservative politics to the detriment of both.

Though he was a largely marginalized political figure in the later years of his life, Falwell took great pride in the political giant he helped create. He knew that without Jerry Falwell, the religious right wouldn't be what it is today, and he liked that. It is the single most powerful force in American politics - a force unrivaled in raw political power since the unions at their height in post-World War II America.

But the man who once said that pastors should just preach Jesus from the pulpit and not bring the pulpit into politics also had to see that he had failed. The America Jerry Falwell said goodbye to yesterday is an America more politically divided and culturally coarse - more violent and less loving - than the one he tried to start saving through political action in the 1970s.

In the 30 years since he brought politics to his pulpit and his pulpit to politics, conservative commentator Bill Bennett documents that divorces are up, out-of-wedlock births are up, family formation is down, crime is up, drug use is up, teen sexual activity is up and church attendance is down. Falwell's great bet - that political power could create a more Christian America than the humble preaching of Christ could -- failed.

Then there is the matter of faith itself. Whether deserved or undeserved, whether it is stereotype or reality, Jerry Falwell became the face of American Christianity. His strident stance on abortion made people think that to be Christian meant having to adopt exactly his standards on abortion. There was no nuance. There was little public grace on such matters. His truly horrifying statements about AIDS being God's condemnation on homosexuals may have single- handedly turned more people away from Jesus than could fill all of today's mega-churches.

And then there were his statements about 9/11. His bizarre words blaming people who had abortions - people who were gay, people who didn't adopt his politics - were spiritually destructive beyond words. The nature of the Christian faith however is hope - hope in the unseen, hope in the goodness of God, hope in resurrection.

Let's hope the defenders of the liberal elite at NPR don't try the sorry defense that putting Kuo on is actually having a conservative commentator on the taxpayer-funded airwaves. On his blog, Kuo also has a post about he and his bride were horrified at the prospect of being married by Jerry Falwell (who had graciously volunteered) because it would horrify his liberal and non-Christian friends:

What horrified us, however, was the impression it would send to those watching our ceremony. Many of those in attendance weren’t Christians. Kim and I had, however, spent a lot of time talking to them all about Jesus – talking to them about the Jesus of the Gospels and how different he was from the Jesus of the GOP. To have Jerry Falwell preside at our wedding would have destroyed that spiritual work we had done. Jerry Falwell’s Christianity was a Christianity that melded political conservatism with the Gospel. In Falwell’s world, it was virtually impossible to be a Christian and not be tithing to the GOP.

That is the spiritual wake that he leaves behind, and it is a wake that will leave the waters muddy and swirling for years to come. What theologically conservative Christians must now fight against isn’t merely the problems people have with faith in Jesus, but the problems they have with the political agenda so synonymous with Jerry Falwell.
Fortunately, there are at least five ways to reclaim Jesus from conservative politics.

He also wrote a sneering blog post on how he was excited to redefine Christianity as "something more than simply saying no to abortion, no to gay rights, no to alcohol, no to coed dorms, and yes to politics." That's funny. That's exactly how the liberal media defines conservative Christianity -- with almost no mention of Christ or his church. When Kuo rolls his eyes at "strident" rhetoric about abortion, someone should ask him precisely how much wiggle room we should add as we redefine Christianity -- is abortion not a sin now? Is homosexuality not a sin now? Isn't the rejection of sexual sin an important part of the faith? Or is this just the right words to use to unlock the door to more NPR commentaries and CNN interviews?

How dare this man pompously imply that everyone else is being political with Jesus as he plays politics to advance his own career and pocketbook and political influence.