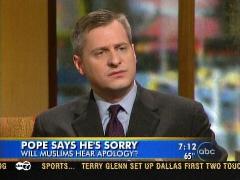 When Newsweek likes a book, it can give it good play. Take former Republican Sen. John Danforth's brand-new book attacking the religious right, titled "Faith and Politics: How the 'Moral Values' Debate Divides America and How to Move Forward Together."  Newsweek plugged it in the magazine's print edition (with the headline "'St. Jack' Examines His Conscience -- And His Party"); published an excerpt on its website; and even conducted a Live Talk with readers to give him more exposure. But newly minted Newsweek editor Jon Meacham went beyond that. He's the top celebrity plugging the book on the back cover.

This shouldn't be so surprising, since Publishers Weekly praises the new book's excoriating vigor: "Danforth oozes sincerity and good sense as he excoriates "Christian conservatives" (naming James Dobson, Jerry Falwell, Ralph Reed and Pat Robertson, among others) for corrupting religious doctrine on reproduction and marriage and inappropriately inserting it in government." Meacham is no less enthusiastic:

"With passion, clarity, and common sense, John Danforth has given us a great gift: a lucid, powerful book that is at once reflective and instructive. By candidly writing about his own unusual pilgrimage through what Roger Williams called 'the wilderness of the world and the garden of the church,' Danforth -- priest and politician -- sheds light on the complexities and ambiguities of religion and politics. Jesus once told his followers that 'in this world ye shall have tribulation, but be of good cheer,' and, reading Danforth, one is heartened anew that if we all conduct ourselves with humility and a sense of history, we shall find fresh cause to be of good cheer as we face the storms of the present."
-- Jon Meacham, managing editor of Newsweek and author of American Gospel: God, the Founding Fathers, and the Making of a Nation

Meacham had not yet been promoted when the Danforth book went to press. But the association between the liberal journalist and the liberal Republican, both Episcopalians, is commonly made. When Meacham was awarded an honorary doctorate at the Yale Divinity School in 2005, they exclaimed, "You have shown a leadership in both the media and the church that is deeply religious without frivolous pietism. You are what Senator John Danforth calls a 'moderate Christian soldier.'"

PS: My favorite sentence in the Danforth online chat is this fractured scriptural one:

John Danforth: I believe that God created and loves all humankind and embraces all of us. I do not think exclusivity with respect to religion is consistent with the message of the Gospels.