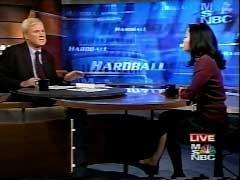 Geoff Dickens had the low-down first on Chris Matthews smiling through kooky Green Party gubernatorial candidate Malachy McCourt's talk about how he'd favor execution if the criminal was Pinochet or George W. Bush. It must depend on which politician is being criticized. On August 19, 2004, when columnist Michelle Malkin suggested it was possible John Kerry may have wounded himself in Vietnam, Matthews huffed after Malkin was evacuated, "We're going to keep things clean on this show. No irresponsible comments are going to be on this show."

After Matthews pounded Malkin on how the Bush campaign should force the withdrawal of the Swift Vet ads, it was comical how out of control Matthews became. He wouldn't let Malkin speak for more than a few seconds without interrupting with outrage. See how very different Malkin was treated, compared with the execute-Bush joker. San Francisco Mayor Willie Brown argued there was no question Kerry was shot in Vietnam, so what else was there to ask?

Video clip of Matthews pouncing on Malkin as he deliberately misconstrued her assertion Kerry suffered a “self-inflicted wound” to be an accusation “he shot himself on purpose” (2:10): Real (3.7 MB) or Windows Media (4.2 MB), plus MP3 audio (650 KB) [Transcript follows.]

Malkin: "Why don't people ask him more specific questions about the shrapnel in his leg?"

Willie Brown [the other guest]: "He didn't get shot at in Alabama..."

Malkin: "There are legitimate questions about whether or not..."

Matthews: "What do you mean by self-inflicted? You say he shot himself on purpose? Is that what you're saying?"

Matthews: "I'm asking you a simple question. Are you saying he shot himself on purpose?"

Malkin: "I'm saying that some of these soldiers..."

Malkin: "And I'm answering it."

Matthews: "Did he shoot himself on purpose?"

Malkin: "Some of those, some of the, some of the soldiers have made allegations that these were self-inflicted wounds."

Matthews: "No, no, no one has ever accused him of shooting himself on purpose."

Malkin: "These, that these were self-inflicted wounds."

Matthews: "No, no, are you saying he shot himself on purpose?"

Brown: "Chris, that is the most irresponsible thing that..."

Matthews: "Are you saying he shot himself on purpose? I want an answer yes or no, Michelle."

Malkin: "Some of the veterans say..."

Malkin: "Yes. Some of the veterans say that!"

Matthews: "No one has ever accused him..."

I didn't get this transcript from the actual program, but from the replay that "Hardball" put on the next day, as reporter David Shuster came in and defended his boss:

Shuster: "No, none of them say that. What they do say in their book is that John Kerry, quote, ‘got hit by a piece of shrapnel from a grenade that he had fired himself. He fired it too close to the shore, and it exploded on a rock or something.’ If that actually caused Kerry's injury, it would be called in military terms a self-inflicted wound. But to the military, it is a descriptive term, not a damning one. And there is still no evidence Kerry intended to harm himself."

Matthews: "Is there a direct accusation in any book you’ve ever read in your life that said John Kerry shot himself on purpose to get a credit for Purple Heart? On purpose? On purpose? Yes or no, Michelle?"

Matthews: "Did they say he did it on purpose?"

Malkin: "There are doubts about whether or not..."

Matthews: "There are doubts about, that's..."

Malkin: "... there was intense rifle fire or not."

Malkin: "And I wish you would ask these questions of John Kerry instead of me."

Matthews: "I had never heard anyone say he shot himself on purpose."

Malkin: "Have you, have you tried to ask?"

Matthews: "And I haven't heard you say it."

Malkin: "Have you tried to ask John Kerry these questions?"

Matthews: "If he shot himself on purpose? No, I have not asked him that."

Malkin: "Have you, don't you wonder?"

I just transcribed the rest of this today. With a stern face, Matthews went to commercial: "We're going to keep things clean on this show. No irresponsible comments are going to be on this show."

After the commercial, Matthews returned with Dana Milbank and David Gergen, and continued his protest: "Dana, what did make of that exchange we just had with Michelle Malkin there, saying that there's rumors out there, there's certain people out there that say John Kerry shot himself on purpose to get a Purple Heart. This is how bad it's gotten, I think."

When Milbank suggested that was a new one, Matthews whacked away again: "I think it occurred right here to our, our problem here. I hope I corrected it. Nobody who's watching now -- believe that, until you get some facts on a case like that. Don't believe that one. Til you know that it's a fact."

Ironically, of course, Malkin was trying to urge Matthews to seek the facts, instead of suggesting that fact-seeking was out of bounds.

In the original CyberAlerts in 2004, there were these items:

On August 23, we recounted Malkin's column on the brouhaha, and how Keith Olbermann stepped in to support John Kerry, who had not yet "won" Ohio.

On August 25, we recounted how Matthews whacked Malkin again on his show on the Monday, August 23 edition of Hardball.

On September 2, Sen. Zell Miller told Matthews not to pull another Malkin beating, with his own talk of lethal force: "I wish we lived in the day where you could challenge a person to a duel. Now, that would be pretty good. But don't ask me, don't pull that, don't pull that, wait a minute, don't pull that kind of stuff on me like you did that young lady when you had her there brow-beating her to death. I'm not her."
Matthews: "She was suggesting, let me tell, she was suggesting-"
Miller: "You get in my face, I'm gonna get back in your face."
Matthews: "-that John Kerry purposely shot himself to win a medal, and I was trying to correct the record."

We later made fun of Matthews -- we made up a sound-alike Terri Schiavo exchange -- in the 2005 April Fools Edition of Notable Quotables.

Malkin also wrote a blog post about her experience.