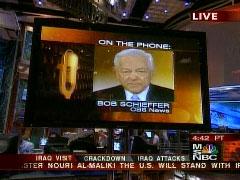 Outgoing CBS Evening News anchor Bob Schieffer is a man who's never been ashamed to portray himself as not always the first guy to get the news -- or stay with the news as it happens. (Remember how he took a nap as Trent Lott destroyed his career? It's the last quote here.) MRC's Brian Boyd reports it happened again this morning on the Imus simulcast on MSNBC at 7:42 AM EDT:

Don Imus: “Hey, how about Hillary Clinton getting booed at this liberal gathering in for her stance on . Did you hear about that?”

Imus: “What are the details of that, Bernard, do you know? Of course, Bernard, not even pretending to pay attention.”

Charles McCord: “Just that they were at this liberal gathering, they booed her for opposing a set date, a date certain for pulling troops out of . And she quickly went on then to talk, you know, turned her attention to other matters saying her party needs to speak to middle class Americans and overcome disagreements.”

Schieffer declared, “Well, this war has become so polarized that you’re not going to get anybody off their positions now," master of moldy conventional wisdom that he often is, and declared that the 2008 presidential race is still wide open. (Imagine that.)

Dan Balz stays on the Hillary's Really A Centrist beat this morning by reporting it in the Washington Post with the headline "Liberal Activists Boo Clinton." (Yes, there was some booing, and she also received a standing ovation, but that contradicts Dan's line.) The Balz story concluded:

One Clinton adviser dismissed questions about whether the senator had sought to draw dissents from the crowd as a way to burnish her credentials as a strong-on-national-security centrist. "She had enough respect for her audience not to pander or duck the issue," said strategist Howard Wolfson.

Schieffer also could have read about it in the New York Times this morning, a story by Adam Nagourney and Robin Toner headlined "Clinton and Kerry Show Democratic Divide on Troop Withdrawal." It made no real attempt to boost Hillary as a strong centrist.