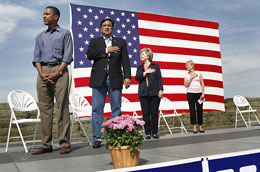 I was checking out CNN's election returns this evening when I came across an interesting article by Roland Martin, one of CNN's resident excuse makers for Barack Obama.

The article, Commentary: Make wearing a flag pin the 28th Amendment, is listed as one of the site's most read articles. I already knew what I would be getting into by reading the article. It turned out exactly as I had expected, a typical liberal defense of Barack Obama's patriotism as done by diminishing others; especially those that dared question the anointed one on the issue by classifying them as zealots.

See, if it is so important, then take it all the way. Don't make it optional. Don't leave it up to someone to choose to wear a flag lapel pin. Let's really show those politicians that nothing is more important to us than seeing them with the U.S. flag on our chest.

That's what zealots do. They take something so simple, so personal, so voluntary, and absolutely lose their mind, trying to force someone else to do as them, and everyone else be damned.

Martin began the screed that led to the above conclusion with a typical lowering the bar defense. This tactic is designed to make questions regarding Barack Obama's patriotism much less relevant by making others seem less patriotic in comparison.

I've watched this debate reach the levels of absurdity this year because journalists and commentators have raised the question to Sen. Barack Obama, "Why don't you wear a flag lapel pin?"

I really got a kick out of that one during the ABC debate last month because not one person on stage -- Sens. Hillary Clinton and Obama, along with moderators Charlie Gibson and George Stephanopoulos -- bothered to accessorize their attire with a flag lapel pin.

Sen. John McCain has been traveling the globe as the presumptive Republican presidential nominee, and this former Navy pilot often doesn't wear a flag lapel pin.

Of course we all know that the issue isn't singularly one of Barack Obama's lack of lapel pin. And the issue certainly is not answered by questioning the patriotism of John McCain the war hero. I think that Senator McCain proved his allegiance to this country just fine.

However, questions surrounding Barack Obama's patriotism are a different story. They stem from a whole host of issues and events that everyday Americans need answers to. The kind of questions that people typically don't have to ask of leading candidates for President of the United States.

I'm not talking about the kind of pointless questions that Martin is asking:

So, after listening to radio callers and the folks that e-mail various TV shows, maybe we ought to expand this need to express our Americanism even further. Shouldn't we insist that our politicians all begin to sport red, white and blue socks in order to feel good knowing that they are walking as Americans? How about asking officeholders to sport the American colors as undergarments to show that their undying love for the country is so important, they want the flag pressed against their skin?

Ha, ... funny. Get it? American flag underwear. Real laugher. Not.

Sorry bud, those are all the wrong questions. Let's put aside the fact that a President's undying love for his country is so important so as not to lose sight of the questions that Martin should be asking.

For instance, Americans should be asking why Barack Obama is repeatedly having to distance himself from people that are patently America loathing or minimally associated with those who are. Pick any one of them, from Pentagon bombing fugitive and Weather Underground radical Bill Ayers to Robert Malley, one of Obama's Middle East policy advisers that secretly held meetings with Hamas, the Jew-hating America loathing terrorist group.

Unfortunately for Barack Obama, and apparently for Roland Martin, the questions don't stop there. The issue was exacerbated when Barack Obama's photo appeared in Time Magazine while standing in front of the American flag with hands clasped below his waist during the pledge of allegiance.

And then there is the issue of Michelle Obama's mean America tour. It doesn't take a rocket scientist to figure out that Michelle Obama's carefully orchestrated "America is downright mean" message is something that wasn't considered offensive until people outside of the Obama campaign actually started listening to it. Now we simply aren't supposed to talk about it. It's not in America where Americans aren't allowed to debate and yes, question the patriotism of their future leaders. That honor is left for countries like Venezuela, Cuba and North Korea; places where wearing the American flag on your lapel is probably not such a wise choice.

And finally, but I'm sure not least, there is the question about Jeremiah Wright. When your spiritual leader talks like Ward Churchill in daily sermons the questions about American patriotism eventually will come home to roost. Sure, it is in some sense guilt by association. But more so it is guilt by accommodation or guilt by lack of judgment. It leaves people wondering about Barack Obama's acceptance of such hateful messages.

If anything the lack of lapel pin probably seems to some as the exclamatory poke in the eye when considered in conjunction with these other alarming facts. So yes Mr. Martin, it is a big deal to many people who care more about the issue than you do.

As you can read by my commentary, I see the issue of wearing the American flag on your lapel quite a bit differently than Roland Martin. It is important. Not because someone is making you wear it. No. It is important because in America you can wear it by choice, without fear of persecution and in honor of those who made the United States the greatest country in the world. That is after all what the Presidency of the United States is all about. Others who don't see it that way will simply have to reap what they sow.