More Newspapers Go Under, Congress and Google to the Rescue? 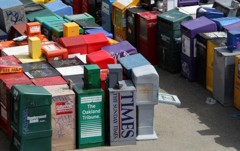 The AP is reporting on a near avalanche of newspapers that are either closing down their print operations or making severe cuts. Apparently things aren't looking up for old media:

The pall looming over U.S. newspapers grew even darker Monday as Gannett Co. informed most of its employees that they will have to take another week of unpaid leave this spring, while a Michigan daily unveiled plans to close its print edition after 174 years. And The Plain Dealer, Ohio's largest newspaper, also ordered pay cuts and 10-day furloughs for nonunion employees Monday to cut costs as advertising revenue drops.

The moves were just the latest sign of the distress afflicting newspapers across the country as they try to cope with a dramatic shift in advertising that is forcing publishers to figure out how to survive with substantially less revenue.

The report is overflowing with newspapers across the country that have been forced to implement more and more drastic cost saving efforts in order to stay afloat. Now, its been clear for quite sometime that the newspaper industry has been hurting but it seems that the situation continues to worsen:

Like most businesses, newspapers have been hard hit by the deepest recession since the early 1980s. But the blow has been especially devastating for newspapers because they were already losing readers and revenue to the Internet, where news can be easily found for free and the advertising rates are substantially lower.

The Internet's allure, coupled with the punishing recession, have caused annual advertising revenue to shrivel by 20 percent to 30 percent at some newspaper publishers since 2006.

Not surprisingly the AP skips over an important factor in these papers' collective downfall. That factor being their obvious, undeniable, and (thanks to NewsBusters) well documented liberal bias. While it is certainly true that old media's failure to quickly adapt to a new media world has been one of the main causes of their struggle it is equally true that their utter lack of professionalism and objectivity has played a key role as well.

After all, if nobody wants to read the worthless dribble you're producing then of course nobody will want to pay to advertise on your worthless dribble. It's simple but true. Yes, even if they were objective and respectable these media outlets would still be hurting in this recession just like everybody else but undoubtedly if they had not alienated large swaths of their potential readership they wouldn't be hemorrhaging cash quite so bad.

Unfortunately for us but fortunately for the papers it looks like they might soon be tag-team rescued by the government and tech giant Google. As Tom Blumer reports here at NewsBusters, Dem Senator Cardin has introduced a bill intended on making it easy for papers to restructure as non-profits:

In the short run, Cardin's bill would give well-to-do Democratic activists, perhaps including many of the "private investors" Tim Geithner is looking at to buy up "toxic assets," a chance to fund the newspaper of their choice and turn it into a pet project for subtly and not so subtly promulgating their worldview. How about the New York MoveOn Times, or the Washington ACORN Post?

Over a longer period, it seems to me that what would develop out of this would be any number of single-city NPRs that would attempt to control the tone of, and access to, political coverage in their respective locales. They would give perfunctory lip service to token print operations, while having large and unfair cost advantages over their taxpaying for-profit competitors.

And, as if that wasn't enough, Michelle Malkin wrote on the absurd demands that old media has given to Google. It seems they don't enjoy having to earn their position in Google search results:

This would be funny if it were not so pathetic. Newspaper publishers want Google to adjust its search engine rankings to give preferential treatment to Old Media. The industry is in trouble and it’s looking for any help it can get — and anyone to blame:

Many publishers resent the criteria Google uses to pick top results, starting with the original PageRank formula that depended on how many links a page got. But crumbling ad revenue is lending their push more urgency; this is no time to show up on the third page of Google search results. And as publishers renew efforts to sell some content online, moreover, they’re newly upset that Google’s algorithm penalizes paid content.

What's worse is that Google may be considering caving to the absurd demands of these hacks:

The really sad part of all of this is that apparently Google is considering changing they way they do things. They’ve held closed door meetings with the big publishers and plan to do so again. If they altered their algorithm and pandered to the cries of the publishers, then the internet would change in the most perverse and profound way in its 20-year existence. If you take away its democracy, you take away its very ethos and the web becomes an evolution of print rather than a new media in its own right.

The supposed decline in "professional" journalism caused by the failure of the old media is far less alarming to me than the solutions that seem to be poping up to save them. Just think about it, what will happen if the New York Times is able to openly accept funding from left wing billionares and then force Google redesign its entire search algorithm in order to make sure that people are reading their work?

That's something that I don't think anybody reading this post would ever want. Yet it's a possibility that is looking more and more plausible by the day.