MSNBC attempted to discredit conservative media on Thursday when Richard Lui brought on Joy Reid, a national correspondent for the network, to eviscerate right-wing news outlets for allegedly exposing Black Lives Matter organizer Shaun King as white. The Daily Caller, Breitbart News,The Blaze, blogger Vickie Pate, and CNN’s Don Lemon have all contributed evidence which strongly suggests the activist is lying about his race. So far these sources have obtained a 1995 police report, a birth certificate, and statements from the family— all of which identify King as biologically white.

Despite all this evidence, Reid, who is a supporter of the Black Lives Matter movement, refused to acknowledge the evidence at hand. Instead, she decided to “set the stage,” and discredit the sources:

We need to set the stage here. The three right-wing websites -- the right-wing blogs that went after Shaun King should be familiar to many people because of a simple name the people should remember, which is Shirley Sherrod. I think before mainstream media takes too seriously the claims of right-wing websites that do have a political/racial agenda, they are stoking racial resentment for their audience, it's what they do. You should remember what happened to Shirley Sherrod at the hands of the late Andrew Breitbart. This is a similar situation.

She then went on to do what any good liberal would do— play the race card:

Shaun King is a very prominent member of the Black Lives Matter movement. Recently he has been among those announcing they are launching a new racial justice initiative specifically focused on policing. That makes you a target of the right. That is what I would say is setting this up. He has become a target because of Black Lives Matter, and specifically because of what those organizations and those activists have been doing around policing.

The liberal correspondent also did excellent investigative journalism, claiming that King is indeed black, because she talked to him about it:

That said, I did talk to Shaun. I can tell you that Shaun King is bi-racial. There’s no reason to doubt that he’s biracial. The stories about what he said regarding getting his scholarship et cetera, 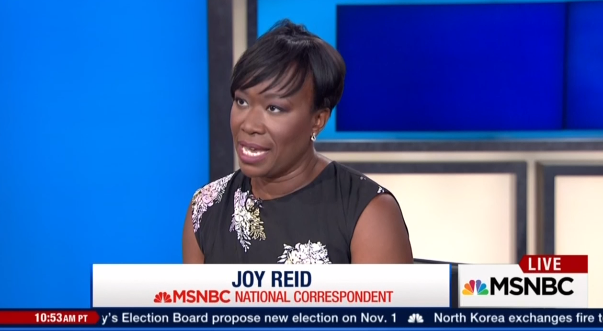 When inevitably asked if this story bears any resemblance to the Rachael Dolezal scandal, she couldn’t connect any dots:

It’s a completely different story. In the Rachael Dolezal case, you had a woman that was white. Who was biologically white. Who decided to assume the clothing of blackness—to put on the garb of blackness because she had affinity with black culture. In the case of Shaun King, This is somebody who’s biological father was black, but he grew up in a white family in a small town in a white context in Versailles, Kentucky. And he had to struggle with both the meaning of his own family story and his own identity. And who essentially grew up in a family that was white. He's an activist, it makes him a target.