The Lefty Media’s Uber-Fringe: Touting Terrorists and ‘Day of Action’

One of the very many things that has been hammered home in the President Donald Trump era - is that if the media wants to make a non-story a story, they certainly can.  At least for them and theirs.

No matter how ridiculous and fact-free the tale.  It can be patently obvious that the “A” they are selling is actually “Not A” - but that matters not.  The media floods the zone with it, and that’s all we get.

Trump-Russia collusion, anyone?  We’re now a year in to the Media-Democrat complex screeching incessantly about Trump collaborating with Vladimir Putin’s Russia to steal November’s election.

The Media-Left has launched another non-story into the stratosphere - the hard Left’s July 12 “Day of Action”.  Put together to protest the Trump Administration rightly, very reasonably undoing the Barack Obama Internet power grabs known as Reclassification and Network Neutrality.

Of course, with the Left insisting that we keep in place these government assaults on the free Web - this little outing should be entitled a “Day of Traction.”  Because the Internet so regulated - is immobilized.

As we have noted, the DC-NY Bubble no longer controls the media narrative.  In the age of social media, that locus has shifted to the Silicon Valley.  As Left as is the Bubble - they have nothing on the radical Valley.  And when it comes to protecting their massive Net Neutrality cronyism - the Valley-led media gets really ramped up.

Amazon Plans 'Day of Action' for Net Neutrality — But Not Netflix

You’ll note that Amazon is a recurring character.  They are funding much of this Day of Nonsense.  Because Net Neutrality mandates that they can use as much bandwidth as they wish (and they use a LOT) - and not have to pay for it.

And speaking of the media - Amazon founder Jeff Bezos owns the Washington Post.  How’s the Post’s coverage of these issues?  Predictably - terrible.

What none of these many outlets will tell you - is how incredibly fringe-y this gathering gaggle actually is.  Though the media’s wall-to-wall advertising campaign (it can’t seriously be called reporting) does much to mask the uber-fringe-ness.

Meet “Day of Action” organizer Evan Greer: “I'm a queer activist singer/songwriter, organizer, parent, speaker, and workshop facilitator based in Boston. i travel the world playing high-energy music for social change and connecting with communities who are resisting oppression. Occasionally I write for reputable places like The Guardian and Huffington Post or appear as a guest on All Things Considered.”

I would posit that - for a variety of reasons beyond just their publishing this guy - these places aren't "reputable."

Greer is the Campaign Director for uber-Left Fight for the Future.  July 12 is their show - and his.  (Using Amazon’s and a host of other Valley companies’ money.)

How pleasant.  Greer’s a Tweeting peach. 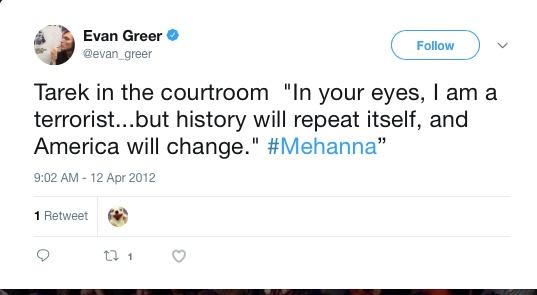 Is Mehanna the only terrorist of whom Greer is a fan?  Of course not:

Who is Rivera?: “Oscar López Rivera…is a Puerto Rican activist and militant who was one of the leaders of the Fuerzas Armadas de Liberación Nacional Puertorriqueña (FALN), a clandestine paramilitary organization responsible for more than 120 bomb attacks on United States targets.”

Who is Shakur?: “Assata Olugbala Shakur…is a black activist, member of the left-wing Black Liberation Army (BLA), who was convicted of murder in 1977. She escaped from prison in 1979 and fled to Cuba in 1984, gaining political asylum.”

Shakur was convicted of murder.  Greer defends her by saying she “never harmed a single civilian.”  Who did Shakur murder?: “In May 1973, Shakur was involved in a shootout on the New Jersey Turnpike, in which New Jersey State Trooper Werner Foerster was killed and Trooper James Harper was grievously assaulted; she was charged in these attacks.”

So Shakur murdered…a cop.  And grievously wounded another.  And Greer’s cool with that.

Greer’s July 12 “Day of Action” - is a radical-fringe, terrorist-loving freak show.  And should be summarily dismissed as the kook-fest it so obviously is.

The media absolutely shouldn’t be promoting this nonsense.

And no Republican anywhere should give a Tinker's Dam what these freaks are saying. Because none of them will ever, EVER vote for ANY of them.

In a sane world.  In the crazy, tiny, fringe-zone that is the Left - all of this is just fine.