Top 7 MOST INSANE Olbermann Tweets on Overturning of Roe: ‘Arrest’ the ‘Terrorists!' 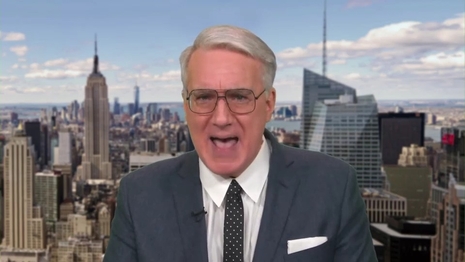 The unhinged breakdown of Keith Olbermann is accelerating. The ex-MSNBC host melted down over the Supreme Court this week. First, he called for nullification after the conservative justices struck down New York’s gun control law. But after the Court overturned Roe v. Wade on Friday, he absolutely lost it, ranting about “theocratic” “terrorists.”

We read all of Olbermann’s tweets so you don’t have to. Here are his top seven most insane responses to the end of Roe. (And remember, this man was employed by MSNBC and ESPN. He now screams into the void at YouTube.)

On Friday evening, the ex-host declared ALL of the conservative justices to be “domestic terrorists” who need to be prosecuted. 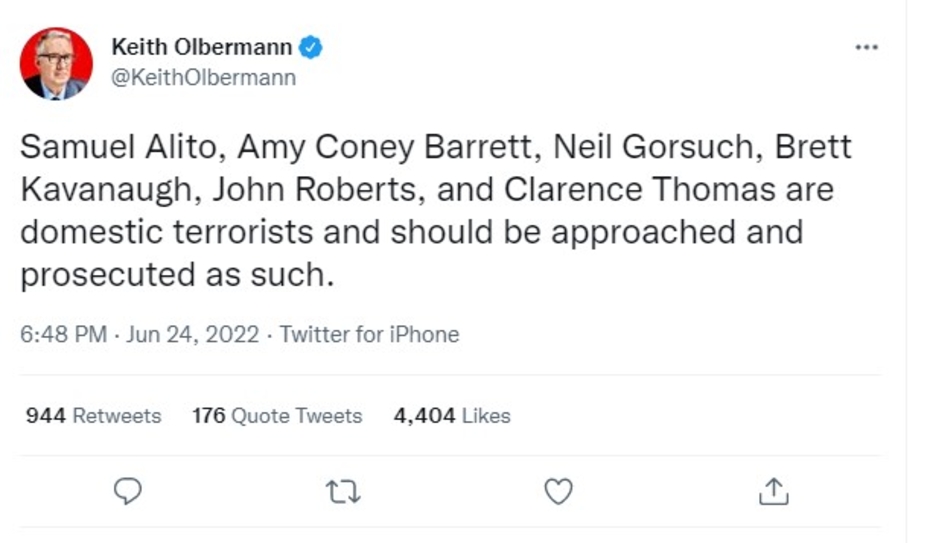 In this brief tweet, Olbermann appears to be calling for violence against the “radical right.” 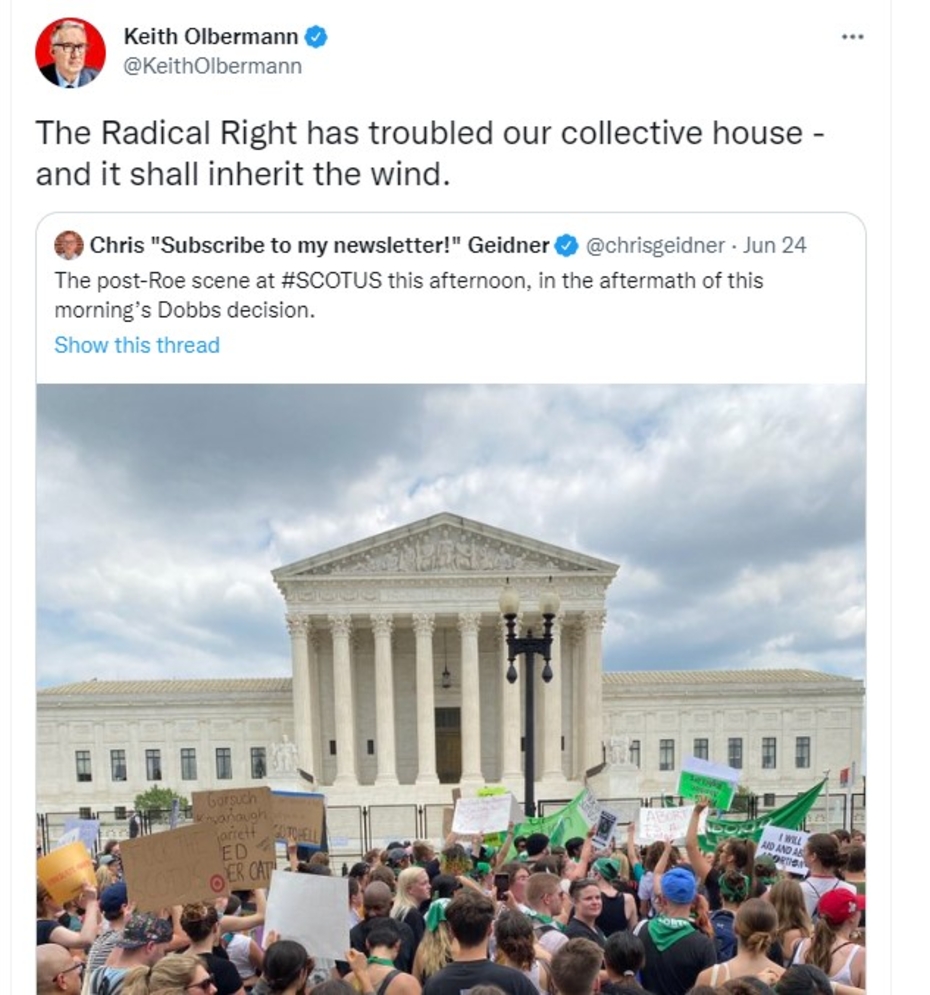 Sometimes it’s hard to understand exactly what the ex-MSNBC anchor is ranting about. He wants the “theocratic creatures” (conservative justices) “indicted” for lying at their confirmation hearings. Also, the Supreme Court must be “dissolved?” How would that work? Olbermann didn’t explain. 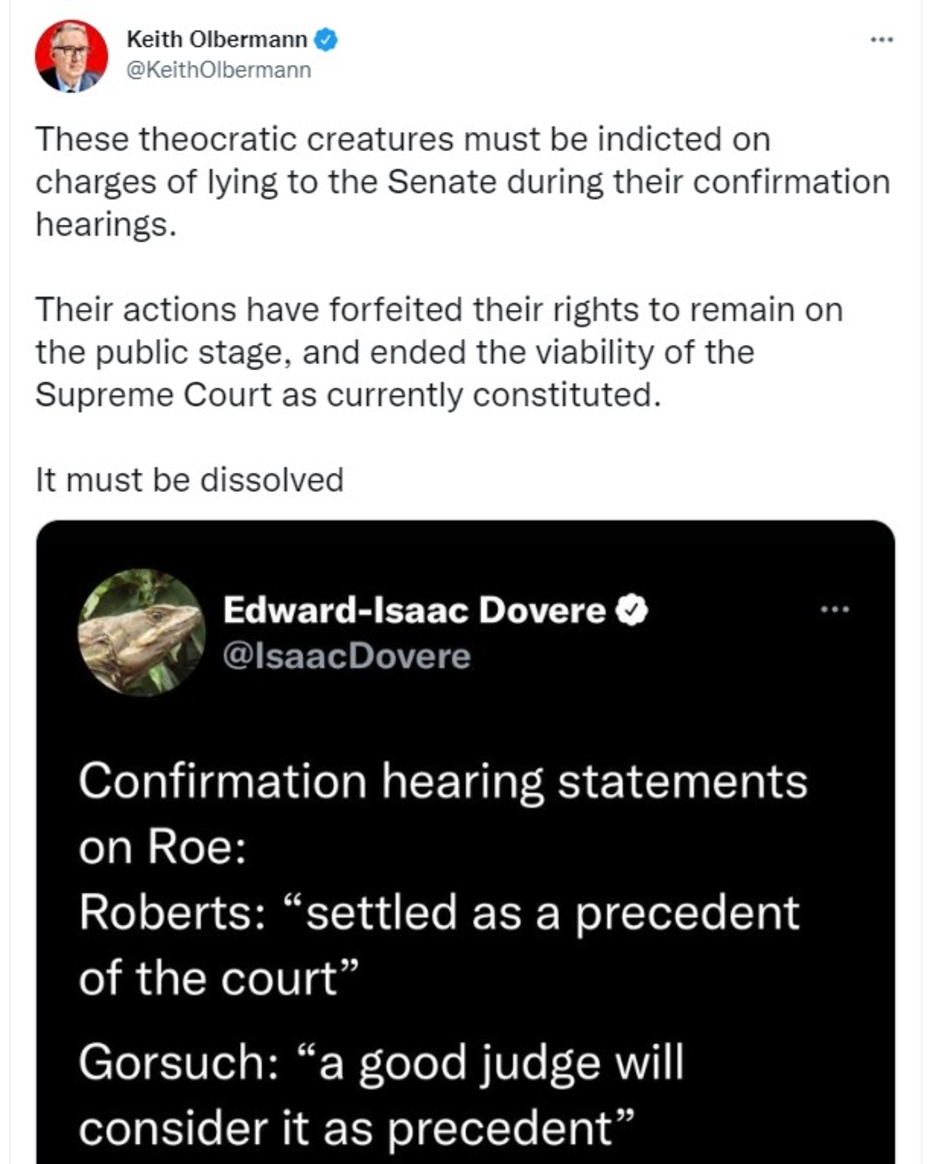 Olbermann is also very unhappy with Democrats, lecturing Joe Biden and Congressman Ritchie Torres. He demanded that the President campaign on codifying Roe in order to fight the “Supreme Court terrorists.” Olbermann chided Biden, “Don’t get sad, get even.” For Torres, the YouTube personality hyperventilated, “Your job is to muster courage and do everything you can to tear down the Supreme Court and the rest of the impending fascist state.” 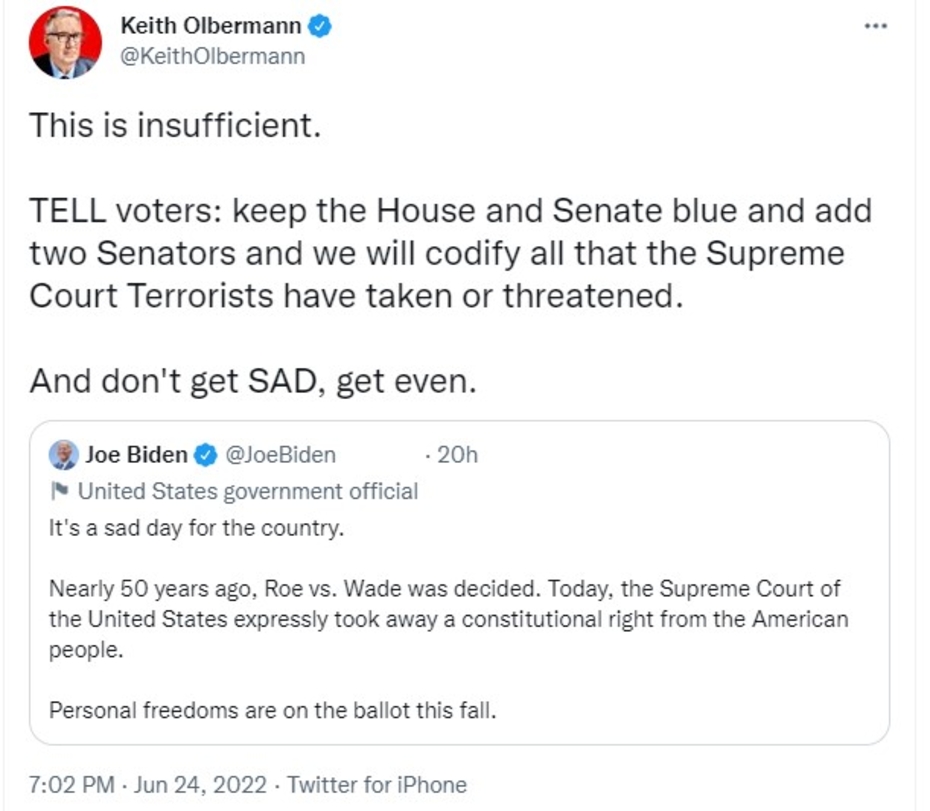 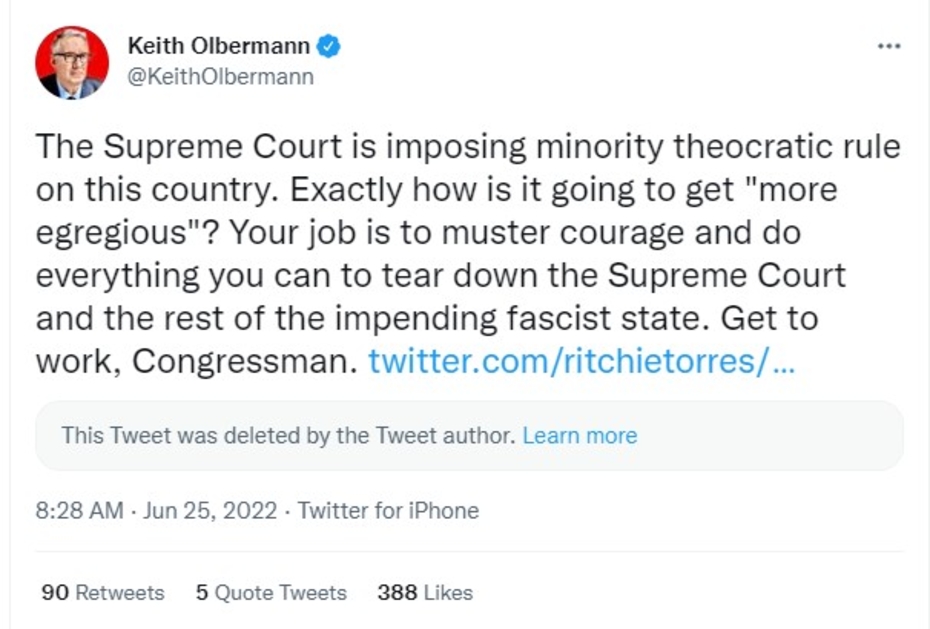 Even though John Roberts only partially signed on to the conservative majority, Olbermann wants him to “resign in shame” in order to “neutralize the religious nuts who have today pushed this country to the brink.” 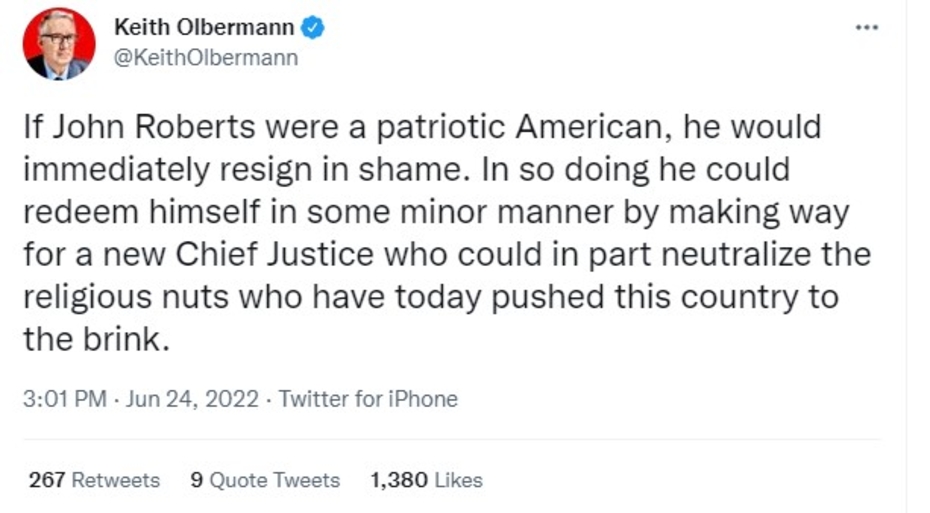 Finally, when all else fails, just scream profanities. Olbermann wants someone to yell “FUCK THE SUPREME COURT AND FUCK THE REPUBLICAN-FASCIST PARTY” on the Senate floor. 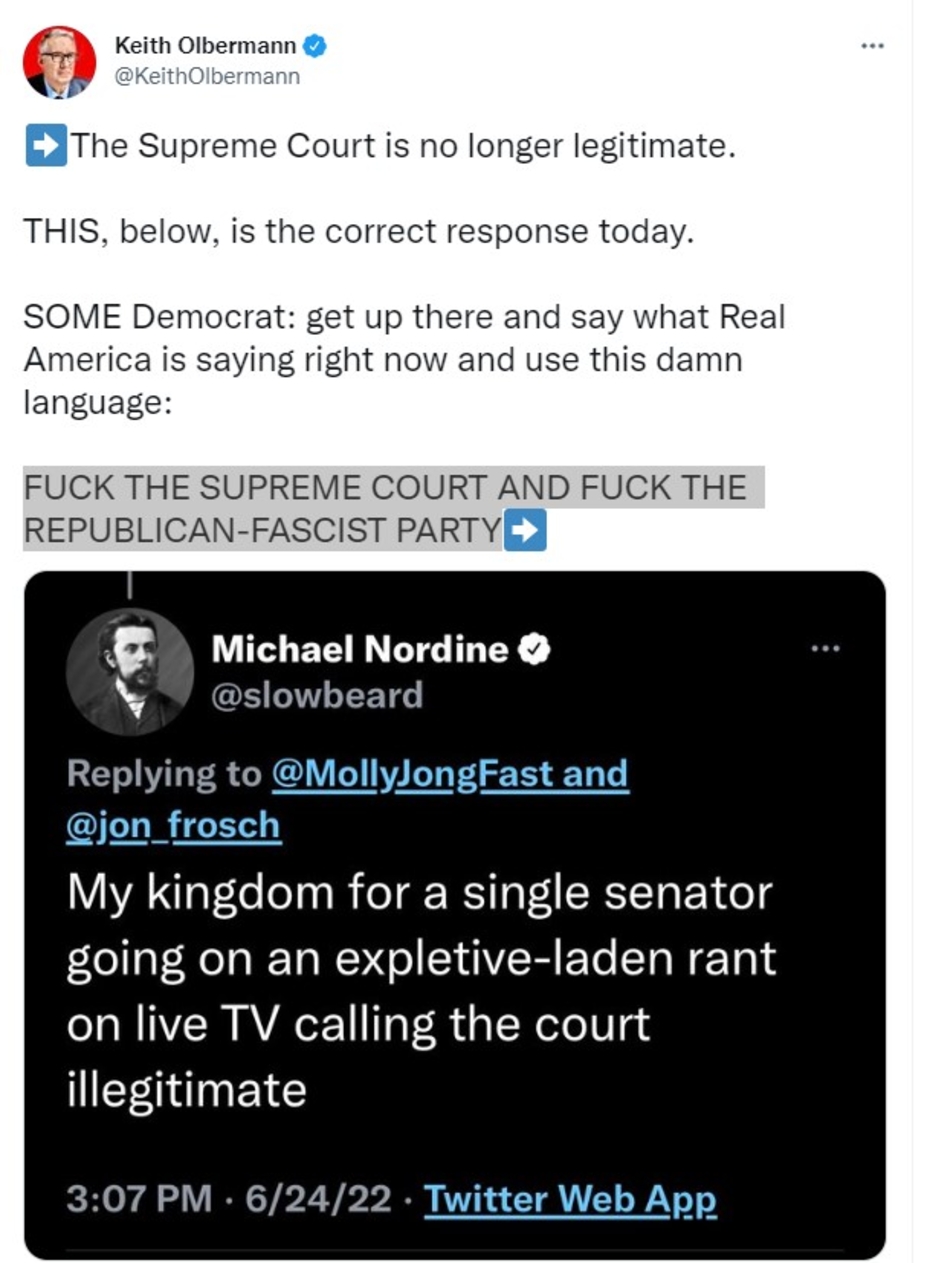 Maybe someone should check on Olbermann. He doesn't seem well.