TERROR: Nets Didn’t Care About Abortion Violence Back Then Either 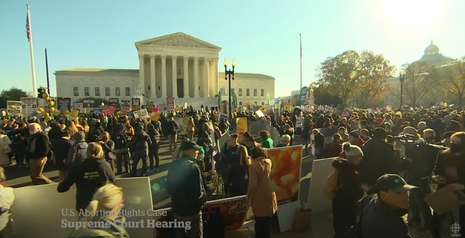 The Supreme Court on Friday released a historic abortion ruling overturning Roe vs. Wade. Journalists reacted with shock and horror. As we’ve exposed in a NewsBusters study on Thursday, however, the networks and MSNBC REFUSED to say the name of the radical pro-abortion terrorists Jane’s Revenge. Yet this is part of a long pattern by liberal networks to hide the violence against conservatives.

The Media Research Center in 1998 re-released an updated study entitled “Roe’s Warriors: The Media’s Pro-Abortion Bias.” Here’s just a few of the examples of violence against pro-lifers that went ignored in the 1990s.

Daniel Adam Mahoney was the first pro-abortion activist indicted under the Freedom of Access to Clinic Entrances Act on April 11, 1995. Prosecutors alleged Mathison called the crisis pregnancy center First Way in Wenatchee, Washington on January 2, 1995 and threatened to kill workers at the office. They also alleged he called the National Life Center hotline in Woodbury, New Jersey and told an operator he was going to shoot protesters outside abortion clinics. This was reported on Associated Press on April 11, 1995 and in a New York Times article on April 12, 1995 by reporter David Johnston. AP then followed up with an April 12 dispatch in which abortion advocates supported the Mathison indictment under FACE. AP also reported on June 7, 1995 that Mathison pled guilty. But none of the other outlets in the print sample reported the story, and neither did the networks.

Patricia Baird Windle founded and owned the Aware Clinic for Women in Melbourne, Florida, one of the workplaces of Dr. David Gunn. Windle was mentioned in 30 news stories in our print sample, often testifying to the extremist tactics of the other side. But none of the newspapers or news magazines covered Windle's arrest for improper exhibition of a dangerous weapon on March 30, 1995. In January 1995, three Brevard County public works employees were driving slowly to inspect recent road work in front of Windle's home when Windle waved a gun at them from her driveway. In July 1995, she pled no contest and was sentenced to six months probation and a gun safety course - without any media attention.

Ernest Robertson Jr. was picking up his wife at a Baton Rouge, Louisiana abortion clinic on October 6, 1994. After arguing with a protester, Robertson took out a 9-mm pistol and shot at him once before his gun jammed. He was charged with attempted second-degree murder. The Robertson story did surface in the sample in The New York Times, and briefly on CNN.

Alice Hand was arrested in January 1995 for making at least three phone calls threatening to blow up a Catholic church and school in Suffern, New York. Hand said she believed the Catholic church was partly to blame for anti-abortion violence. The New York Times ran a 288-word story on page B5 on January 17, 1995. But AP, as well as the other newspapers and magazines, ran nothing.

Gainesville (Florida) Right to Life's offices were firebombed with a Molotov cocktail on February 13, 1993, less than a month before the David Gunn murder, reported the Orlando Sentinel. The incident was never mentioned in AP or the other media outlets.

Take a look at this shocking stat:

While three abortionist shootings drew more than 1,100 stories in three major newspapers and Associated Press, seven cases of abortion-advocate violence or harassment got only six stories, and six examples of abortionists responsible for the death or disfigurement of women drew only 53 stories.

When it comes to the corrupt media’s complete interest in pro-abortion terror: The more things change, the more they stay the same.

To read our study on the media ignoring the pro-abortion terror group Jane's Revenge, go here. To read the 1998 MRC study, go here.