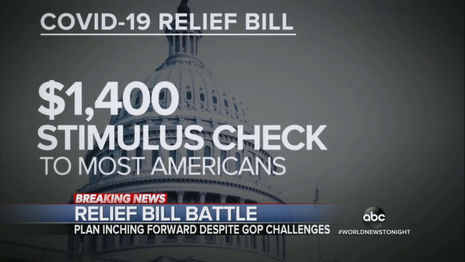 Inflation is out of control, skyrocketing to a 40-year high. This past week, the networks laughably tried to spin a tiny slowing of the rate of inflation, from 8.5 percent to 8.3 as some sort of “sign of hope” and “good news.” All of this is a desperate attempt by the networks to save the floundering Joe Biden and his Democratic Party from disaster in the November midterms.

So don't forget the liberal media were huge cheerleaders for the irresponsible spending that got us here. ABC, CBS and NBC helped the President sell his reckless $1.9 trillion spending spree, as former Media Research Center Research Director Rich Noyes explained in a March, 11, 2021 study.

Noyes noted, “Instead of scrutinizing the bill’s spending choices, the broadcast networks built their coverage around its most popular provision as well as sympathetic anecdotes about those in need.”

Here’s more from the study:

Dissecting this coverage, the networks mainly directed viewers to think about the $1,400 checks to individuals, mentioning this singularly popular line item in about three-fifths of all stories (40). That was twice as often as they talked about the money that would be spent on vaccines and testing to fight the pandemic itself (20 stories). Other top topics: additional unemployment benefits (20 stories), the $15 minimum wage, later scrubbed (19 stories), funding for schools (12 stories) and help to small businesses (12 stories).

What viewers never heard about on these newscasts: How more than $1 trillion in funds previously allocated by Congress had yet to be distributed, and how the much-claimed shortfall in state and local government tax revenues had failed to materialize.

Putting aside the fact that the $1,400 direct payments would go to both the fully employed who do not need it as well as the unemployed who do need help, the individual checks and the enhanced unemployment benefits combined amount to less than 40% of the overall price tag.

During the Trump years, the establishment liberal media championed themselves as truth-tellers who would hold his administration accountable. In covering the first major initiative of the Biden administration, the networks executed a full flip-flop — abandoning any pretense of hostility in favor of providing aid and comfort for a massive spending bill that goes far beyond what’s necessary to help those who are actually in need.

So, once inflation spiraled out of control, how did the networks react? On November 15, 2021, Biden signed a bloated infrastructure bill into law. The next day, the networks spent 16 seconds on the topic of inflation.

On Thursday, as all this spending has backfired, the networks were in a desperate race to save the Democrats from disaster. On CBS Mornings, co-host Nate Burleson hailed, “There's a small glimmer of hope for Americans struggling with rising prices. The rate of increase in inflation slowed very slightly last month.”

On NBC’s Today, co-host Hoda Kotb saw the tiny change as “a sign of hope” for the economy: “New numbers on inflation show it is slowing down slightly. We're live with that new sign of hope affecting your bottom line.”

The networks are trying to save Joe Biden’s presidency. But given that they were cheerleaders for all this spending, they’re also trying to save their own tarnished reputation.