It has now been 259 days — 37 weeks — since July 12, 2021. That’s when any of the corrupt network newscasts last uttered the words “Hunter Biden.” Scandal after scandal, nothing seems to shake the determination of the ABC, CBS, and NBC morning and evening news shows to keep the public from knowing about the President’s wayward son and his sketchy financial and foreign dealings.

This network silence continued as The New York Times belatedly — but still shockingly — confirmed on March 16, 2022 that Hunter Biden’s laptop is real and not an example of Russian disinformation.

Twelve days ago, the Times highlighted e-mails it obtained “from a cache of files that appears to have come from a laptop that was left abandoned by Mr. Biden in a Delaware repair shop.” In the nearly two weeks since that concession, the morning and evening newscasts on ABC, CBS and NBC have allowed ZERO coverage, totally censoring the revelation. 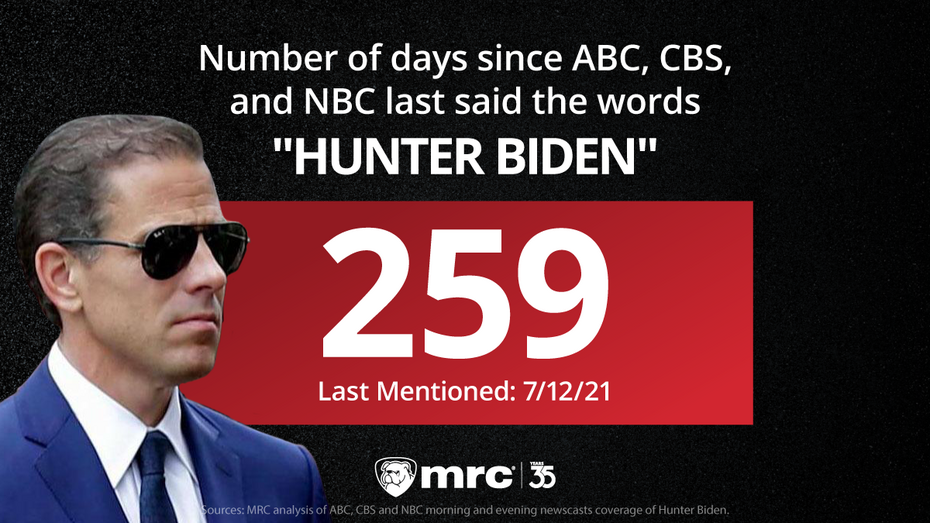 But that shouldn’t be shocking because you have to go back to July 12, 2021 to even hear the name “Hunter Biden” spoken on a morning or evening newscast. Now, obviously, that was long before the confirmation by The New York Times, but it was the LAST mention.

The topic then was the dubious sales of prints by the newly minted “artist” Hunter Biden. Here is NBC Nightly News anchor Lester Holt last summer highlighting the sketchy art sales: “Now to an NBC News investigation into the secret sale of art by President Biden’s son, Hunter. The asking price? Up to half a million dollars per painting.” He warned, “But ethics watchdogs are blasting the arrangement.”

And that’s it. July 12, 2021. For CBS, the last mention came on the July 10, 2021 CBS This Morning. For ABC, it was all the way back on the April 30, 2021 World News Tonight. And that was only a brief mention from reporter Pierre Thomas: “Giuliani's lawyer telling ABC News, the feds are looking to see whether Giuliani was working as a foreign agent for clients in the Ukraine while he was pressuring that government to investigate Joe and Hunter Biden.”

NBC (and the other networks) failed to follow-up in October when the tiny art gallery (they have two employees) representing the Biden son had its small business loan skyrocket from $150,000 to a total of $580,000. In October, when prints of the younger Biden’s art sold for a combined $375,000, the networks were similarly silent.

CBS’s 60 Minutes on October 25, 2020 scoffed at the reality of the Hunter Biden laptop. Anchor Norah O’Donnell dismissed, “In the closing days of the campaign, Joe Biden has been forced to address new and unverified claims that he was involved in his son Hunter’s foreign business dealings.”

In un-aired footage released by the Trump White House, Lesley Stahl scolded the then-President for talking about “unverified information.”

DONALD TRUMP: Of course it can be verified. Excuse me, they found the laptop. Lesley, Lesley.

LESLEY STAHL: It can’t be verified.

TRUMP: What can’t be verified?

These journalists who ignore the reality of the e-mails now are nothing more than Laptop Truthers and they should be treated as such: Media outlets who are so invested in a conspiracy theory, that they won’t accept the truth.

(ABC entertainment shows mentioned Hunter on March 21, 2022 when Jimmy Kimmel made a joke about Donald Trump “making up stories about Hunter Biden.” He was also mentioned on the March 17, 2022 edition of The View. But not the morning or evening newscasts.)

A poll conducted by the Media Research Center in November of 2020 found that 45 percent of Biden voters were unaware of the story. According to then-MRC Research Director Rich Noyes: “Full awareness of the Hunter Biden scandal would have led 9.4% of Biden voters to abandon the Democratic candidate, flipping all six of the swing states he won to Trump, giving the President 311 electoral votes.”

Twelve days after the Times confirmed that Hunter Biden’s laptop is real, ABC, CBS and NBC are still silent. They need to say his name, report on this controversy, and all the other Hunter Biden scandals.