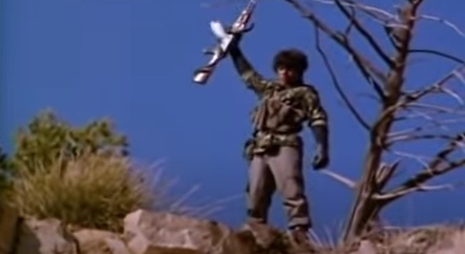 Discussing the 1984 John Milius film, retired four-star Admiral James Foggo wrote recently in The Hill: “Red Dawn is a story about a communist invasion of the United States, led by Cuban surrogates, who were trained and equipped by Soviet advisers. In the final analysis, it did not go well for the Russians. The current parallels to the conflict in Ukraine are obvious.”

Many conservatives love Red Dawn. Former Secretary of State to Ronald Reagan Al Haig praised the movie, telling the Los Angeles Herald-Examiner on August 15,1984: “It captures the stresses of patriotism, the emotions of love and, above all, the futility of war.”

The film also has a strong following in the military. The 2003 operation that captured Saddam Hussein was called Red Dawn. Code name: Wolverine. (In the movie, the  “wolverines”  were the young rebels fighting off the communists.)

But that’s not how the outraged liberal film critics saw it in the summer of 1984. Roger Ebert told his Siskel and Ebert colleague Gene Siskel: “I think this movie is corrupt from beginning to end. And one of the problems I had with it is that it makes a very definite political statement.” A political statement in a movie? Not exactly rare. Except that this one was a conservative point of view and that’s what angered Ebert.

In the film, the resistance uses privately owned guns to fight off the Russians. Ebert raged about Red Dawn’s pro-Second Amendment outlook: “In other words, people should have handguns. They shouldn’t be registered.” He weirdly complained, “There was a whole right-wing ideology that the picture itself doesn’t deserve.”

On August 10, 1984, Washington Post film critic Rita Kempley began her hair-on-fire review this way: “Director John Milius, the barbarian behind Conan, co-wrote this anti-gun-control, anti-Communist, survivalist script with Kevin Reynolds. Sick and silly as it is, the idea could have been intriguing, had it gone anywhere, which it didn't.”

Kempley simply couldn’t get past the film’s conservative overtones, like the anti-gun control message:

And talk about enemy intelligence: The Russian commander's first order when he takes over the town is: "Go to the sporting goods store and get copies of form 443S. And find out the private ownership of the weapons." The registered gun-owners are then taken off and shot. It's an NRA nightmare come true.

The August 10, 1984 New York Times huffed that the film is “incorrigibly gung-ho” and has an excess of “machismo.” Regarding a scene where the invading Soviets execute Americans, NYT film critic Janet Maslin complained:

They sing ''America the Beautiful'' just before they're shot - but their patriotism is not in question, and the movie might have been a little less overbearing without the song.

Despite the contempt of liberal journalists, the film has endured almost 40 years later, even being remade with North Korean villains replacing the communists in 2012. In 2009, National Review named the original the 15th best conservative movie of all time. NR described the spirit of Red Dawn as “truth,” saying:

The truth that America is a place and an idea worth fighting and dying for will not be denied, not under a pile of left-wing critiques or even Red Dawn’s own melodramatic flaws. Released at the midpoint of Reagan’s presidential showdown with the Soviet Union, this story of what was at stake in the Cold War endures.