Top 3 Examples of the Nets Burying Horrifying Pro-Abortion Extremism of Biden, the Left 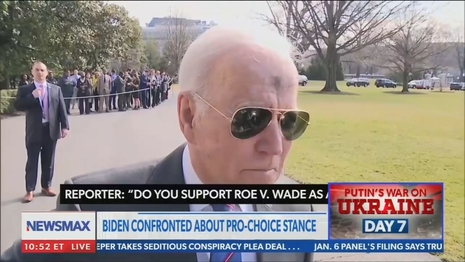 Joe Biden, the Democratic Party and the left’s radical support for abortion grows more extreme every day. That fact was made very clear over the last four days, though you wouldn’t have known it if you got all your news from the networks.

Here's what happened just this week: Senate Democrats tried (and failed) to codify a right to abortion up to birth. On Wednesday, Biden was shockingly pressed by a lone reporter on being a Catholic and yet championing abortion. And it was emphasized that Supreme Court nominee Ketanji Brown Jackson supported muzzling the free speech of pro-lifers.

On Wednesday, the President, wearing ashes on his face to observe Ash Wednesday, was surprisingly asked this question at the White House: “As a Catholic, why do you support abortion?... Defying church teachings.” The moment became more dramatic because First Lady Jill Biden came over and tried to drag her husband away from answering the question.

Fox News and CNN both covered the moment live. On Newsmax’s Rob Schmitt Tonight, host Schmitt played the video and lectured Biden: “I don't care what your religion is, but own it. If you're going to be a Catholic, do it. Don’t be a pro-choice Catholic.”

CBS Mornings on Monday didn’t bother to cover Biden’s hypocrisy. But, during the show open, they DID play a clip of Biden being asked a different, much more friendly question about what he’s giving up for lent. Biden joked, “You know me. I start off with dessert. No ice cream.”

Here's CBS playing a clip of the Jimmy Kimmel Live moment on Biden:

A skeptic may ask conservatives, could the networks find time to cover this with all the war coverage in Ukraine? Yes. Absolutely. CBS Mornings devoted 8 minutes and 41 seconds to the Disney animated movie Encanto. ABC’s Good Morning America devoted 4 minutes and 25 seconds to interviewing the ‘80s band New Kids on the Block.

For 4 minutes and 57 seconds, NBC’s Today told viewers about “four exercises to get your body moving in the morning.” Given that these examples aren't the most important topics in the world, clearly there was time.

Supporting Abortion Up to Birth

This week, the Democrats tried to advance legislation codifying abortion up to birth. Every Democrat, except Senator Joe Manchin, voted for the radical legislation. It failed 46-48. Senate Minority Leader Mitch McConnell reacted to the bill by condemning, “Yet again our colleagues wish to demonstrate that the radical left fringe runs today’s Democratic Party.”

Strangling the Free Speech of Pro-Lifers

On March 2, CNSNews editor in chief Terry Jeffrey explained, “President Joe Biden's nominee to replace Justice Stephen Breyer on the Supreme Court argued in a federal court case that the government can in fact restrict the freedom of speech on a public sidewalk — in the vicinity of an abortion clinic.”

In 2001, when Judge Ketanji Brown Jackson was a private-sector lawyer, she co-authored an amicus brief in the case of McGuire v. Reilly.

The case was then before the U.S. Court of Appeals for the 1st Circuit, which is based in Boston. Among the many "amici curiae" for whom this brief was submitted were Repro Associates, which is described in the brief as "a women's reproductive health care facility specializing in pregnancy termination," and Mass. NARAL, which is described as "a statewide organization that works to guarantee every woman the right to make personal decisions regarding the full range of reproductive choices."

"Within that narrow zone," said her brief, "the Act makes it unlawful to 'knowingly approach' within six feet of another person, without that person's consent, 'for the purpose of passing a leaflet or handbill to, displaying a sign to, or engaging in oral protest, education of or counseling with such other person ... "

The pro-abortion policies of the Democratic Party, of Joe Biden, and of Supreme Court nominee Judge Ketanji Brown Jackson are radical and extreme. There's a reason the networks are trying to hide them from the American public.

The attempts by ABC to hide the radical pro-abortion extremism of Biden was sponsored by Value City Furniture. On CBS, it was sponsored by Progressive insurance. On NBC, it was McDonald’s. Click on the links to let them know what you think.