Another week, another liberal politician excused for maskless hypocrisy. Past and future Georgia gubernatorial candidate Stacey Abrams appeared in a smiling photo on Friday as she posed in front of dozens of masked third graders. Yet the same ABC, CBS and NBC who routinely fawn over the failed candidate, touting her for vice president or even president, ignored the hypocritical act.

Only Fox and CNN (reluctantly) have covered the cringe-worthy photo. On Monday’s Fox and Friends, Brian Kilmeade offered an exasperated take: “She has no problem doing this, sitting there with it looks like a bunch of third graders.... Sitting there with them without a mask on, big smile on her face.”

The morning and evening shows all weekend and on Monday were silent about the gaffe. CBS Mornings host Gayle King has been particularly fawning over Abrams. Back on June 10, 2020, she talked her up as a potential VP for Joe Biden: “You know it's widely reported you're on the short list for Joe Biden's VP. We talked about it last time you were here. Clearly you're very interested. Have you had recent conversations?”

On May 10, 2021, CBS Sunday Morning hailed her as a “force” and speculated about a presidential run. On November 10, 2020, CBS This Mornings reporter Mark Strassmann gently asked the Democrat about her refusal to concede she lost the Georgia governor’s race: “[You] lost by 55,000 votes. So you've never conceded that race because you believe it was stolen from you?”

Good morning to you, Ms. Stacey Abrams! We are so excited to have you here! So excited to talk about this book.... Your other big news you made earlier this month. You will be running again for governor in Georgia in 2022. This is after that narrow loss three years ago. What will be different for you this time around? 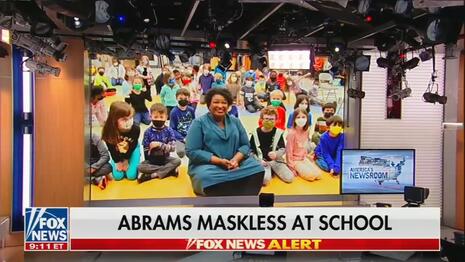 Stacey Abrams is clearly hypocritical when it comes to encouraging masking in schools but not for herself. The same networks that fawn all over her should be covering this gaffe.