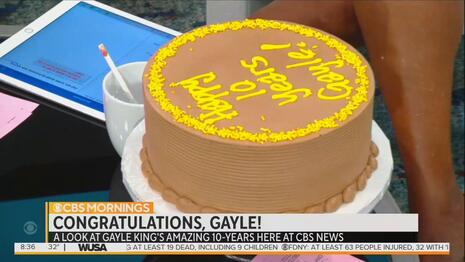 CBS Mornings on Monday celebrated a decade of Gayle King as a co-host on the show, cheering the liberal journalist with a cake and a video montage. There was no mention of King’s history of vacationing with the Obamas or her donations to Democrats.

Though the montage included footage of past hosts like Norah O’Donnell and Anthony Mason, there were no shots of alleged sexual harasser Charlie Rose, another former co-host.

Dokoupil fawned, “It is your tenth anniversary here at CBS News, and CBS Mornings. And we are celebrating your impressive decade here at the table.” The praise continued: “You have an amazing ability to talk to the most famous and influential people on the planet, most powerful.”

It’s, perhaps, easier to get big interviews with powerful Democrats when there’s no change of a tough question. As I wrote in a 2018 NewsBusters analysis of King:

If donating only to Democrats wasn’t enough, in 2017, King has vacationed with them as well. The CBS co-host enjoyed a trip on a yacht with the Obamas, angering actual journalists within CBS.

King ridiculously tried to defend the trip, spinning, “My vacations are not political and so I went on vacation with a great group of people and, to me, that's not a political statement.” Last we checked, she hasn’t gone on yacht vacations with members of the Trump family.

The video montage ended with a cake and co-host Nate Burleson heaping on more praise: “You bring that energy. You are one of the best in the business.” At no time did anyone mention the anniversary segment mention the five and a half years King co-hosted with Rose.

During that time, she worked with Rose as he allegedly harassed and abused at least 27 women. On May 3, 2018, after the scandal was exposed, King whined on-air about having to cover it: “I don't know what to say about this.... I don't know what more we can do to Charlie Rose except a public flogging. He's gone.... I’m sick of handling it.”

After some blowback, she retreated on May 4, 2018, saying of the Rose inquiry: “Let the chips fall where they may.” CBS also promoted a 2018 conspiracy theory as for the reason behind the sexual harassment allegations against then-CEO Les Moonves.

The fawning over the liberal King was sponsored by Ensure and Xfinity. Click on the links to let them know what you think.

A partial transcript of the segment is below. 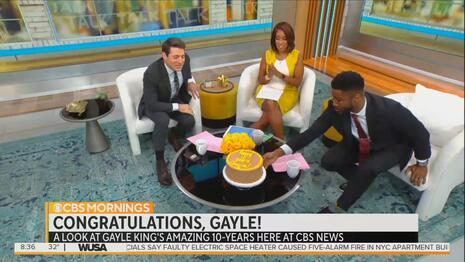 TONY DOKOUPIL: My "talk of the table," Gayle, is about Gayle King.

GAYLE KING: The script here says about the dogs.

DOKOUPIL: Trying to fool you.

KING: Okay. Looking forward to that.

DOKOUPIL: It is your tenth anniversary here at CBS News, and CBS Mornings. And we are celebrating your impressive decade here at the table with something that's become a yearly tradition. There's a yellow dress. Why did you wear yellow on day one?

KING: Yellow's my favorite color. Yellow is my happy place. So, believe it or not, I spend a lot of time trying to decide what to wear. Alex Kramer made this dress for me years and years and years ago. And I just —  yellow makes me happy. And I wanted to feel happy on that day. I was very nervous. And it wasn't nervous about, oh, god, I don't know if I can do it, it was nervous because you wanted to do a good job. So, we were all feeling that. Everybody in this room was there that day. We were all feeling we just wanted this program to work.

DOKOUPIL: You are a trusted, authentic, hard-working journalist, and you've had a lot of big interviews over the years. We're going to look back at a few of them, as well as some of the tougher stuff. Your coverage from the border, the U.S./Mexico immigration crisis there. Presidential interviews. You got in a tunnel with Elon Musk.

DOKOUPIL: Big interview there. George Floyd coverage. That was sad, difficult stuff. The me too movement, everyone remembers R. Kelly. Jeff Bezos. You have an amazing ability to talk to the most famous and influential people on the planet, most powerful, but at the same time, this is just the nature of our work, you often end up having to have conversations with regular people on the worst day of their lives.

DOKOUPIL: And it's difficult stuff, and you put them at ease.

DOKOUPIL: Welcome them into our living room and to everyone else's, and it's an amazing skill.

DOKOUPIL: We're going to look back on all that, plus the fun -- Bruce Springsteen, you went to his farm. You wore overalls.

KING: I begged Bruce Springsteen for that interview for five years to talk to him. I love him.

DOKOUPIL: We'll watch the package and reminisce on the back end.

DOKOUPIL: I still feel that. The best place to be is at the table. I really do. I still — after all this time, still love this job. I just said to the driver coming —  to Jeff, coming in this morning, that when you come on Times Square, it's lights, camera, action. You look at the billboards, everybody's happy and smiling. I feel that way when I come into this building. I think it's an awesome, awesome job. I think it's a lot of -- a privilege, but it's a great responsibility. I don't take it lightly. I love being here with you guys every morning, I do.

BURLESON: You bring that energy. You are one of the best in the business.

BURLESON: You say the same thing every day when you walk in. What do you say?

KING: All in our places, bright shiny faces.