The last three months have been nightmarish for Joe Biden’s presidency. In August, his popularity started to plummet, dropping precipitously so that, by late October, some polls had him dipping into the high 30s as Afghanistan, inflation and an inability to accomplish his domestic agenda have altered a once popular president’s fortunes. But in comparison to Donald Trump, ABC, CBS and NBC had almost double the number of mentions of bad polling for the Republican.

MRC analysts looked at the morning and evening broadcast news programs from August 1, 2021 to October 25, 2021 for Biden vs. August 1, 2017 to October 25 2017 for Trump. While ABC, CBS and NBC mentioned Donald Trump’s unpopularity 37 times, they only noted the rapidly dropping numbers for Biden 19 times. 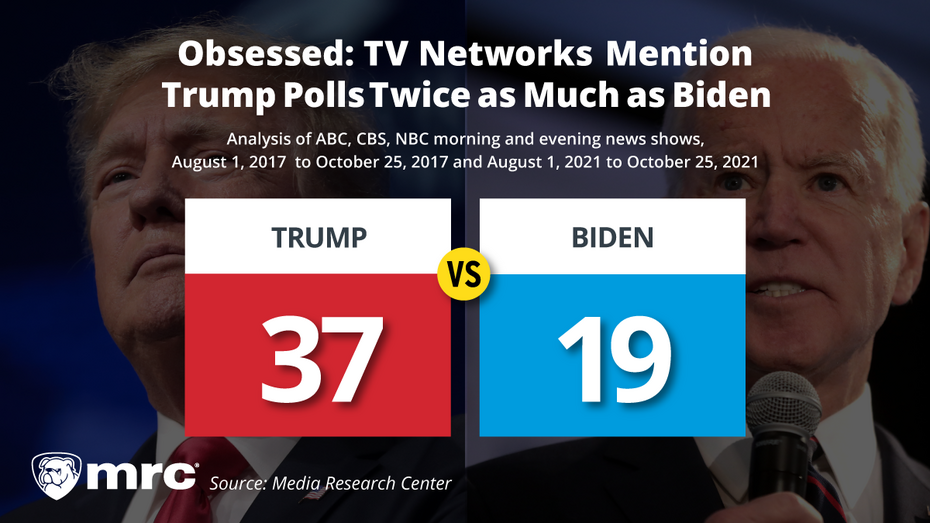 This despite the fact that Biden’s fall is, by far, the bigger news story of the two. In January of 2017, Trump started as an unpopular President, averaging around 44 percent, according to Real Clear Politics. His numbers largely stayed that way for four years. In January of 2021, Biden began as a popular President, beginning with a 55 percent popularity rating. By near the end of October, his average fell to just 42 percent. 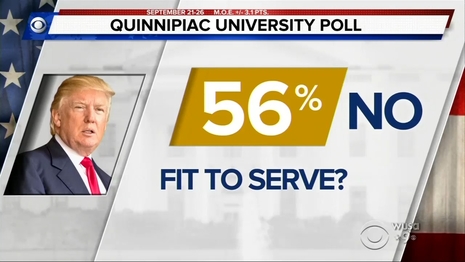 Both Presidents Trump and Biden suffered an awful August. In 2017, Trump faced the violence in Charlottesville, VA after a white supremacist rally. Meanwhile, 2021 had Biden overseeing the collapse of Afghanistan with a chaotic withdrawal that included 13 U.S. service members killed. But in that month, the networks highlighted the “record low” numbers for Trump 26 times. For Biden, August saw only four mentions of his falling numbers.

And while Biden wasn’t as unpopular as Trump was in his respective August, the Democrat had suddenly fallen under 50 percent in 16 of 25 polls in August, an alarming trend documented by Real Clear Politics’s collection of polls.

Additionally, the tone of the bad polling coverage for Trump bordered on gleeful hype. On the August 2, 2017 CBS Evening News, Chip Reid trumpeted, “According to a new poll from Quinnipiac University, 62 percent of Americans say the President is not honest. Seventy-one percent say he is not levelheaded.”

On the September 27, 2017 CBS Evening News, Dean Reynolds used a different Quinnipiac survey to announce: “57 percent of voters disapprove of Mr. Trump’s handling of the job. Fifty-six percent find him unfit to serve, and 51 percent say they are embarrassed to have him as President.” (In the latest Quinnipiac poll, the outfit did not ask if Biden was honest, fit to serve, or what percentage of Americans were embarrassed to have him as president.) 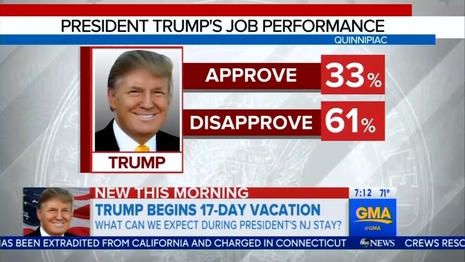 In what could be mistaken for the coming Biden presidency, then-ABC News political analyst Matt Dowd on the August 5, 2017 Good Morning America warned, “[Trump is] at the lowest point of any President has ever been six months going into summer. Augusts usually are never good months for Presidents.”

Kristen Welker, on the August 21, 2017 NBC Nightly News, cited a prime-time address on Afghanistan: “It comes as polls show his approval rating is sagging. With this announcement tonight, Mr. Trump becomes the third President to take on the war in Afghanistan, a conflict he now owns.”

In contrast, the networks offered more matter-of-fact reporting on Biden’s plummet. On the August 23, 2021 CBS This Morning, Ed O’Keefe dryly noted the “President’s overall support is slipping as he’s facing criticism at home and abroad.”

On the October 7, 2021 edition of NBC’s Today, as Biden hit 38 percent in a Quinnipiac poll: Garrett Haake described Biden as simply in need of a “boost”:

Democrats hoping to pass the massive spending plan by the end of October, with President Biden in need of a boost now. A new poll showing his approval rating dropping to 38%, the lowest level of his presidency yet.

On the October 7, 2021 CBS Mornings, O’Keefe echoed this, describing it as “the lowest [poll] yet of his presidency.” But networks were absent talk of Biden not being level-headed or honest. On the September 7, 2021 Good Morning America, Cecilia Vega explained, “Only two presidents in modern history have had lower approval ratings at this stage of the game.”

Perhaps Andrea Mitchell offered the starkest warning for Biden on the October 24, 2021 Today. She compared, “[Biden’s] polls are down. He is down in the low 40s and 30s, in fact, those are Trump numbers in some of the polls.”

Indeed they are. On October 26, 2017, Trump’s Real Clear Politics average stood at 39.3. On October 26, 2021, Biden’s was at 42.4. The two are very close in their level of unpopularity. But, despite Biden’s dramatic and sudden plunge, the networks still found Trump’s static, largely unchanging polls much more compelling.

The Biden presidency is cratering, but network journalists are still in denial, pretending that everything is okay. As the Democrat edges ever closer to constantly being in the 30s, perhaps reality will force ABC, CBS and NBC to stop protecting Biden and start informing the public.