MSNBC Slimed Texas Pro-Life Law as Like the ‘Taliban,’ But Radical Abortion Bill Is ‘Care’

If you want an idea of just how out of touch journalists at MSNBC are, compare the network's reception of Texas’s pro-life law to the radical House Democrat effort to guarantee abortion at any time: It’s violent, slavery-loving, Taliban Christians vs. a simple attempt to “protect access to care.”

On MSNBC, Friday, host Craig Melvin blandly described the bill as “protecting the ability to decide to continue or end a pregnancy.” He simply characterized, “And it also prohibits restrictions on abortion after fetal viability when pregnancy would pose a risk to the patient’s life or health.”

Activist reporter Leigh Ann Caldwell used liberal language to explain: “There used to be a lot of anti-choice Democrats in the party. That is no longer the case.” Anti-choice Democrats? An MSNBC graphic lied: “Soon: House Voting on Act to Protect ‘Access to Care.’” Care? Care for whom? Not babies.

Here's what is actually in the bill, according to National Review:

Among other provisions, the bill, known as the Women’s Health Protection Act, would require states to allow abortions of an unborn baby viable outside the womb if one physician determines that an abortion would protect the woman’s health. The bill would likely supersede state laws mandating a 24-hour waiting period prior to an abortion procedure, as well as bans on sex-selective abortions.

This is quite a contrast to how the network covered the Texas law. On September 2, Eddie Glaude compared the provision in the Texas law that allows citizens to sue abortion providers to the Fugitive Slave Law:

But I also have this kind of historical analogy and it’s gonna sound rather strange initially, but the Fugitive Slave Law of 1850, what it did, right? It said that every private citizen had an obligation to return a fugitive slave to their owner. And what it did, it forced a choice onto the nation, are you going to be individually complicit with the institution of slavery, you see. And so now this private citizen bounty, right, in so many ways intensifies the choices that are being made by everyday, ordinary people.

On September 6, MSNBC journalists warned that Texas will “tolerate violence” against people seeking an abortion. On September 3, a crazed Joy Reid frothed that conservative Christians, like those in Texas, are America’s “Taliban.”

A bit of a contrast to “protecting access to care,” huh?

The radical pro-abortion hypocrisy on MSNBC was sponsored by USAA and Tide. Click on the links to let them know what you think.

CRAIG MELVIN: Also right now, we are keeping a very close eye on the House, because any minute now lawmakers are going to start voting on the Women's Health Protection Act which looks to cement a woman's right to an abortion. It's meant to counter the restrictive laws popping up in states like Texas and Mississippi. A live look at the House floor. Among other things, the bill will protect the ability to decide to continue or end a pregnancy. Enshrines health care provider's ability to offer services prior to fetal viability without restrictions imposed by states. And it also prohibits restrictions on abortion after fetal viability when pregnancy would pose a risk to the patient’s life or health. NBC’s Leigh Ann Caldwell has more. She’s on Capitol Hill. So, explain the urgency among Democrats to pass this bill. And if it does pass the House, what are its chances in the Senate? 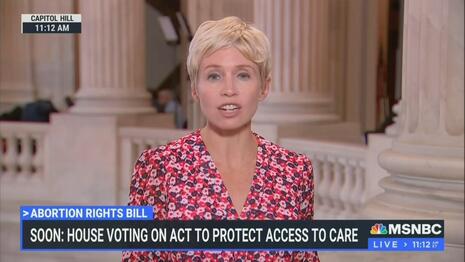 LEIGH ANN CALDWELL: Hey, Craig. Essentially this bill codifies Roe v. Wade into law. Now, this bill has been around for eight years. But this is the first time the House of Representatives is voting on it. The reason which is pretty remarkable, is because this is the first time there has been a majority of pro-choice Democrats who are able to pass this legislation in the House of Representatives. That shows a very stark sign of the times that social issues are now very partisan as well. There used to be a lot of anti-choice Democrats in the party. That is no longer the case. Yesterday Speaker Pelosi was very passionate yesterday, saying that no one has any business to tell a woman what to do. This morning she was a little bit less direct, but just as passionate about this legislation. Let's listen.

HOUSE SPEAKER NANCY PELOSI: This is about freedom. About freedom of women to have choice about the size and timing of their families. Not the business of people on the Court or members of Congress. About themselves. When this court embraced this shameful Texas law, they brought shame to the United States Supreme Court.

CALDWELL So this is expected to pass the house once they vote on it in just a few moments. As far as the chances in the Senate, well, it is not going to get the 60 votes necessary. The only two pro-choice Republicans Susan Collins, Lisa Murkowski. Susan Collins told me she wasn't going to vote for this. It goes too far, and there’s two Democrats. We don't know where they stand on this legislation, Senator Joe Manchin and Bob Casey of Pennsylvania.