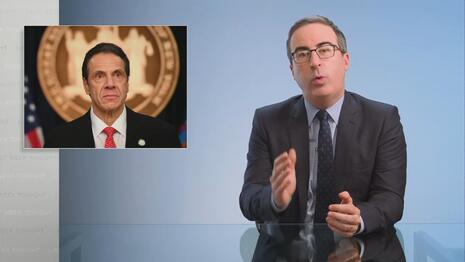 Yet, last year, Oliver barely mentioned Cuomo, cheering his “admirable” efforts. The host didn’t mention Cuomo's role in the nursing home debacle until February 21, 2021. Finally, 33 episodes into the pandemic, Oliver discovered Cuomo’s incompetence. Then, on Sunday, he sneered, “Underreporting nursing home deaths — you'd expect that less from a transparent democracy, and more from an authoritarian regime like north North Korea.”

With the zeal of the convert, Oliver awoke to the idea of speaking truth to power: “What the fuck is wrong with you? Even before the current scandals, there was something gross about Cuomo's glee in his public adulation last year, from his constant appearances with his brother on CNN, to him co-signing on the term ‘Cuomosexuals.’”

Yes, there was something gross about cozy Cuomo and his CNN brother Chris laughing together, despite the botched decision to put COVID-positive patients in with nursing home residents. But you wouldn’t have known that from Oliver in 2020. This is, after all, the same Cuomo who brother Chris described as “single and ready to mingle” and also the “luv gov.” Oliver could have been mocking the Cuomos and CNN.

I examined every episode of Last Week Tonight since the coronavirus started through February 21, 2021 – 33 episodes. The Democratic governor is only mentioned five times in over a year. All the mentions are brief and some are positive.

On March 29, 2020, Oliver praised the “admirable” job: “If I'm honest, I never really liked Andrew Cuomo before this, but I'll admit, he's doing admirably well. And I can't wait to get to the other side of this when I can go back to being irritated by him again." On April 5, 2020, he critiqued Cuomo for not stopping the spread of COVID... in prisons:

Others, like Andrew Cuomo in New York, have aggressively managed the crisis, although he has been dragging his feet on mitigating the spread within New York's jails and prisons, which is not ideal.

Somehow, the spread of coronavirus in prisons shocked the host, but not nursing homes. It wasn’t until February 21, 2021 that Oliver mentioned it and he sandwiched it in a nasty joke about the death of Rush Limbaugh:

Look, it's been an unpleasant week, from New York governor Andrew Cuomo admitting to withholding information about Covid deaths in nursing homes, to the release of grim unemployment numbers, to the death of Rush Limbaugh. Makes a ["so-so” hand gesture.] So, you know, eh.

On Sunday night, Oliver bashed Cuomo for making up fake quotes during his press conference, concluding by hammering the “colossal asshole” Cuomo:

Circulating fake quotes is obviously not the worst thing Cuomo's done. That is becoming increasingly clear. But it does feel like a pretty apt metaphor for an administration that has aggressively managed facts to fit its chosen reality. And it actually brings to mind another insightful saying: "Andrew Cuomo is a colossal asshole." It's from an excellent writer named T.J. Pimpernickle. And I'll tell you exactly two things about T.J. Pimpernickle: One, he is a person I totally made up, and two, he's also completely right about Andrew Cuomo.

There is nothing edgy or praise-worthy about belatedly challenging Cuomo. It’s tardy and shows that Oliver is a follower, not a speak-truth-to-power leader. The HBO host is all about protecting Democrats (see his handling of Tara Reade). In Cuomo's case, it's too little and too late.

A transcript from Sunday is below.

JOHN OLIVER: But we're actually going to start right here at home, with New York's governor, Andrew Cuomo. A man whose face, build, and general demeanor always seems to scream "Business Frankenstein." Cuomo has been in some hot water lately.

OLIVER:  Underreporting nursing home deaths -- you'd expect that less from a transparent democracy, and more from an authoritarian regime like north North Korea, which to this day has yet to report a single case of coronavirus. I assume their state media is claiming that the virus was repelled from the country after Kim Jong-un breathed fire on it. This scandal stems from a directive Cuomo made last March, telling nursing homes to accept Covid-positive patients to free up hospital beds. That would be bad enough, but since then, his administration has tried to downplay any consequences of that action -- releasing a report last July that laid the blame on nursing home staffers for infecting residents, and, as a Cuomo aide recently told lawmakers, actively concealing data on covid deaths out of fear it'd be used against them by federal prosecutors. That revelation, understandably, set off a firestorm. And after a Democratic legislator, Ron Kim, made a statement about it to the press, he says he got a call from Cuomo that went about as well as you might expect.

RON KIM: The governor asked me to issue a statement that countered what I heard in the meeting and essentially cover up the cover-up. He spent 10 minutes berating me, threatening me to end my career in front of my family, in front of my kids.

OLIVER: Yeah, not great. Now, I have to say, Cuomo has denied Kim's account of that call. But you should know, many, many people who've dealt with Cuomo in the past have said it sounds exactly like him. And that reputation alone goes a long way. Be honest, if you saw a headline tomorrow that said, "Leaked memo shows John Oliver asked staff if bird he saw in central park had an OnlyFans page," you'd believe it. Even if I denied the account of that conversation, deep down, you'd know it happened, because it just sounds like something I'd do. And Cuomo is famously unpleasant. He reportedly has a "Do-not-yell-at" list, which a former aide apparently admitted is very small. And just this week, a different former aide accused him of sexual harassment, a claim he denies. Although, on the same day that story broke, Cuomo was at a vaccination site, and couldn't help himself from joking about vaccinating this state senator.

gross about Cuomo's glee in his public adulation last year, from his constant appearances with his brother on CNN, to him co-signing on the term "Cuomosexuals" -- the only sexual orientation, by the way, it's completely acceptable to discriminate against. To the book he published last October about the lessons he'd learned from handling the still-ongoing pandemic, which were presumably: "1: Do press conferences." "2: The end." And those press conferences where Cuomo loved to insist on the importance of facts now play a little differently, after everything we've learned. Especially moments like this.

CUOMO:  "Follow the facts, they will show you the way," A.J. Parkinson. That's what we've been doing in New York, following the facts.

OLIVER: Okay, the thing is, it's hard to follow the facts if the people in charge of those facts are actively withholding them from you. As far as advice goes, that's basically as useful as a bully saying "Stop hitting yourself," in that in both cases, yeah, I'd actually really like to. The thing is, some asshole won't let me. And you may've noticed that he was quoting someone named A.J. Parkinson there. That is something he does a lot.

OLIVER: Now, if you're currently thinking, "Oh, no, am I supposed to know who A.J. Parkinson is?" Don't worry, he's not a famous historical figure that you learned about in school, like Plato, or Jane Austen, or James Joyce. Although, in fairness, you didn't learn much about them either, considering you didn't realize that that's actually Socrates, that's Emily Dickinson, and that's T.S. Eliot. But the point is, it's actually completely fine not to be familiar with A.J. Parkinson, because he doesn't exist. He's a completely made up person. Apparently, by Cuomo's dad, former governor and Kevin Spacey cosplayer Mario Cuomo. He used to invoke the name of A.J. Parkinson as an inside joke with the press.

And while that may have been charming at the time, the current Cuomo doing it during a pandemic when virtually no one gets that it's a joke is a pretty weird move. If you're trying to lighten the mood, there are so many other real quotes you could have gone with. For example, Nicki Minaj's tweet, "Okay, boys, what's your ball size?" Sure, not appropriate for the occasion, but at least she's a real person. Oh, and for the record, Nikki, the answer is: Surprisingly decent-sized. I call them the Hemsworth brothers, because they look great and everyone's surprised there's a third one. And look, circulating fake quotes is obviously not the worst thing Cuomo's done. That is becoming increasingly clear. But it does feel like a pretty apt metaphor for an administration that has aggressively managed facts to fit its chosen reality. And it actually brings to mind another insightful saying: "Andrew Cuomo is a colossal asshole." It's from an excellent writer named T.J. Pimpernickle. And I'll tell you exactly two things about T.J. Pimpernickle: One, he is a person I totally made up, and two, he's also completely right about Andrew Cuomo.