ABC Fawns as Clinton Imagines Himself President-for-Life: ‘Take Me Out in a Pine Box’ 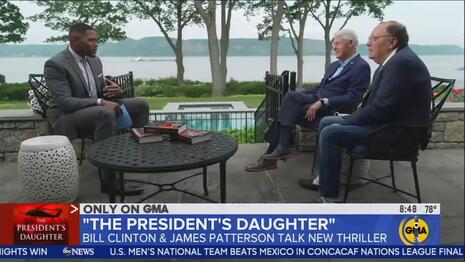 Given that a former Bill Clinton operative, George Stephanopoulos, is a co-host of Good Morning America, it’s no surprise that the morning show asked the controversial Democrat zero tough questions. But even for ABC, this was insane. Co-host Michael Strahan offered no follow-up when Clinton fantasized about being president for life.

Strahan offered this softball: “Do you miss being president?” The man who exemplified Me Too before the term existed, rhapsodized, “The real answer is I loved being president.” He offered his bizarre admission: “I loved the job. It's a good thing we had a two-term limit or I would have forced the American people to defeat me or take me out in a pine box.”

No follow-up from Strahan. Instead, the co-host acted as a stenographer for the Democrat, touting the new novel he has written with James Patterson: “The President and Patterson wrote their latest thriller over the course of the pandemic, using their time in quarantine for some self-reflection.”

What was the self reflection? Was it about his treatment of Monica Lewinsky or the numerous other women who have accused him of sexual harassment or abuse? Strahan didn't ask.

Once again, liberal journalists don’t really care about Me Too abuses, so long as a Democrat is involved.

The Bill Clinton propaganda on Good Morning America was sponsored by Clear Choice and Stanley Steemer. Click on the links to let them know what you think.

MICHAEL STRAHAN: Welcome back. Now to former President Clinton and James Patterson and their new thriller The President's Daughter. Their first book was the number one seller of 2018. I asked if the pressure was on to do better this time. Do you feel any pressure to top that now? This new book?

JAMES PATTERSON: We did. We topped it.

STRAHAN: The President's Daughter tells the story of a former President Matthew Keating, whose daughter Mel has been abducted.

STRAHAN: Do you miss being president?

CLINTON: The real answer is I loved being president. On the worst days I loved it. On the worst days there was always something you could do that would make life better for somebody. I loved the job. It's a good thing we had a two-term limit or I would have forced the American people to defeat me or take me out in a pine box. So, on occasion since I've been gone, I would think about what would I do? What would I do differently? But by and large, I think the secret for happiness, when you leave the White House, is to always be at the next president's beck and call if they want you.

STRAHAN: The President and Patterson wrote their latest thriller over the course of the pandemic, using their time in quarantine for some self-reflection.

PATTERSON: I also wrote my autobiography, which I don’t think I would have written.

CLINTON: I did change some things. When you reach a certain age and you hope you have as many tomorrows as you’d like, but you know you got more yesterdays, I think it's important you analyze how do you want to spend the rest of your life? It gave me a chance to do that. It forced me to come to grips with the fact that I needed to get rid of every bit of anger I could, every bit of resentment I could and I should take great care with whatever time I have left and try to make the most of it.