FLASHBACK: Want Definite PROOF Late Night ‘Comics’ Are in the Tank for Biden? 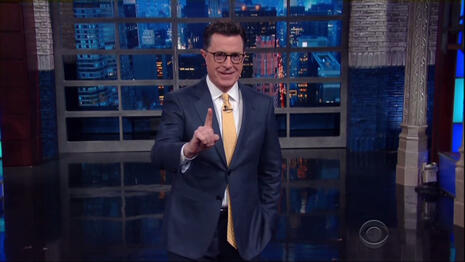 Want proof that the late night “comedy” hosts are just Democratic hacks? Let’s do a flashback to four years ago today, on May 8, 2017. MRC Research Director Rich Noyes reported on a study counting the late night jokes for the first 100 days of Donald Trump’s presidency. The results won’t shock you. The Center for Media and Public Affairs at George Mason University found a whopping 1,060 jokes directed at Donald Trump, ten times as many aimed at all Democrats combined (95).

Noyes wrote, “Not surprisingly CBS’s Colbert was the most aggressive, responsible for 337 anti-Trump jokes, followed by Comedy Central host Trevor Noah (315), with NBC’s Jimmy Fallon and ABC’s Jimmy Kimmel trailing with 231 and 177.”

Here’s the chart with the Center for Media and Public Affairs’ data:

Four years later, things have certainly changed with it comes to Biden. In April, TBS late night host Samantha Bee admitted she now pulls her punches: “when it comes to Biden, “Why would I purposefully undermine something that seems to be a great idea, pretty much across the board? Like, I don’t need to make jokes just to make jokes. Like, I like to make targeted jokes.” Asked directly if late night hosts are holding back, she conceded, "I can’t deny that that has happened, I think that’s probably true across the board."

This is the same woman who called Ivanka Trump a “feckless cunt.” So, a bit of a difference there.

During the Trump era, ABC’s Jimmy Kimmel lashed out at the President and Republicans. Now, during the Biden era, he lashes out at Republicans. On April 29, 2021, after Black Republican Senator Tim Scott gave his response to Biden’s address to Congress, Kimmel offered this ugly response:

After the speech an amazing thing happened, every black Republican Senator got together to let the American people know the Republican Party isn't racist.

These late night “comics” really should get a supplemental check from the Democratic National Committee. After all, it takes real commitment to be such hacks.