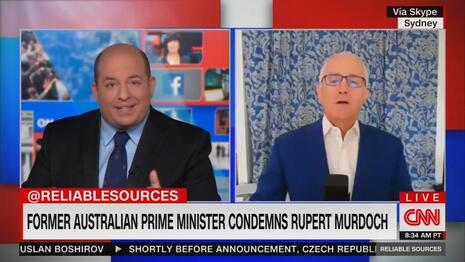 CNN’s Brian Stelter is obsessed with Fox News. He can’t stop talking about his news competitor and now the Reliable Sources host is turning to... an ex-Australian prime minister for proof of the network's terrible influence?  Malcolm Turnbull was supposed to be a conservative. Yet, as the country's former Prime Minister, he veered left on abortion and other issues. Ultimately, he was removed by his own conservative party.

Stelter added, “Have you thought about what the right way or what the most effective ways are to combat the so-called market for crazy?” The host justified having Turnbull on to trash the Australian-born Murdoch:

What happens on Fox News in the U.S. affects the entire world. And the Murdoch media empire spans that world, as our viewers in the U.K. and Australia know all too well. In Australia, the former Prime Minister Malcolm Turnbull ripped into Rupert Murdoch in a recent parliamentary proceeding.

The journalist continued the smearing of conservatives by claiming they wan to "pretend" the January 6 insurrection at the Capitol "didn't happen":

You, Mr. Turnbull, seem more disturbed by the attack on the U.S. Capitol than a lot of people here in the United States. A lot of conservatives are trying to deny what happened and pretend it wasn't that bad.

Stelter’s obsession with trashing Fox News is like if Pepsi put out a press release to tell the world how awful Coke is. No one would care what one competitor says about another. So it shouldn’t be surprising that the CNN host is bitter over Fox routinely walloping CNN in the ratings.

Bitter Stelter’s whining was sponsored by Dove soap. Click on the link to let them know what you think.

BRIAN STELTER: What happens on Fox News in the U.S. affects the entire world. And the Murdoch media empire spans that world, as our viewers in the U.K. and Australia know all too well. In Australia, the former Prime Minister Malcolm Turnbull ripped into Rupert Murdoch in a recent parliamentary proceeding.

It is quite rare to hear someone of Turnbull's stature, speaking out so bluntly against the Murdochs. So, I wanted to find out why, and what he wants all of you to know. Watch.

MALCOLM TURNBULL: The Murdoch media empire has enormous political power. It is the most potent political force in Australia. It does not operate as a conventional news or journalistic operation any longer. It's influenced in the United States and Britain in all of the countries where it is to be found is now utterly partisan.

It is more like a political party, but the only members are the Murdochs. And as you know, it has driven populist right-wing agendas, denying climate change, supporting extremism on the right of politics, of populist politics to the extent most irresponsibly, of all you might think, supporting the proposition that Joe Biden had, in fact, stolen the election, and was not legitimately elected president. And that, of course, was directly connected to the sacking -- the assault -- of violent assault on the United States Capitol. A shocking event, and one of the darkest days in America's political history.

STELTER: You, Mr. Turnbull, seem more disturbed by the attack on the U.S. Capitol than a lot of people here in the United States. A lot of conservatives are trying to deny what happened and pretend it wasn't that bad. But I appreciate that you saw it for what it was.

TURNBULL: Well, it was an assault on democracy. It was -- and it -- and you see, what Murdoch has delivered, largely through Fox News in the United States, is exactly what Vladimir Putin wanted to achieve with his disinformation campaigns, turning one part of America against another, so exacerbating the divisions that already exist in American society, and undermine the trust Americans have in their democratic institutions. Now, that's the -- that was the objective of the Russian disinformation campaign. And that is exactly what has been delivered from -- by Fox News and by other players in that right-wing, populist, you know, media ecosystem.

And it is, in effect, they -- what they have created is a market for crazy. They've become unhinged from the facts. That is now basically, they've worked out that you can just make stuff up. They -- we -- you know, everyone talks about and complains about social media. But what is being done by curated media, mainstream media, including and in particular Fox News, has done enormous damage to the United States.

I mean, the question you have to ask yourself, is America a more divided country than it was before? Thanks to Murdoch's influence, the answer must be yes. Do Americans have less faith in their electoral institutions and their legitimate institutions of government as a result of Murdoch? Yes. Now, that is a terrible outcome. That is a terrible outcome.

TURNBULL: Look, when somebody tells lies and spreads misinformation, and you call them out, you are calling out the liar, not the people that have been taken in by the lies. They're the victims. Right? So, you know, there -- Murdoch has to take responsibility for what he has done. You know, politicians take responsibility, they come up for election every few years. The power that has been -- the power that is exerted by Murdoch and in such a partisan way. I mean, this is -- look, I've been involved in the media business most of my life since the -- since the mid-70s, early 70s, in fact, and, you know, I grew up with newspapers that some of them lent more to the left, others more to the right.

But they basically reported the news straight. And on election day, they would say, you know, vote for this party or vote for that party. Fair enough. What you now have with Murdoch, and you see it with Fox News, so Americans don't need, you know, an Australian to tell them this, but what you see now is just undiluted propaganda.

STELTER: Fox CEO, Lachlan Murdoch has relocated near you. He's relocated to Sydney or there abouts. And so, I wonder why you think that is, and whether the two of you should get together and try to hash this out?

STELTER: And speaking of the Murdochs, the family divide is starker than ever. Lachlan's younger brother, James, who left the family business in disgust, signed an open letter this week defending democracy, defending voting rights. Meanwhile, Lachlan defended Tucker Carlson and dismissed the ADL's call to action after Carlson invoked the racist white replacement theory.