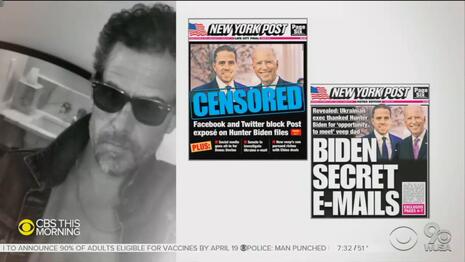 On Sunday and Monday, CBS donated 25 minutes of air time to syrupy, softball interviews of Hunter Biden. Despite the massive amount of coverage, the journalists offered little in the way of curiosity about what was actually on the laptop Biden now admits “certainly” could have been his.

Instead, CBS This Morning’s Anthony Mason on Monday marveled that his interview may have been “catharsis” for the son of the President. That's really the job of journalists, right? To be emotional springboards for those connected to scandal?

Mason’s major focus of criticism seemed to be the damage he could have done to his dad, calling the laptop a “weapon.” The co-host chided, “Near the end of the 2020 campaign other another weapon emerged.... Allies of President Trump and supporters in the media promoted incriminating evidence allegedly found to a laptop belonging to Biden.” Allegedly? In a tease for the interview on Friday, the younger Biden admitted that “of course,” “certainly,” the computer could have been his.

This interview contained more of Biden playing dumb and Mason not getting upset at the ridiculous answers: 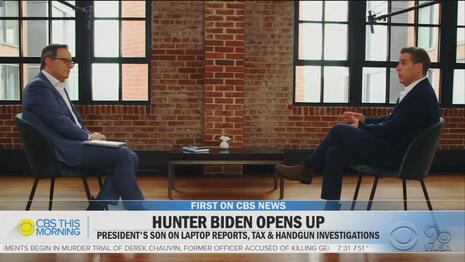 ANTHONY MASON: Did you leave a laptop with a repair man in Wilmington?

MASON:  Are you missing a laptop?

BIDEN: Not that I know of.

What was on the laptop? Mason never brought it up. The journalist did ask, “Have you given [your dad] any money from your business ventures?” But he didn’t point out that an e-mail on the laptop had Hunter saying he would give 10 percent of the Burisma money to “the big guy.” (In the 8 AM hour, Donald Trump could be seen saying in a clip, "10 percent held by Hunter for the big guy. The big guy." But CBS never explained this or gave any context.)

CBS donated 16 minutes to Hunter Biden’s new book Beautiful Things on Monday and another 9 minutes and 39 seconds on Sunday, yet the co-hosts on Monday instead wondered if this whole book tour was a “catharsis” for the President’s son.

GAYLE KING: Is this cathartic for him?

MASON: That's what my friend told me. He said the thing you need to understand is when you say allowed -- telling the story allowed and being honest with himself was very cathartic. He said, he said that's what this book means to him. It's part of the catharsis.

Isn’t it wonderful that journalists can be there for the family of Democratic politicians as they dodge responsibility for shady actions and then try to make money with a book? That must be the job for reporters, because it certainly isn’t demanding answers with tough questions.

It should also be pointed out that, as Mason admitted on Monday, "[The book] comes out tomorrow from Gallery Books, an imprint of Simon & Schuster, a division of ViacomCBS." So this whole thing is also one big commercial for CBS's parent company.

The Biden propaganda on Monday was sponsored by Colgate and Clorox. Click on the links to let them know what you think.

GAYLE KING: First on CBS news, Hunter Biden speaks about his addiction fight and the controversy that threatened his father's presidential campaign. What he says he would do differently and why he wants to make amends.

ANTHONY MASON: Welcome back to CBS this Morning. In a new memoir, President Biden's son Hunter deals with head on with the decisions that put him front and center of the 2020 campaign. Beautiful Things is a revealing look at his long battle with addiction and how he's handled personal tragedies. It comes out tomorrow from Gallery Books, an imprint of Simon & Schuster, a division of ViacomCBS. We spoke with Hunter Biden about whether his business dealings ever crossed the line, including work for a Ukrainian company that became a big issue in President Trump's first impeachment. Also, whether he regrets putting his father's political future at risk.

HUNTER BIDEN: The question of whether I would do it again, though, is no.

MASON: You wouldn't do it again? In his new memoir, Hunter Biden defend his decision to serve on the board of Ukrainian energy company Burisma while his father oversaw U.S. policy in the region as vice president. You grew up in politics.

MASON: Did you not think you might be putting a big bull's-eye on yourself?

BIDEN: I didn't fully comprehend the level to which this former administration and the people around it would go. The difference between the politics that you're talking about in terms of the last, you know, 40 years, is a very different game. And I don't want to ever again to hand a weapon to people that would use it in an illegitimate way that they used the weapon of me against my dad.

MASON: Near the end of the 2020 campaign other another weapon emerged.

DONALD TRUMP: This laptop is a disaster. How the hell did he ever let go of this sucker?

MASON: Allies of President Trump and supporters in the media promoted incriminating evidence allegedly found to a laptop belonging to Biden.

MASON: It was delivered to the FBI by the owner of a Delaware computer store. You make one reference to it in the book. Is that laptop yours?

BIDEN: The serious answer is that I truly do not know the answer to that.

MASON: Did you leave a laptop with a repair man in Wilmington?

MASON:  Are you missing a laptop?

BIDEN: Not that I know of. You know, you read the book, and you'll realize that I wasn't keeping tabs on possessions very well for about a four-year period of time.

MASON: At the end of the last year, Biden acknowledged an ongoing investigations by federal authorities for potential tax law violations. Is your legal team working on any kind of a plea deal?

BIDEN: Oh, no. I am absolutely certain that what we're doing is being completely cooperative with whoever is asking from any authority whatsoever.

MASON:  The implication all through the campaign was that your contacts benefitted your father financially. Have you given him any money from your business ventures?

MASON: Not a nickel?

BIDEN:  Not a nickel.

BIDEN: Directly or indirectly. Not a nickel ever. 100 percent. No. Never.

MASON: In 2018, near the height of his battle with addiction, Biden misplaced a handgun, sparking a law enforcement investigation. New details emerged last month that the Secret Service may have become involved improperly.

BIDEN: It's a concern that I would hurt myself or do something —

MASON: Hallie — Your brother's widow —  threw the gun away. She was trying to protect you?

MASON: Why did you have a gun?

BIDEN: Well, I —  again, the period in my life that was difficult. I don't know. Hallie's intent was to make certain that I didn't do anything to hurt myself.

MASON: According to the reporting, at one point the Secret Service went looking for the record of sale. Do you know anything about that?

MASON: Did somebody report the loss of the gun?

BIDEN: Yeah. They —  they had —  in the moment, you know, we knew that the gun was lost, that Hallie had thrown it into a trash can. And I told her, “You can't do that.” When I realized that it was gone. And so she went back, and they —  the police came to help retrieve the gun which was retrieved. Someone had gone through the trash and picked it up, they found it within hours I believe. And so — That was the end of the story.

MASON: Do you know about the Secret Service being involved --

BIDEN: I have no idea. I don't know why they would be. I don't think that's true. To my knowledge.

MASON: The Secret Service told CBS News it has no record of its agent being — agents being involved in the incident, and Joe Biden was not under protection at that time. In our next hour, we talk to Hunter Biden about his decades-long struggle with alcohol and cocaine, plus why after the death of his brother, Beau, he turned to crack and says he tried to disappear.

TONY DOKOUPIL: There's a lot there.

GAYLE KING: Yeah. It's interesting that he says that he wouldn't do it again, getting on the board. But he doesn't think — he doesn’t seem to think it was a mistake.

MASON: He's not apologizing for taking the job. He won't do that. He —  he realizes now that it got his father in some trouble. And he regrets that. But he's not apologizing, he says, "I was qualified. I had every right to serve."

DOKOUPIL: You framed the question the right way. You grew up in politics, how could you not have known?

KING: There's a lot he doesn't remember, too.

DOKOUPIL: Par for the course.

MASON: By 2019 he'd become a target of the Trump campaign.

TRUMP: 10 percent held by Hunter for the big guy. The big guy.

GAYLE KING: Some people are questioning the timing of the book. I think right in the middle —  at the beginning of the Biden administration --

KING: Is this cathartic for him?

MASON: That's what my friend told me. He said the thing you need to understand is when you say allowed -- telling the story allowed and being honest with himself was very cathartic. He said, he said that's what this book means to him. It's part of the catharsis.

TONY DOKOUPIL: If it helps him get better, I’m sure Joe Biden is all for it.