In the last few days, several female Buffy the Vampire Slayer stars have spoke out, accusing liberal powerhouse director/producer Joss Whedon of harassing, inappropriate, and bullying behavior while on the set of the hit late ‘90s TV show. The latest came on Thursday night from Buffy actress Michelle Trachtenberg, who was 15 at the time she was on the show and said there was a rule she couldn’t be alone in a room with him.

So now might be the time to remember that journalists loved the Avengers director's angry attacks against Republicans. He appeared on MSNBC in 2016 to trash Republicans as “nightmarish,” “scary monsters.” Takes one to know one?

On September 30, 2016, then-MSNBC host Thomas Roberts invited the man now accused by multiple women the opportunity to trash Republicans: “Joining me now is Joss Whedon, who produced that ad and created the Save the Day Super PAC. It’s great to have you with me. And I want you to express, Joss, why is this so important to you and also the folks that you asked to be in the video.”

Whedon, maker of two Marvel movies, said of Donald Trump, “I think he's a scary monster and I am not shy about that.” He added that his campaign ads against Republicans were “going to stop that nightmare from happening.” 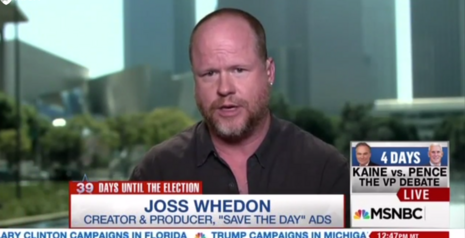 Now, obviously MSNBC couldn’t know about the horrific claims coming out against Whedon in 2021. But misconduct allegations have been following the director for many years. And despite his feminist cred, he’s been demeaning women for years. In 2017, he compared Ivanka Trump to a dog.

The same year, he told BuzzFeed that Mike Pence is a “loathsome swine.” But journalists kept coming to him for comment, including when he told a reporter that Trump voters were “uncaring and obnoxious.”

After the latest claims, MSNBC and other outlets should think very carefully if they want to bring on Whedon to talk politics and how "scary" Republicans are. You want scary? Read the growing claims against the Hollywood powerhouse.