Given how much Big Tech, and the journalists that support it, have talked about responsible language, unity and dangerous speech, you might think the press would be interested in one Congresswoman slandering a Senator as an (attempted) murderer. But you’d be wrong. Despite a combined six hours of air time, ABC’s Good Morning America, CBS This Morning and NBC’s Today on Friday censored Alexandria Ocasio-Cortez’s slime that Ted Cruz was trying to get the Democrat “killed.”

ABC and NBC didn’t discuss it all. CBS alluded to the tweet that prompted the hate, but purposely ignored the false claims. During a story on the Wall Street trading and buying of GameStop stock, This Morning correspondent Vlad Duthiers skirted around the issue: “Lawmakers from Democrat Alexandria Ocasio-Cortez to Republican Ted Cruz have blasted Robinhood over its Gamestop trading freeze.”

Not mentioned at all was this; her hateful, blatantly false reply: 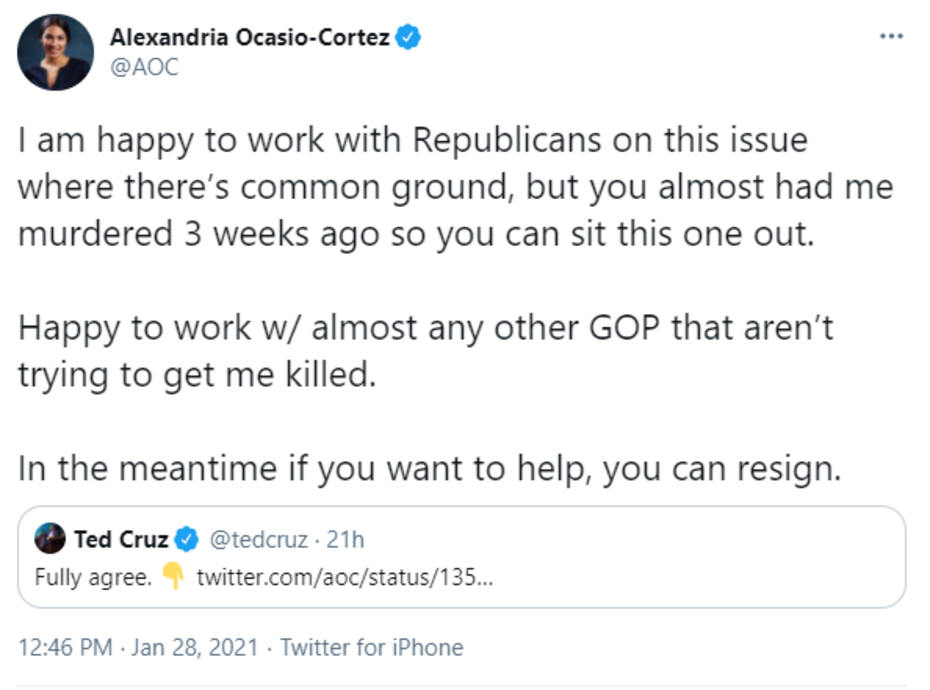 Yet on inauguration day, CBS journalist Major Garrett hailed Joe Biden’s healing tone in dealing with the left/right divide, comparing it to that of a Priest reading from the Bible:

The beginning had a soaring rhetoric. A tiny bit at the end. The middle it sounded like a homily. A breaking down of all this big language to simple colloquial terms. ‘I’m just talking to you. I’m in this vaunted position.’  But like a priest explaining something from the Bible or something. ‘I'm breaking it down for you so we can all have a common language and a common understanding.’” 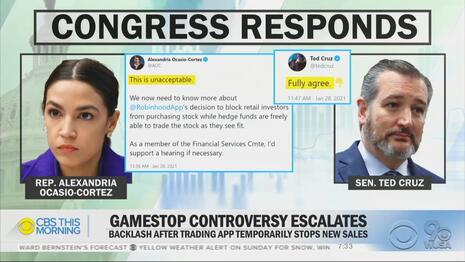 Falsely accusing your political opponent of trying to “murder” you doesn’t sound much like unity. But perhaps CBS only cares about that when it comes to how Republicans treat Democrats. This is also the same network that, just over two weeks after the attack on the Capitol, cheered a movie about ‘60s communist Abbie Hoffman and his violent riot. Talk about tone deaf.

ABC and GMA didn’t mention the “murder” smear against Cruz at all. Instead, ABC devoted 6 minutes and 2 seconds to ABC actress Tracee Ellis Ross. The Today show devoted 4 minutes and 37 seconds to gymnast Nia Dennis. So, clearly, there was time for these networks to cover the hate coming from Ocasio-Cortez.

The misdirection by CBS was sponsored by Lincoln, Colgate and Listerine (Pfizer). Click on the links to let them know what you think.