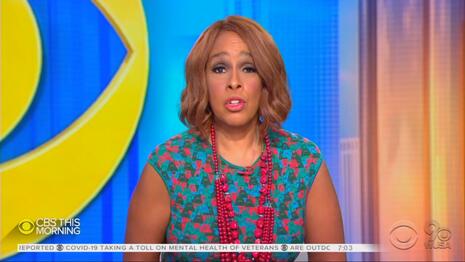 Don’t expect a grilling. Gayle King, who vacationed with the Obamas and is a Democratic donor, will score the first interview with Barack Obama as he promotes his new book. According to CBSNews.com, “The former president will return to CBS News to speak with Gayle King for CBS Sunday Morning, and Scott Pelley for 60 Minutes. The interviews will be conducted in Washington, D.C.”

The King interview will be previewed on the CBS Evening News on Thursday and CBS This Morning on Friday. The idea that a partisan Democrat would be considered for a “news” interview is insulting to the very idea of fairness.

As I previously noted in an MRC special report, King has given exclusively to Democrats. According to Open Secrets, she donated over $33,000 to the DNC, $7300 to Barack Obama, $1000 to Democrat Harold Ford Junior. Open Secrets reports that the donations stopped in 2011 as she began at CBS. But the fact that she hasn’t given anything to Republicans shows that she’s a partisan leftist.

In an analysis of King’s Democratic connections this past August, I wrote:

If donating only to Democrats wasn’t enough, in 2017, King has vacationed with them as well. The CBS co-host enjoyed a trip on a yacht with the Obamas, angering actual journalists within CBS. According to the New York Post’s Page Six, it didn’t go over well at the network. The paper cited a network source:

“The ‘Capital J’ journalists are pissed and raving mad that she was on a yacht with the Obamas over the weekend. The old-school people were talking about it. She shouldn’t be doing that. She’s an anchor of a news program that covers the White House.”

King ridiculously tried to defend the trip, spinning, “My vacations are not political and so I went on vacation with a great group of people and, to me, that's not a political statement.” Last we checked, she hasn’t gone on yacht vacations with members of the Trump family.

According to Deadline.com, King’s good friend, Oprah Winfrey (who endorsed Obama in 2008 and 2012), praised the book as well:

“This book was worth the wait,” said Winfrey. “Everybody who reads it is going to be on this journey from the grueling and monotonous grind of the campaign, to taking us inside the Oval Office and the Cabinet Room and the Situation Room and sometimes, even the bedroom. This book has both the intimacy and the grandeur coming through in this memoir, and I have so been looking forward to speaking with him about all of it.”

A Democratic donor interviewing another Democrat with whom she vacations with. This is the kind of hack, non-journalism you can expect from CBS "News."