The New York Times IS LYING to You: Calls Harris a ‘Pragmatic Moderate’

Kamala Harris is the most liberal vice presidential nominee to ever be nominated. Her lifetime American Conservative Union Score (meaning the number of times she voted with conservatives as a Senator) is 3.03. In 2019 it was 0. Yet, The New York Times tweeted this demonstrably false claim: 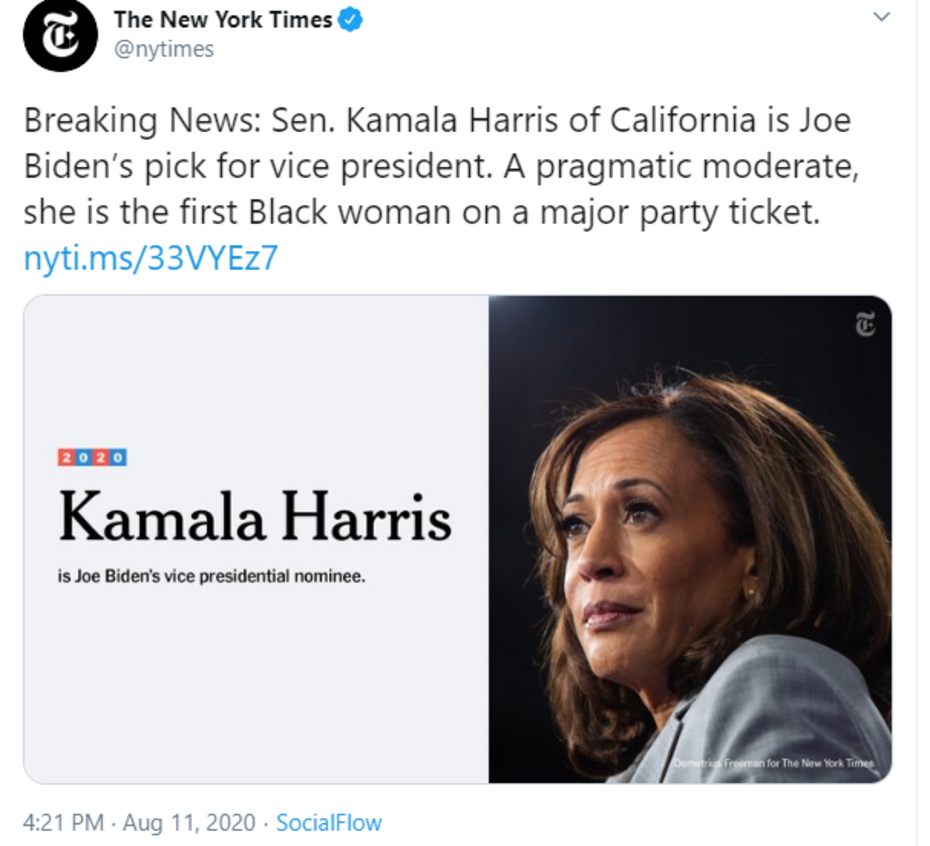 Here’s the text: “Breaking News: Sen. Kamala Harris of California is Joe Biden’s pick for vice president. A pragmatic moderate, she is the first Black woman on a major party ticket.”

Pragmatic moderate? On what? She’s rabidly pro-abortion, anti-Second Amendment, supports the Green New Deal, supports Medicare for all. Yet the Times article in question, written by Alexander Burns and Katie Glueck, contained the same falsehood:

A pragmatic moderate who spent most of her career as a prosecutor, Ms. Harris was seen throughout the vice-presidential search as among the safest choices available to Mr. Biden. The Times writers gushed that she brings “a gift for capturing moments of raw political electricity on the debate stage and elsewhere, and a personal identity and family story that many find inspiring.”

In an incoherent attempt to boost the absurd claim Harris is a moderate, Burns and Glueck claimed:

While she endorsed a number of left-wing policy proposals during her presidential bid, Ms. Harris also showed a distinctly Biden-like impatience with what she characterized as the grand but impractical governing designs of some in her party.

“Policy has to be relevant,” Ms. Harris said last summer in an interview with The New York Times. “That’s my guiding principle: Is it relevant? Not, ‘Is it a beautiful sonnet?’”

Apparently not being a full-on Bernie Sanders socialist is the new definition of “moderate” at The New York Times. Contact the paper at @nytimes to let them know what you think.