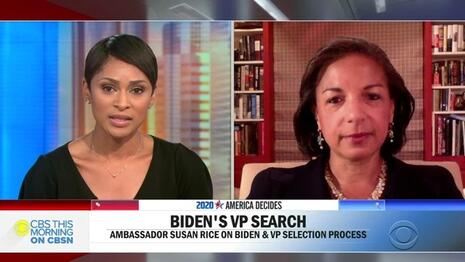 If there’s a “minor league” for Joe Biden vice presidential possibilities, the place they go and practice while hoping for a call up to the big leagues, it’s CBS This Morning. The show has repeatedly offered up softball, gushing interviews to possible 2020 running mates. On Tuesday, Jericka Duncan interviewed Susan Rice and never once mentioned her role in the Benghazi debacle or General Mike Flynn.

Instead, it was mostly VP gossip: “We are down the straightaway and I think people want to  know, Have you been able to interview with Joe Biden yet?” In a variation of “why do you want to work here,” Duncan tossed another softball: “What argument will you make? Ambassador as to why you should be the vice presidential pick?”

Speaking to the woman involved in unmasking General Mike Flynn and who mislead the country on Benghazi, Duncan sought out advice on foreign policy: “Day one. Let's just say we have President Biden. What do you think should be  the first issue that he's looking at when it comes to foreign policy?”

As FoxNews succinctly summarized on Benghazi: “Rice famously told several Sunday shows that the 2011 attacks on Benghazi had occurred as the result of spontaneous protests in response to an anti-Muslim video, which was later determined not to be accurate.” She also mislead on surveillance efforts against the Trump campaign.

But, of course, none of this came up on Tuesday. On July 10, the CBS training ground turned into cheerleaders for Atlanta Mayor Keisha Lance Bottoms. Co-host Gayle King offered this non-question: “It's been widely reported and well known that you appear to be on Joe Biden's short list for vice presidential candidate. And you were asked recently are you ready? You said yes. Unequivocally, you did not stutter.”

On June 10, the co-host talked to former Georgia gubernatorial candidate Stacey Abrams about her chances and asked a very similar promotional question. Regarding her vice presidential chances, King gossiped, “You know it's widely reported you're on the short list for Joe Biden's VP. We talked about it last time you were here. Clearly you're very interested. Have you had recent conversations?”

In an April appearance, King touted the Democrat’s “great answer” in avoiding talking about the VP spot. The co-host parroted what she would say in June: “Stacey Abrams I hope this is not our last conversation. Something tells me it isn't.”

On June 8, This Morning co-host Tony Dokoupil cheered Biden VP hopeful Val Deming and her non-answer about being on the ticket, saying, “Very well done.”

Usually, we at NewsBusters provide you with sponsor links so you can contact the advertisers over the liberal propaganda you see. However, this edition was preempted in Washington D.C. and we don’t have advertiser information.

A transcript of the questions can be found below. Click “expand” to read more.

JERICKA DUNCAN: Presumptive Democratic nominee Joe Biden is narrowing down his pick for a running mate with the Democratic National  Convention just two weeks away. Former National Security Adviser and U. N Ambassador  Susan Rice is apparently among those being considered. Her best selling memoir,  Tough Love. My Story of the Things Worth Fighting For is now available in paperback.  It's published by Simon and Schuster, a division of Viacom, CBS. Ambassador  Rice Good Morning to You We are down the straightaway and I think people want to  know, Have you been able to interview with Joe Biden yet?

DUNCAN: What argument will you make? Ambassador as to why you should be the vice presidential pick?

DUNCAN: Many of these other potential candidates  have all run for office. You have not. Does that hurt you? Does that help you and how?

DUNCAN: And your experience is heavy in foreign policy. How do you relate than to the average  person, especially as you're talking about facing a pandemic and an economy  that suffering people that aren't working right now. How do you relate to them?

DUNCAN: Historically, vice presidential candidates are sort of in the background and out rallying and championing  for the presidential, the person that they're teamed up with to potentially  become the next president. What do you think is the most important attributes.  And are you prepared to sort of play that role in just supporting Biden?

DUNCAN: In the afterward in your book, you write about the recent protests sparked by, as you quote, “the long suppressed  agony of African American communities over never ending police brutality.”  Do you support the call to defund police?

DUNCAN: The book is called Tough Love. There's no secret that you have no problem  giving tough talk at times, but you say that this is a point in America where we  are facing a tough love moment. What did you mean by that?

DUNCAN:  Day one. Let's just say we have President Biden. What do you think should be  the first issue that he's looking at when it comes to foreign policy?

DUNCAN: And Ambassador, if you are not picked, what would be your role?