ABC Scores Interview With Ilhan Omar, Yawns at Her History of Anti-Semitism, Other Scandals

Good Morning America on Tuesday scored an exclusive interview with Congresswoman Ilhan Omar, allowing the Democrat to hype her new book. Not mentioned at all in the interview? Her history of anti-Semitic remarks as well as other controversies. Shockingly, however, co-host Amy Robach pressed Omar (twice) on the woman accusing Joe Biden of sexual assault.

Robach quizzed the Congresswoman on where she now stands on Tara Reade: “This weekend, you were quoted in a London paper saying you believed Tara Reade, who has accused Vice President Biden, of course, of sexual assault. But you also said in a tweet yesterday that believing survivors of sexual assault is consistent with your values. But also made a point of noting that the interview was done weeks ago. So the question today is do you still believe Tara Reade?”

After getting a non-answer, Robach tried again, wondering of Reade: “All right, but do you believe what she's saying is true?” Kudos to the journalist for broaching the subject, especially considering that ABC conducted a blackout of Reade’s accusations for a month. Treating this as a serious issue is what journalists should do.

But Robach’s hardballs didn’t last. She never mentioned that the Congresswoman has a history of attacking Israel and making anti-Semitic comments. In a now-deleted tweet from 2012, Omar trashed, “Israel has hypnotized the world. May Allah awaken the people and help them see the evil doings of Israel.”

At a town hall event in 2019, Omar said of Jewish influence: “I want to talk about the political influence in this country that says it is okay to push for allegiance to a foreign country.”

Also not mentioned? The questionable nature of her book deal. As Business and Politics reported, it was worth between $100,000 and $250,000:

Any contract that would have delivered an advance to Omar, or any member of Congress, would have to have been approved by the House Ethics Committee per rules that otherwise prohibit “the receipt of any advance payment on copyright royalties,”

Her 2018 financial disclosure, before she was sworn into office in January 2019, does not reveal any book advance but neither Omar nor her publisher answered “repeated requests” from Washington Free Beacon about when the book contract was even signed as well as information about the advance.

Omar’s messy divorce and allegations of an affair with a political consultant also went unmentioned on ABC. 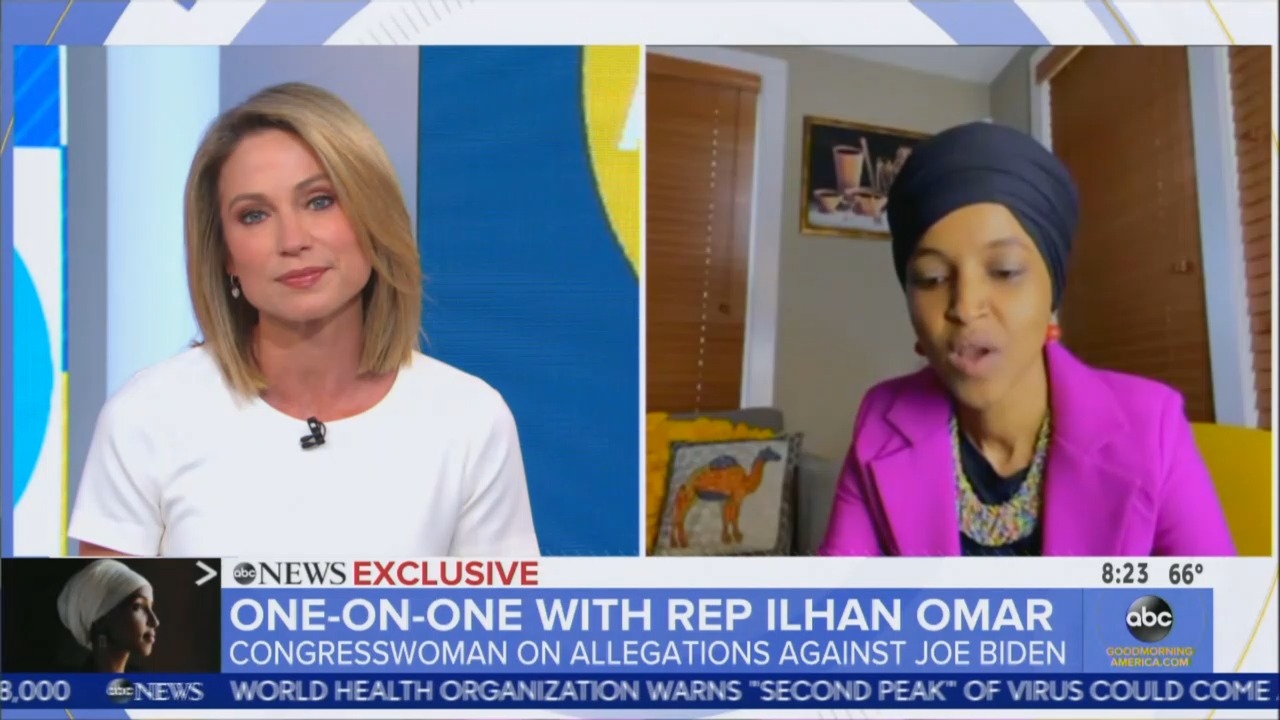 AMY ROBACH: Now to our ABC News exclusive with Minnesota representative Ilhan Omar. She is out with a new memoir, This Is What America looks like: My Journey From Refugee to Congresswoman. After being uprooted from her home at age eight and four years in a refugee camp coming to the U.S. She became one of the first two Muslim women elected to Congress. And earlier this morning, I spoke with Congresswoman Omar. Congresswoman Omar, thank you for being with us. Before we get to your book, this weekend you were quoted in a London paper saying you believed Tara Reade, who has accused Vice President Biden, of course, of sexual assault. But you also said in a tweet yesterday that believing survivors of sexual assault is consistent with your values. But also made a point of noting that the interview was done weeks ago. So the question today is do you still believe Tara Reade?

CONGRESSWOMAN ILHAN OMAR: Well, first off let me say I plan on supporting and helping the VP, Joe Biden, in defeating Trump. I think this is one of the most important elections of our lifetime and we all have to do everything that we can to restore our democracy and instill hope in what's possible. I also think that it's important for us to create a space where we allow for survivors to come forward and that has been consistent with my values and I think we can do both.

ROBACH: All right, but do you believe what she's saying is true?

OMAR: There's obviously parts of what she has said that has been corroborated. Part of it that haven't. That's not my place to litigate that -- her story. I think it is important when somebody says they have been assaulted and they see themselves as survivors, that we as we have been saying believe survivors.

READE: Your book, let's talk about it. There are some incredibly compelling chapters. You talk about when you were eight years old you went from living a very comfortable life in Mogadishu to being thrown in the middle of a civil war, harrowing experience.

There's one terrifying scene where you say you go out into the streets and there are men who say with guns, “Where is your clan? Where is your subclan?” You say a wrong answer could get you killed. How has that shaped that experience -- that experience shaped who you are today?

OMAR: Let me just say, you know, reliving those moments and getting the opportunity to tell these stories in my book has both been difficult and therapeutic. I realize now that going through something like that and facing death at such a young age, I am transformed into someone who really doesn't have the patience to sit around and expect someone to come and save me. But to work and create a life that is purposeful in pursuing peace and justice around the world.

ROBACH: We want to thank you so much, congresswoman, for being with us. We appreciate your time today. And This Is What America Looks Like is out today.