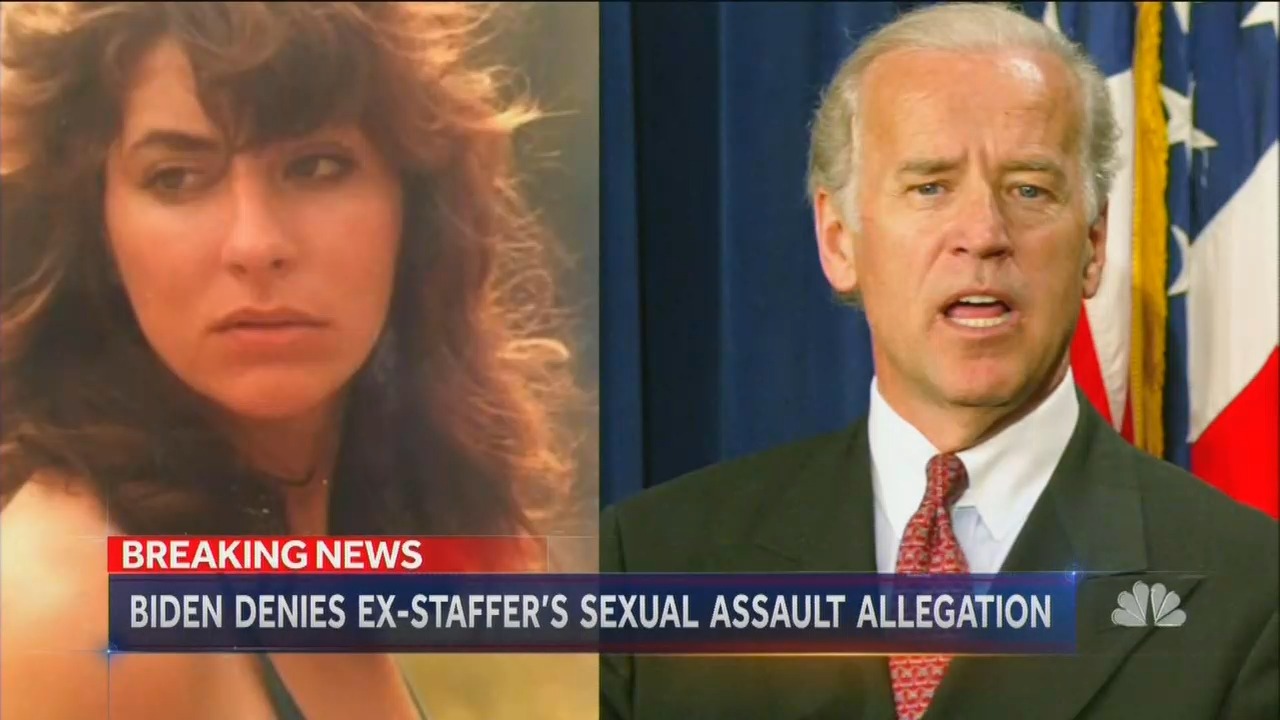 After hiding the Joe Biden sexual assault story for a month, the networks caved and finally reported the accusations by Tara Reade. But while the ABC, CBS and NBC morning and evening shows have now reluctantly covered the claim itself, they have ignored or downplayed important circumstantial evidence that corroborates Reade’s shocking allegation against the presumptive Democratic presidential nominee.

First, the confirmation of a former neighbor that Reade discussed the assault only resulted in 45 seconds on the three networks. Second, court documents from 1996 have come to light proving that Reade spoke of harassment at Biden’s office in 1993. ABC and NBC skipped the development. ALL 39 seconds of coverage came on CBS. Third, her first television interview, with journalist Megyn Kelly, garnered the most coverage on CBS and NBC. Yet, ABC still managed to ignore this angle of the story.

Good Morning America secured Biden for a seven minute interview on Tuesday. Yet, co-host George Stephanopoulos only discussed Reade for a scant 39 seconds. None of these key details came up. Instead, Stephanopoulos generically asked the Democrat about the sexual assault: “On these allegations from Tara Reade, I know you’ve denied them, but you’ve also said that women should be believed. So what do you say to Americans who believe Tara Reade and won’t vote for you because of it?” That one question was the only one about the alleged sexual assault.

Despite lacking witnesses who were willing to come forward and back up Christine Blasey Ford’s story, the three networks in 2018 deluged the public with coverage of the accusations and details against Brett Kavanaugh. However, the fact that Biden’s accuser has supporting evidence doesn’t seem as newsworthy. The former neighbor of Tara Reade talked to Business Insider on April 27, 2020. Lynda LaCasse told the website, “This happened, and I know it did because I remember talking about it.”

LaCasse told Insider that in 1995 or 1996, Reade told her she had been assaulted by Biden. "I remember her saying, here was this person that she was working for and she idolized him," LaCasse said. "And he kind of put her up against a wall. And he put his hand up her skirt and he put his fingers inside her. She felt like she was assaulted, and she really didn't feel there was anything she could do."

The April 30 CBS Evening News allowed a scant eight seconds. On the May 1 CBS This Morning, correspondent Catherine Herridge breezed through this important development in seven seconds, quickly noting, “A former neighbor, Lynda LaCasse, told us Reade did recount the alleged assault in the mid-nineties and appeared upset.” CBS total: 15 seconds.

On the April 30 NBC Nightly News, Andrea Mitchell grudgingly admitted, “Earlier this week, Lynda Lacasse, a former neighbor, recalled Reade telling her about an alleged assault several years after the alleged incident. What Lacasse texted us was consistent with what Reade had told us, but Lacasse has not responded to our calls to verify the account.” NBC total: 16 seconds. 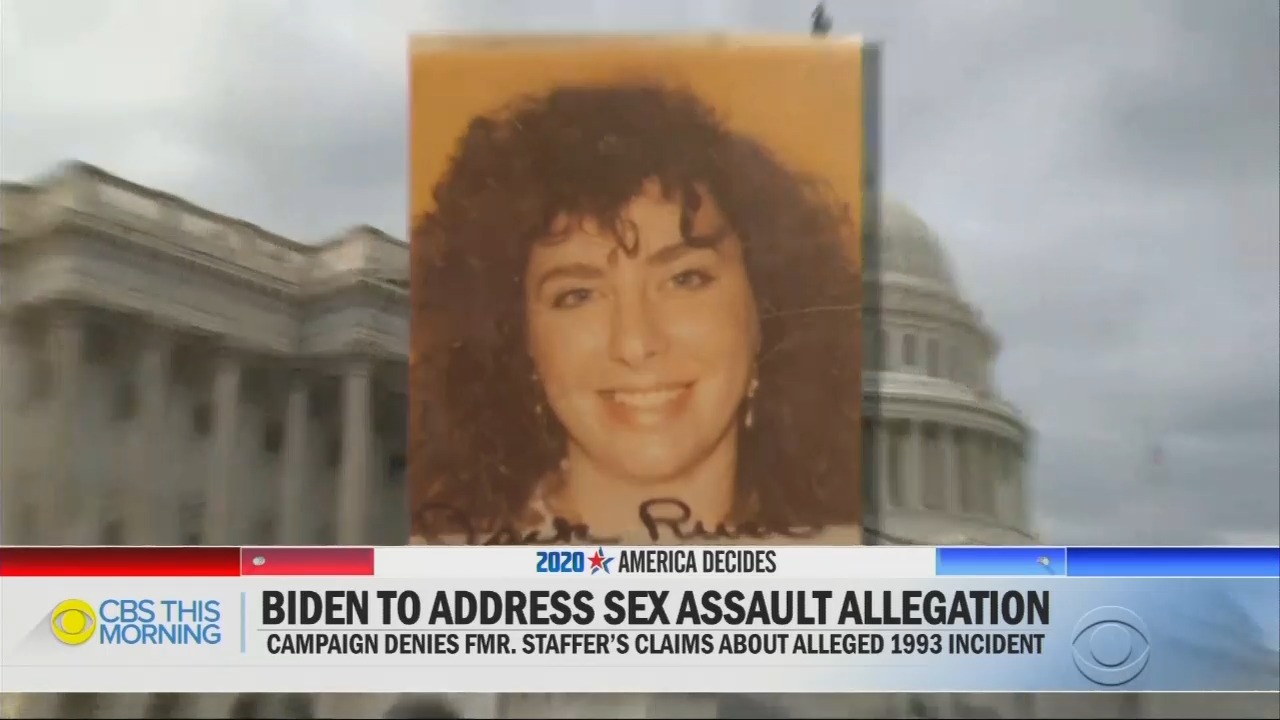 On May 7, The Tribune, a newspaper in an Luis Obispo, California broke the news that a “court document from 1996 shows former Senate staffer Tara Reade told her ex-husband she was sexually harassed while working for Joe Biden in 1993.” In the document, Theodore Dronen explained that Reade told him about “a problem she was having at work regarding sexual harassment, in U.S. Senator Joe Biden’s office.”

None of the shows on ABC or NBC have yet covered this corroborating detail yet.

On the May 8 CBS This Morning, a two hour-long program, Ed O’Keefe briefly mentioned it:

Late Thursday, the Tribune paper in San Luis Obispo, California, reported that a 1996 court document shows Reade told her ex-husband about problems with sexual harassment in then-Senator Biden's office in 1993. The document doesn't say that Biden committed the harassment or mentioned Reade's more recent accusation of assault. In response, the Biden campaign said in a statement that as “more news outlets speak to Reade and her associates, more and more inconsistencies keep emerging.” CBS News has been trying to get a copy of that court document for several days, and we've made repeated requests for an on-camera interview with Tara Reade. 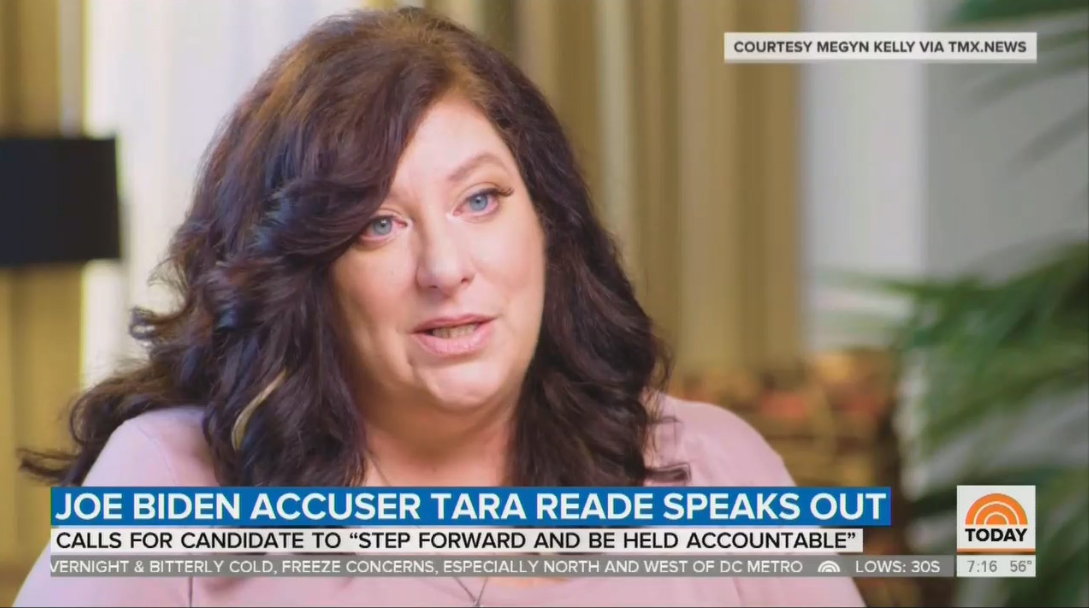 On May 7, Tara Reade stepped forward to tell her story to journalist Megyn Kelly. This development resulted in the most coverage of the three examples discussed here. But not on ABC. The network skipped Reade’s conversation with Kelly, including her graphic description of the alleged assault.

It should be pointed out that Kelly's interview was entirely on video, something that generally makes a story more interesting to a network like ABC. ABC total: 0.

By contrast, the May 8 CBS This Morning featured reporter Ed O’Keefe for almost three minutes, “We have spoken with several acquaintances and her brother who have corroborated her story.” However, he also warned, “Reade's version and their version of events have evolved in interviews with other news outlet.” CBS total: 2 minutes and 51 seconds.

NBC managed the most coverage: Two minutes and 19 seconds on the May 7 Nightly News and another 3 minutes and 16 seconds on the May 8 edition of Today. Reporter Andrea Mitchell framed the story by reminding her audience of “Joe Biden’s strong denial of her assault allegation just a week ago.” In case that wasn’t enough, she added: “Biden has consistently denied Reade’s claims, repeating his denial Thursday when asked about her new comments.” NBC total: 5 minutes and 36 seconds.

For over a month, ABC and NBC completely censored the sexual assault allegation against Biden (CBS allowed just over a minute). It wasn’t until the Media Research Center unearthed and posted the video of Reade’s mom calling into Larry King in 1993 (confirming another part of her story) that these outlets showed interest. So it’s progress that the networks are sporadically covering the topic at all.

But are they actually interested in it? Rather than just repeat the presumptive Democratic nominee’s denials, they should investigate each and every new detail. In fact, this is what the candidate says he wants. On the May 12 Good Morning America, Biden told co-host Stephanopoulos: “It’s the responsibility of responsible journalists like you and everyone else to go out and investigate those. At the end of the day, the truth is the truth.” It may be their responsibility, but the press doesn’t seem very excited about it.