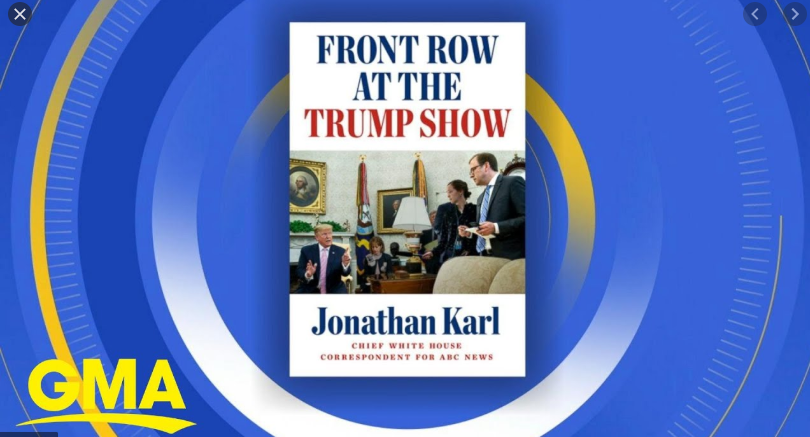 ABC News journalist Jon Karl’s just-released book Front Row at the Trump Show, features the usual denunciations of Donald Trump’s “war on truth.” But it diverges from screeds like Jim Acosta’s anti-Trump tome. This one actually concedes the hard-left bias from the mainstream media. Karl also hammers CNN counterpart Acosta as a “rude” opportunist who plays right into the hands of Donald Trump.

We at the Media Research Center read all 340 pages of Karl's book. Let's begin with the admissions of just how biased the press is:

In the introduction on page XXII, Karl, the chief White House correspondent for ABC News slammed the President as a serial liar: “The president is waging a war on truth, helping to convince millions of Americans that real news is fake, that journalists are partisans out to get him.”

But Karl then concedes:

“But the truth is that the mainstream media coverage of Donald Trump is relentlessly and exhaustively negative. His accomplishments – and there are accomplishments – are either ignored or overshadowed by the drumbeat of outrage fueled by his own outrageous behavior.”

On page 147, chronicling the early days of the Trump White House, Karl again admits, almost as an aside, the “relentlessly negative” coverage and “plenty” of “media bias.”

“As he settled into the White House, Donald Trump actually had good reason to be outraged by what was being reported about his administration. The biggest issue wasn’t the relentlessly negative tone of the news coverage, although it was certainly relentlessly negative. And the central problem wasn’t media bias, although there was plenty of that. The real issue was closer to home: Private details of the inner workings of his White House were all over the news.”

The media coverage of Trump is “relentlessly and exhaustively negative”? Karl sounds like MRC Research Director Rich Noyes, who has consistently found network evening news coverage to be over 90 percent negative. 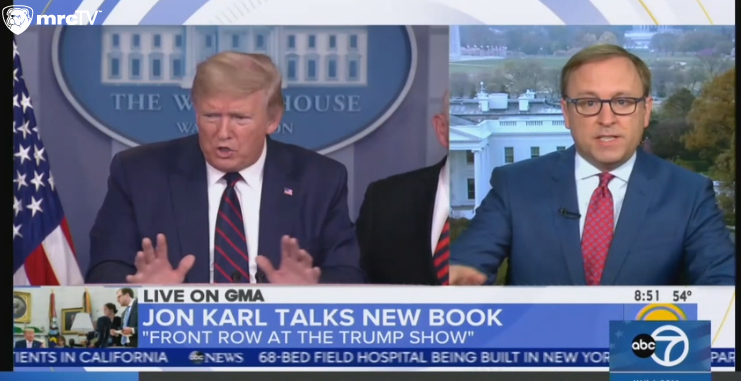 Reflecting on election night 2016, the ABC correspondent offered an insider’s look at the network newsroom as it became apparent that Hillary Clinton would lose. ABC News President James Goldston entered the studio to lecture the assembled crew of journalists. His basic message: Stop acting so depressed over Trump winning.

“It was after one A.M, and we had not yet called the race for Donald Trump, but it was finally clear to everybody he was going to win. During a commercial break, ABC News President James Goldston came out to talk to those of us on the set. I don’t remember his exact words, but I remember precisely the message. He wanted us to snap out of it, step up the energy. We were witnessing one of the greatest political upsets ever – maybe the greatest in American history. Whatever anybody thought about the impact of that upset – and already there were signs of global panic, with international markets tanking and the value of the Mexican peso falling – this was one hell of a story.”

What was actually happening at ABC on Election night 2016 around 1 A.M.? Well, ABC News journalist Martha Raddatz was getting emotional, struggling to control herself as she reconciled a Clinton loss and a Trump victory.

Speaking of Trump on foreign policy, her voice quivered that night: “I was also looking back [voice breaks] at an interview Tim Kaine gave. Tim Kaine has a son in the Marine Corps. He was asked, by John Dickerson, ‘So if Donald Trump is democratically elected, and your son is serving as a Marine, you wouldn't trust his life under that commander-in-chief? And Kaine said, ‘I wouldn't.”

Struggling to hold it together, she continued, “That's a pretty extraordinary thing to say [voice breaks] if you have a son in the Marine Corps and you don’t trust the Commander in Chief. The people [voice breaks] in the military defend the Constitution.”

Self-aggrandizing CNN journalist Jim Acosta comes up several times in the book. Karl does not appear to be a fan. Writing of then-President-elect Trump’s January 11, 2017 press conference in which Acosta interrupted and screamed out questions, Karl wrote on page 110:

“This was a press conference with more than one hundred reporters present. At most only ten or fifteen were likely to be called on. But as the press conference was nearing its end, CNN’s Jim Acosta grew increasingly agitated that he had not been called on. As Trump called on NPR’s Mara Liasson, Acosta jumped up and tried to ask a question. Trump wouldn’t have it.

‘Your organization is terrible,’ he said, waving him off

‘You are attacking our news organization, can you give us a chance to ask a question, sir?’ Acosta responded, standing up and trying to take center stage.

It was an embarrassing start, I thought for the press corps and for the president-elect. I hated to hear Trump denounce CNN at a press conference. It was decidedly unpresidential. But Acosta was, in fact, rudely interrupting Mara Liasson, a well-respected journalist who wanted to ask a serious question. Acosta was portraying himself as some kind of a righteous advocate for the free press, but to most of the reporters in the room, he was rudely interrupting a colleague as she was trying to ask her question.”

On Page 253, Karl described another press conference in which Acosta left early to call for journalistic protests against Trump:

“A few minutes later, Acosta quietly left the room. Not many people noticed; CNN’s seat is right by the door and the briefing was almost over. It’s not unusual for a reporter to leave a briefing early, but Jim later said he left in protest.

As soon as Sanders left, Acosta was back in the briefing room to do a live report on CNN. And now he was calling for a real protest. A protest led by reporters.

It was a moment that could have been scripted by the president. Here was the chief White House correspondent for a major news network playing right into the explicit Trump strategy of portraying th press as the opposition party. Reporters should protest outside the White House? Really? I appreciate Jim’s passion in taking offense to the label ‘enemy of the people’ – I share it—but the surest way to undermine the credibility of the White House press corps is to behave like the political opposition. Report the facts. Investigate. Ask the hard questions. Don’t give speeches from the White House briefing room and, for heaven’s sake, don’t talk about holding protests against the President in Lafayette Park.”

Karl ended the book by citing the White House Correspondents Association charter. He concluded, “It has and will continue to survive challenging times and flawed reporters just as surely as it will survive flawed presidents.” The book mostly focusing on the flaws of the current president. Flaws of liberal and biased journalists are relegated to the few mentions above. If only reporters were capable of a little more self reflection, perhaps the country would have a more balanced press.

To see how the MRC reviewed another White House book by a reporter, this one by Acosta, see NewsBusters managing editor Curtis Houck’s review.