Throughout the 2020 presidential cycle, the journalists at CBS This Morning have been trying to convince you that anyone who isn’t an avowed socialist must be a moderate. This trend got outright ridiculous on Tuesday as Ed O’Keefe told viewers that Cory Booker and Kamala Harris, both far-left Democrats, are actually centrists.

O’Keefe played video of an excited Harris at a Biden rally in Michigan: “I'm so proud to endorse Joe Biden to be the next president of the United States!” As video played of Harris, Booker and Biden holding hands played, the journalist cheered, “With the polls giving him a big lead in Michigan, Joe Biden campaigned with some prominent supporters including the Michigan Governor Gretchen Whitmer. It was a show of unity among moderates in the party.”

As a frame of reference, Senator Harris’s American Conservative Union (ACU) lifetime score is 4. It was 0 in 2017. Americans for Democratic Action, the liberal version of ACU, gives her a perfect 100 percent. So both liberal and conservative groups understand Harris is a liberal. Why can’t O’Keefe recognize this? 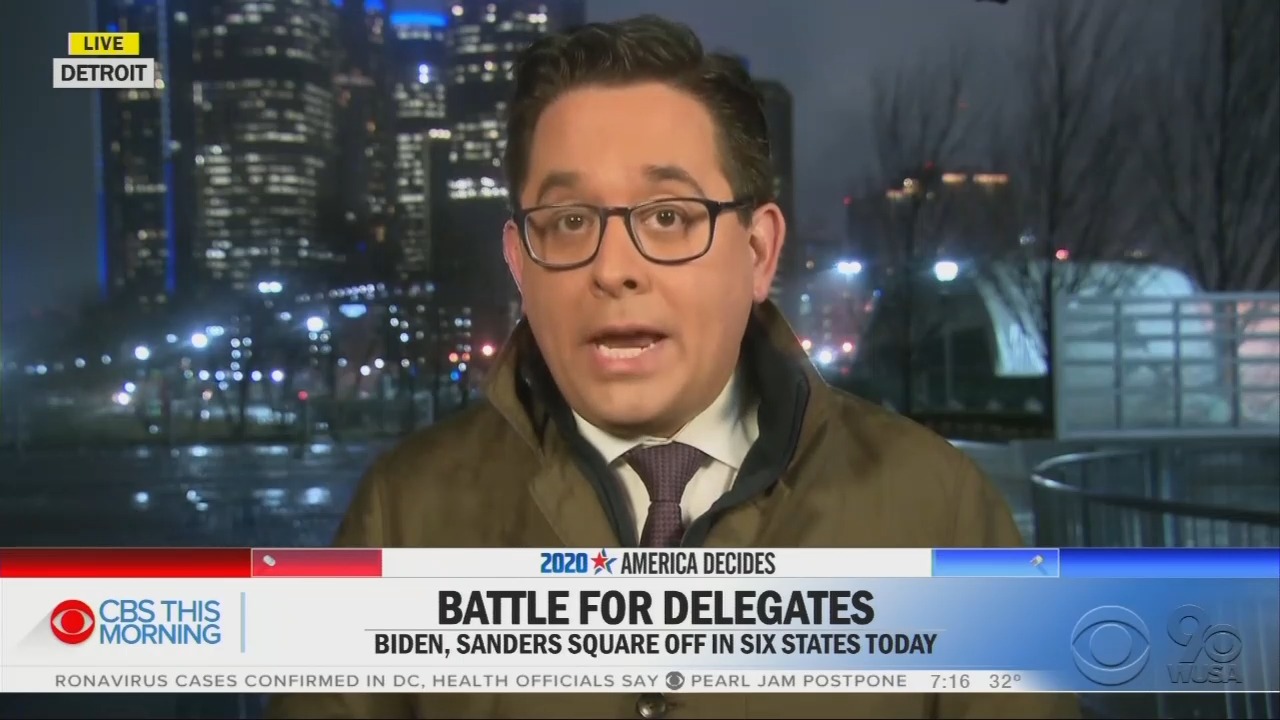 CBS's O’Keefe has a long history of pretending the 2020 Democrats are moderates. Last summer, just prior to the first debate, he insisted that the event “could be a big night for the lesser known, more moderate, Democrats on stage who are eager to break through.”

The bar to being a “moderate” should be a little higher than not vacationing in the old Soviet Union — as Bernie Sanders once did. Not being a socialist does not equal “moderate.”

TONY DOKOUPIL: Now, to the other major story we're following today crucial day in the Democratic presidential race. Voting is already under way in Michigan where both Joe Biden and Senator Bernie Sanders have been campaigning in recent days. It's one of six states holding primaries or caucuses today. Three hundred and fifty two delegates on the line. Washington, Idaho, Missouri and Mississippi are also heading to the polls. But Michigan, again, is the day's big prize. Two recent polls show Joe Biden has a double digit lead there. Ed O'Keefe is in Detroit for us. Ed, good morning. Politics is usually about hand shakes and kissing babies but the coronavirus, I imagine, is complicating that effort. How it is affecting the campaign?

ED O’KEEFE: Well, good morning, Tony. Here in Michigan there actually are no reported cases of coronavirus yet so state officials say they have no shortage of poll workers. In Washington State, which, of course, has been heavily effected by the virus, they vote by mail. Officials there are being encouraged to open the ballots while wearing gloves.

KAMALA HARRIS: I'm so proud to endorse Joe Biden to be the next president of the United States.

O’KEEFE: With the polls giving him a big lead in Michigan,  Joe Biden campaigned with some prominent supporters including the Michigan Governor Gretchen Whitmer. It was a show of unity among moderates in the party. [As O’Keefe says “moderates,” video is of Biden holding hands with Cory Booker and Kamala Harris.]

JOE BIDEN: We're going to you night Democrats, Republicans, independents of every stripe. That's what the nation needs. We need to bring the country together.

O’KEEFE: Bernie Sanders won the Michigan primary four years ago and he needs to win again if he hopes to catch Biden in the delegate race.

BERNIE SANDERS:  One of the difference between Joe Biden and myself is that Joe bailed out the crooks on wall Street and nearly destroyed our economy 12 years ago.