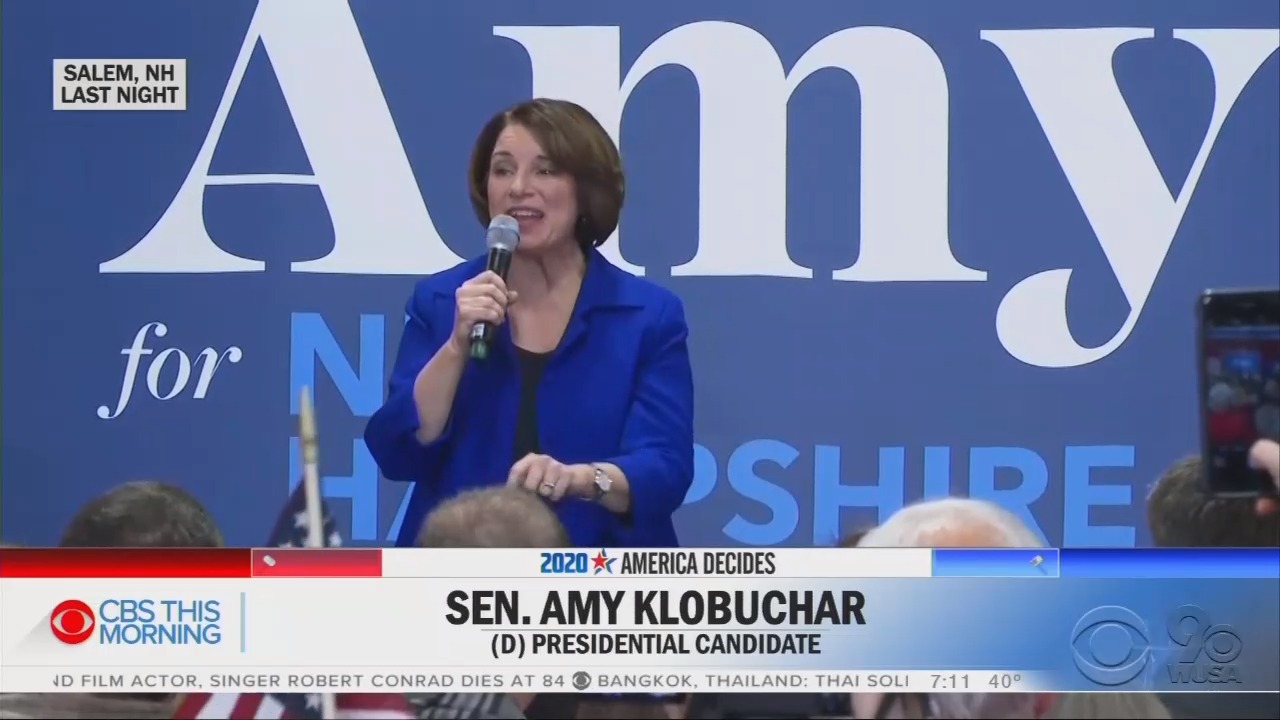 During the 2020 Democratic primaries, CBS This Morning journalists have repeatedly spun several of the candidates as “moderates.” (With the exception of socialist Bernie Sanders. That would probably be too much of a stretch.) This happened again on Monday as Ed O’Keefe labeled liberal Senator Amy Klobuchar a “moderate.” He also touted which candidates in New Hampshire are securing the “moderate” vote.

Before playing a clip of the Minnesota Senator hyping her campaign donations, O’Keefe spun: “Another moderate, Senator Amy Klobuchar is surging in late polls.” Klobuchar hardly represents the center. Her lifetime American Conservative Union score is 4. (In 2017, it was 0. In 2018, it rose to 5.)

Klobuchar is radically pro abortion, promising to “reverse Trump abortion policies in the first 100 days.” She supports extensive gun control restrictions and is “open” to expanding and packing the “Supreme Court.”

O’Keefe highlighted a new CBS poll as a way of touting other possible moderate choices:

In the 8 AM hour of the show, co-host Anthony Mason talked to Biden and asked: “Mr. Vice President, you appear to be bleeding support from moderates.”

Let’s break this “moderate” idea down: Biden? The former Vice President and Senator is certainly a liberal. His lifetime American Conservative Union score is 12 and the Democrat has drifted farther left as the years go by. His 2008, 2007 and 2006 scores are, respectively: 0, 0, 4. During Friday’s debate, he promised a strict litmus test for any Supreme Court candidates, requiring that they agree to support abortion rights.

CBS's O’Keefe has a long history of pretending the 2020 Democrats are moderates. Last summer, just prior to the first debate, he insisted that the event “could be a big night for the lesser known, more moderate, Democrats on stage who are eager to break through.”

As socialist Sanders continues to rise, expect to hear more touting from CBS on all the “moderate” alternatives.

A transcript of the segment is below. Click "expand" to read more:

TONY DOKOUPIL: New Hampshire votes tomorrow in the first in the nation primary. It's likely to be the last stand for some of the Democratic candidate. The CBS News battleground tracker shows Senator Bernie Sanders leading the field. He’s followed closely by Pete Buttigieg. And one week after the Iowa caucuses, the state’s Democratic Party finally revealed Mayor Buttigieg won the most delegates won the first delegates with Sanders’s 12. Ed O’Keefe is in Keene, New Hampshire for us. Ed, good morning. Are the candidates changing their strategies?

ED O’KEEFE: Good morning, Tony. They sure are. Polls will be open 24 hours from now and they are attacking each other like never before. Senator Sanders and Mayor Buttigieg especially going after each other on policy and how they are raising campaign cash. While former Vice President Joe Biden is making a last ditch attempt to save his campaign.

PETE BUTTIGIEG: This is, I think, what winning feels like.

O’KEEFE: The current front-runners former Mayor Pete Buttigieg and Senator Bernie Sanders blanketed the air waves, Sunday, and spent most of the day attacking each other.

BERNIE SANDERS: You know, Pete has raised campaign contributions from over 40 billionaires.

BUTTIGIEG: The plan is so expensive that Senator Sanders himself freely admits he has no idea how it is supposed to be payed for.

BIDEN: You’re going to have to win a lot of places that, in fact, have very diverse populations. The assertion that he's ready across the board, I don't see it.

BUTTIGIEG: The voters who know me best in the African-American community, those in South Bend, are backing me.

AMY KLOBUCHAR: My staff told me in the two days since the debate from regular people online we raised over $3 million.

O’KEEFE: And then there's Senator Elizabeth Warren, who also attacked Buttigieg and Biden in the past and is now calling for unity.

ELIZABETH WARREN: Look, we're going to have to bring our party together in order to beat Donald Trump. And the way we do this is not by launching a bunch of attacks on each other and trying to tear each other down.

O’KEEFE: Just like in Iowa, Democratic primary voters remain undecided. Only 39 percent say they've definitely made up their mind and 37 percent tell us they would consider somebody who is not even on the ballot here, former New York Mayor Mike Bloomberg who, of course, is skipping the first for contests. Tony?

DOKOUPIL: Hard state to poll. Hard to predict as well. Thank you, Ed.

MASON: Mr. Vice President, you appear to be bleeding support from moderates particularly in our latest poll to Pete Buttigieg in New Hampshire.