All three morning shows on Monday ignored the move by Congress to investigate ABC covering up the network’s burying of the Jeffrey Epstein story back in 2016. House Minority Leader Kevin McCarthy co-authored a letter to ABC’s president about the sexual predator and how journalist ABC Amy Robach was not allowed report on her extensive 2016 findings. McCarthy wrote, “What appears to have been presented to Ms. Robach is first-hand evidence of human trafficking.” 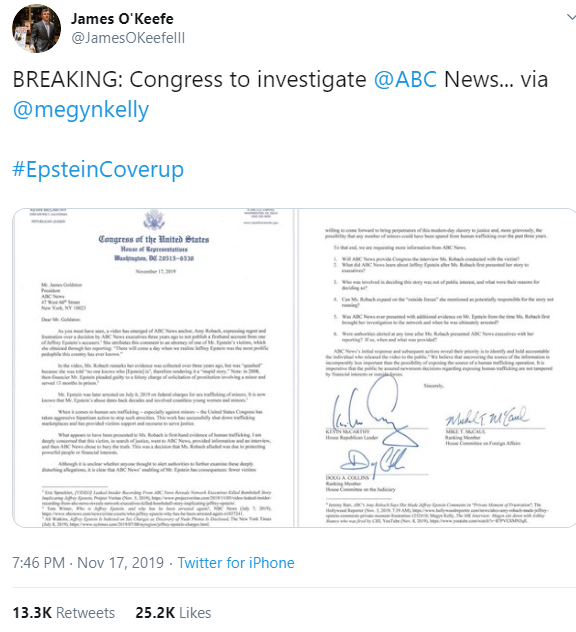 In the letter, McCarthy (as well as Republicans Mike McCaul and Doug Collins) gravely warned the media outlet:

Although it is unclear whether anyone thought to alert authorities to further examine these deeply disturbing allegations, it is clear that ABC News’ enabling of Mr. Epstein has consequences: Fewer victims willing to come forward to bring perpetrators of this modern-day slavery to justice and, more grievously, the possibility that any number of minors could have been spared from human trafficking over the past three years.

This latest twist on the Epstein/ABC connection came from Megyn Kelly. She tweeted: 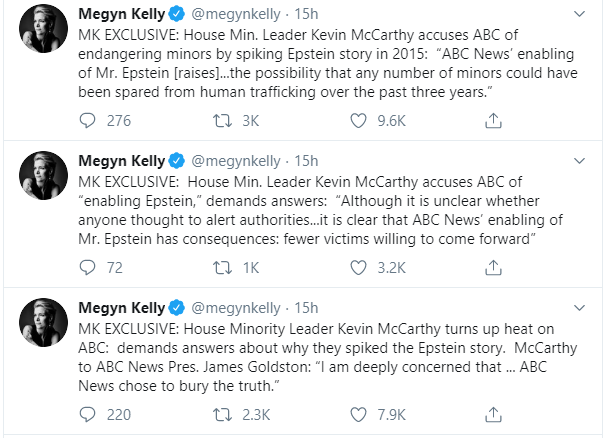 Instead of covering this possible conspiracy by ABC to tank a bombshell story, all three networks focused on a different, more palatable Epstein angle: A debacle of an interview given by Britain’s Prince Andrew to the BBC. ABC, CBS and NBC offered a combined 22 minutes and 29 seconds to this.

Prince Andrew is accused of having sex with a woman who claims Epstein kept her as a sex slave. Rather than focus on how these allegations became prominent, Today’s Stephanie Gosk gosspied on the BBC interview: “One royal watcher describes it as a plane crash into an oil tanker causing a tsunami kind of bad.” 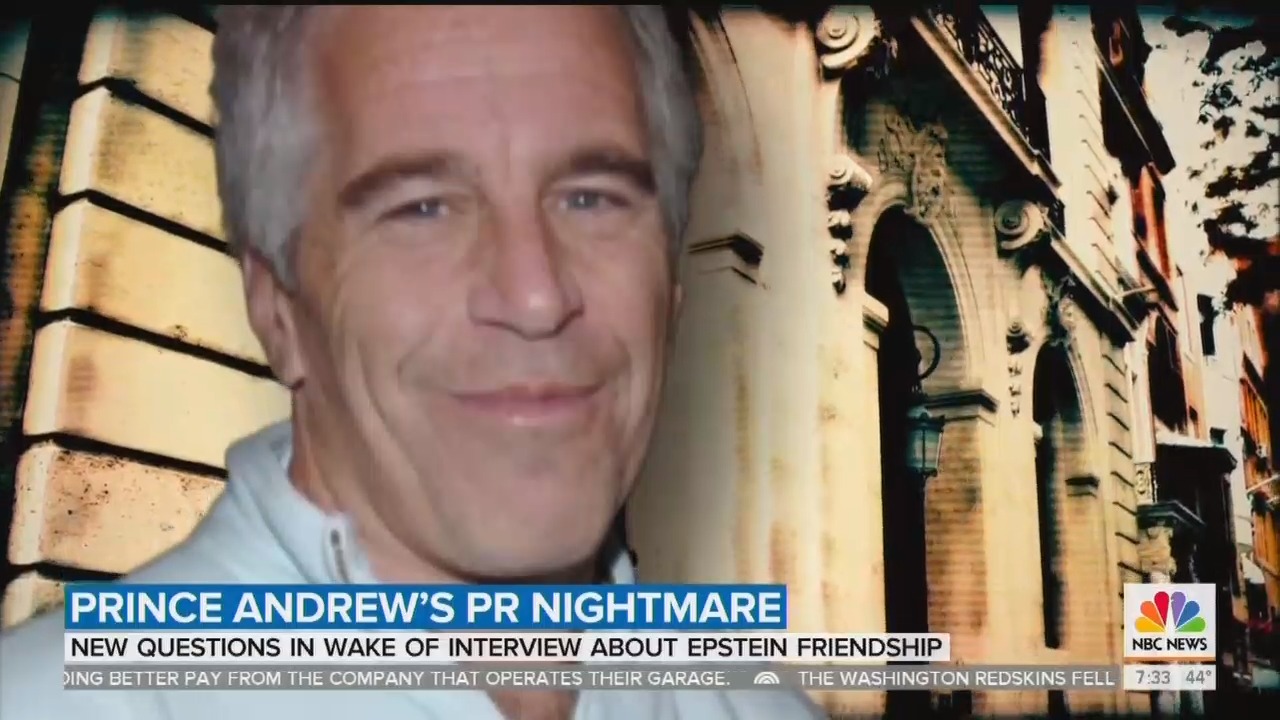 On CBS This Morning, co-host Anthony Mason hyped, “In the headlines in the British press, this interview is being called a ‘train wreck’ and a ‘catastrophic error.’ Why do you think the Prince agreed to do it?”

On ABC’s Good Morning America, reporter Eva Pilgrim heralded, “This interview sparking an immediate firestorm. One UK paper calling the Prince 'entitled and obtuse.'” It was ABC's Robach, caught in an August 2019 hot mic, who talked about the Prince and the claims of Virginia Roberts.

Project Veritas first explained on November 5, 2019, quoting Robach's hot mic video: “The Palace found out that we had her whole allegations about Prince Andrew and threatened us a million different ways.”

Instead of covering the O’Keefe bombshell and the network’s refusal to run the story, ABC has instead attempted to hunt down the person who leaked the Robach video. Yet, ABC (and the other networks) will cover this gossipy angle because it involves the royal family.