Showing once again that the journalists and media analysts on MSNBC can live in a different world, the network on Tuesday hosted a conversation about the “moderate,” “middle-of-the-road” candidates in the 2020 Democratic field. After Chris Jansing fretted about whether the overall Democratic field could defeat Donald Trump, guest Michael Starr Hopkins offered this opinion: “Pete Buttigieg is someone who is a moderate but has little experience when it comes to actually governing.”

Buttigieg, the man who wants to radically pack the Supreme Court and favors abortion at every level is a moderate? MSNBC host Chris Jansing then turned to New York Times editorial board contributor Mara Gay, saying, “Speaking of sort of those middle-of-the-road candidates, Mara, your paper is reporting that they're following Amy Klobuchar's campaign.”

Jansing then lumped in another so-called moderate, asking of Gay: “Are these two legit challengers to Joe Biden's down the middle-of-the-road candidacy or is that wishful thinking on the part of their supporters?”

Now, Biden is a moderate? His lifetime American Conservative Union score is 12 and the Democrat has drifted farther left as the years went by. His 2008, 2007 and 2006 scores are, respectively: 0, 0, 4. As for Klobuchar, her lifetime score is 4.70. These are the “moderates” in the Democratic field, according to MSNBC anyway.

In July, CBS This Morning highlighted mysterious “more moderate” 2020 Democrats for the second presidential debate. But the show’s hosts didn’t identify who they might be. In September, the same program hailed Buttigieg’s “moderate” health care plan as “pretty good.” Moderate apparently means not Bernie Sanders-style socialist. 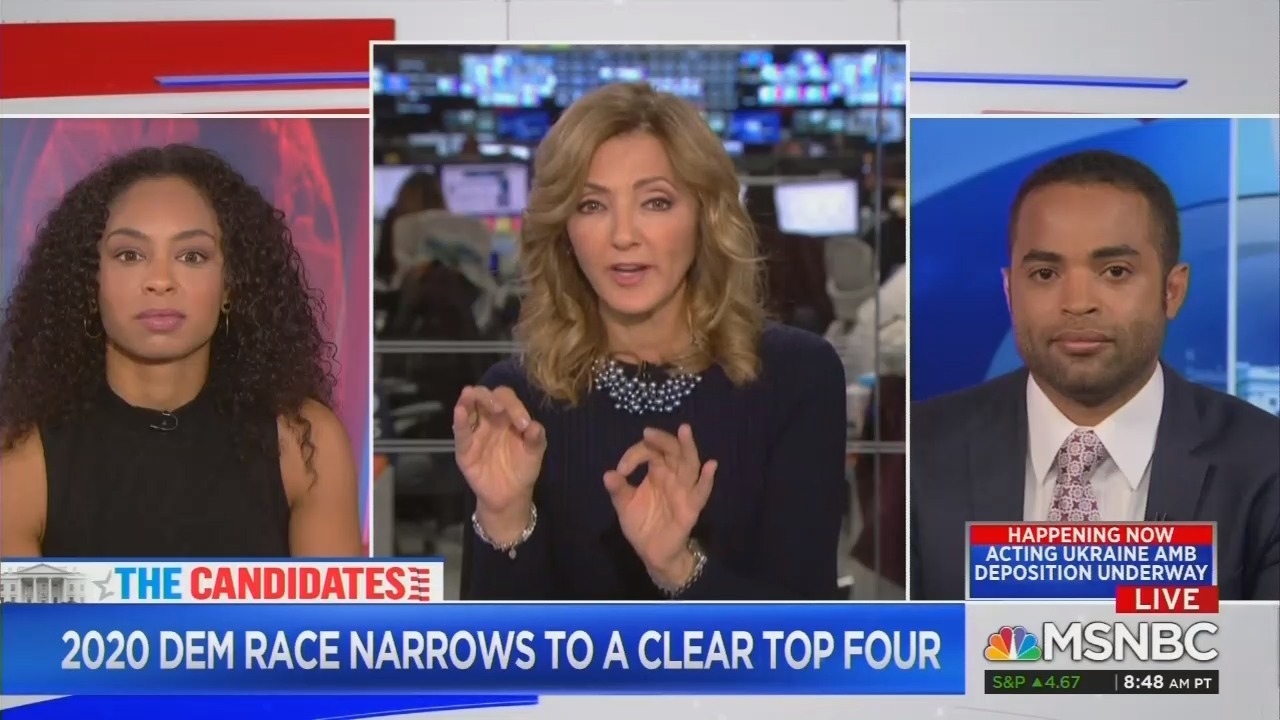 CHRIS JANSING: In national, Iowa, New Hampshire polls and fund-raising, the names are the same. Biden, Warren, Sanders, Buttigieg. When you break it down, all of them are white, three are men, one woman. Three are 70 or older, the other is 37. One is gay, only one is outside a state on the east coast or New England. None has won a state-wide race outside of New England, unless you count Biden running with Obama. None is from a state that has more than 11 electoral college votes. None are a current or former governor and only one has served in the military. So when you look at those numbers, first of all, you look at those candidates and look at the key Democratic question which is who can beat Trump, how should that list make Democrats feel?

MICHAEL STARR HOPKINS (Northern Starr Strategies founding partner): It should make Democrats worried. Pete Buttigieg is someone who is a moderate but has little experience when it comes to actually governing. When Bernie Sanders talks about giving away a lot of things, talks about Medicare for all, it opens up a vulnerability within the party. Democrats have to turn out Republicans. Republicans are going to turn out. The question is whether the Obama coalition, Democrats, independents and kind of upset Republicans are going to show up this go-around. They didn't in 2016. Democrats need them to show up in 2020.

JANSING: Speaking of sort of those middle of the road candidates, Mara, your paper is reporting that they're following Amy Klobuchar's campaign. Following her performance in the debate, she's getting a second look from a lot of voters in Iowa. In fact, last night on announced on Rachel Maddow that she has raised $2 million. Then you have Pete Buttigieg, also climbing in the polls and bringing in a lot of money. Are these two legit challengers to Joe Biden's down the middle of the road candidacy or is that wishful thinking on the part of their supporters?

MARA GAY (MSNBC contributor): No, I think time will tell, but certainly given that Joe Biden has stalled and fallen in the polls and that his performance has been, quite frankly, weak on the campaign trail so far, I think folks who are on the more moderate side of the party are very interested in finding someone to fill that vacuum. And Amy Klobuchar and Pete Buttigieg, especially with their strong debate performance last week, seem really well-poised, especially with Pete Buttigieg's fundraising dollars, to do that.