Jay Sekulow, Donald Trump’s lawyer, sparred with CBS This Morning co-host Tony Dokoupil on Friday, offering a feisty response and forcing the network to actually hear about Adam Schiff’s fake transcript from the Ukraine hearing. As the Media Research Center’s Nick Fondacaro noted on Thursday, CBS and the other networks skipped the fabricated transcript read by the California Democrat.

It included lines that sound like something out of a mobster movie. Schiff fabricated, “And I'm going to say this only seven times, so you better listen good. I want you to make up dirt on my political opponent? Understand?” Lots of it.” This Morning on Friday again skipped Schiff’s deception.

As Dokoupil badgered him on Ukraine, Sekulow retorted, “Why didn't Adam Schiff just read the transcript instead of doing a parody when he started the event off as if it was a Saturday Night Live routine?” Not interested in the topic, Dokoupil sputtered back: “That's a question you can ask to Adam Schiff if you guys sit down together.”

This is the ONLY time the fake transcript was mentioned on CBS, Friday.

Later, the two fought again over the phrasing of the now publicly available call summary:

TONY DOKOUPIL: The transcript. Was it appropriate for the President to invoke a —  to invite a foreign government to dig up dirt on his main political rival?

DOKOUPIL: The said he'd heard very bad things. Things that have not been proven. Things that there are no evidence for.

SEKULOW: “Do me a favor. You’re looking into corruption.” Let me ask you a question, you think Ukraine's had an issue with corruption?

SEKULOW: You think the President of the United States might be able to raise that? You think that's okay?

A transcript of the FULL segment is below. Click “expand” to read more.

TONY DOKOUPIL: Jay Sekulow serves as counsel to the president. And he joins us now from Washington. Jay, good morning. 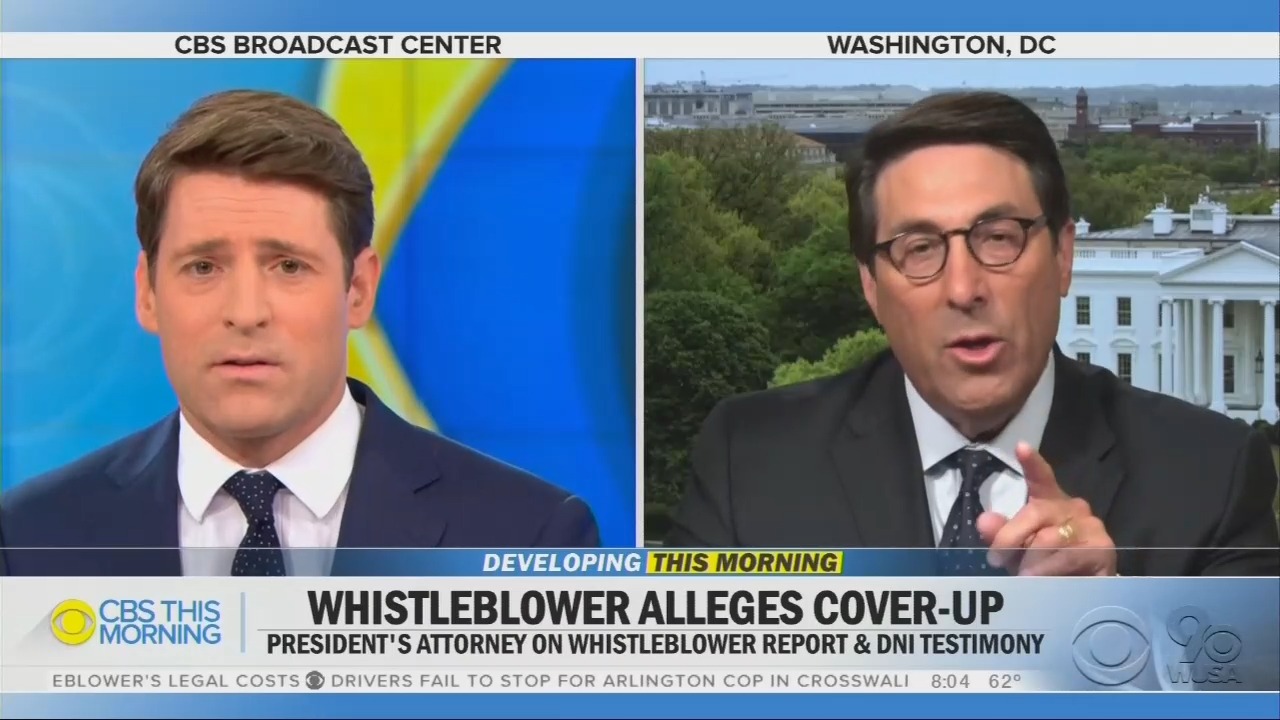 DOKOUPIL: Yesterday, we learned that the acting director of National Intelligence considers this report to be serious. It was found to be credible, and it's believed that the whistleblower acted in good faith. So, let's move to the contents of the complaint and see if we can agree on some of the things that have happened. Because some Republicans pointed out, hasn’t been proven. On the question of whether the call was moved to a server meant for intelligence matters, a political call moved to a server for intelligence matters, did that happen? And if so, why?

SEKULOW: Well, first of all, I'm not the White House counsel, I'm the president's counsel. That's a different role. So, I'm not involve the in how the White House internally handles documents.

DOKOUPIL: Has the President told you that he did that? And if so, why?

SEKULOW: I will never you — First of all, I never had that conversation with the President. I'm not going to tell you the conversation I had with the President. But let's get a couple of facts that you said initially here, let's get things clarified. This individual has no firsthand knowledge, none, of the events outlined in the document that apparently was addressed --

DOKOUPIL: Mr. Sekulow, I want to interrupt, because I --

SEKULOW: Can I finish a sentence, please before you start?

DOKOUPIL: Because two Trump administration appointees have found the report to be credible. So, what my goal is here is to find out what is, what actually happened.

SEKULOW: Hold it. Hold it. Second hand information that would not be admissible in a U.S. District court in the middle district of Georgia, okay. Let’s be realistic.

DOKOUPIL: But did it happen, sir?

SEKULOW: Did what happen?

DOKOUPIL: Was the conversation moved into this separate server? And if so, why?

SEKULOW: You have the wrong guest. I'm not the White House counsel. I am the President's counsel. I don't decide where things are moved or how they're handled on a security matter.

DOKOUPIL: Then as the President's counsel, let's talk about the call that the president declassified and released a partial transcript of. A kind of call summary.

SEKULOW: That was the —  hold it. There's the normal disclaimer on there that was not, as you said, a word-for-word verbatim transcript that's on these. Apparently that's the standard operating practice. The question that should be asked, and that's not being asked here is With the context of what took place at the hearing yesterday, why didn't Adam Schiff just read the transcript instead of doing a parody when he started the event off as if it was a Saturday Night Live routine?

DOKOUPIL: That's a question you can ask to Adam Schiff if you guys sit down together. Regarding the call itself, according to the call summary, the President on July 25th, a time when Joe Biden was leading in the polls, seemed to be a major rival of the President for 2020, the President brings up his name in a conversation with a foreign leader. Seeming to invite the uncovering of dirt about a political rival. Was that appropriate?

SEKULOW: There is no violation of law, rule, regulation, or statute with that phone call.

DOKOUPIL: Was it appropriate?

SEKULOW: No —  look, the President determines what communications he wants to have and what he believes is appropriate in his communications with another head of state. And by the way, the fact it the White House decided to release this transcript. And they gave it to you all, and they gave it to Congress in an abundance of transparency. We should not be happy that conversations with presidents are going to be disclosed if this starts becoming a regular practice.

DOKOUPIL: Has the President ever —

SEKULOW: Why? It's —  hold it. It's hard to conduct affairs of state with other foreign leaders when this nonsense is going on.

SEKULOW: This is hearsay.

SEKULOW: Yes, he did. I don't think we should be gloating that that's a great day for America that we're releasing calls.

DOKOUPIL: We're merely trying to get on the record what happened and what did not happen. In the call the President brought up Joe Biden and invoked Rudy Giuliani suggesting that --

SEKULOW: The President of Ukraine, let's be clear, let’s be clear.

DOKOUPIL: Let me get a question out. I need to get this out, sir.

SEKULOW: Let me be clear! The president of Ukraine raised Rudy Giuliani. So let's get that clear. Now go ahead.

SEKULOW: Hold it. First of all, I have not been involved in this. But I will be very clear, I'm not going to discuss what the President discussed with me about any event in the context of attorney/client privilege, number one. Number two, I can go back to the initial statement. What in the conversation violates a rule, regulation, or law? What is the violation of law?

DOKOUPIL: That is not the standard, Mr. Sekulow. This is a political question that's been before congress in a call --

SEKULOW: Who makes the determination involving what the standard is?

DOKOUPIL: In a call involving taxpayer money and the question of when it would be sent to Ukraine, it was on hold for multiple months, the taxpayer money —

DOKOUPIL: He's holding back funding at the time of the call --

SEKULOW: This is what’s so ironic. Here’s what you’re doing.

DOKOUPIL: He's holding back funding at the time of the call, and he's asking a foreign government to look into the political rival —

DOKOUPIL: Can you enlighten us, sir?

SEKULOW: I am not — Why are you having so much trouble understanding this? You asked me to be a guest on your broadcast!

DOKOUPIL: You represent the President’s counsel!

SEKULOW: Yes, but I'm not the White House counsel! I don't make those decisions. Those are conversations I have.

DOKOUPIL: So, are you here to talk about things other than your client?

SEKULOW: No! Talk about the transcript. That's what you invited me on your broadcast to do! Why don't we do that?

DOKOUPIL: Here's the question regarding —

DOKOUPIL: The transcript. Was it appropriate for the President to invoke a —  to invite a foreign government to dig up dirt on his main political rival?

DOKOUPIL: The said he'd heard very bad things. Things that have not been proven. Things that there are no evidence for.

SEKULOW: “Do me a favor. You’re looking into corruption.” Let me ask you a question, you think Ukraine's had an issue with corruption?

SEKULOW: You think the President of the United States might be able to raise that? You think that's okay?

SEKULOW: For the President to raise that issue --

DOKOUPIL: Hold on. The Senate approved the aid back in may because they were satisfied that significant steps had been taken to root out that corruption. It's yet to be explained why the President held the aid back for three months and only released it one day after Adam Schiff requested the whistleblower's complaint. That’s a curious timeline. If you can enlighten us, please do.

SEKULOW: I'm going to enlighten you to something you don't want to pay attention to and that is the transcript itself. You're trying to figure out what was the basis upon which the President of the United States thought there should be, if that is the case, a hold-back of funds pending a whatever it was going to be, whatever issues, the State Department and all the other agencies were dealing with. I cannot look into that because I'm the private counsel. So, when you invite me on your network, let's be clear on what I can and cannot say. If we want to do this again!

DOKOUPIL: All right, Mr. Sekulow. Thank you very much. We appreciate your time.