Leave no tragedy unexploited. That’s been the response by many in the liberal media after this weekend’s mass shootings. This ugly idea escalated on Wednesday as the official Twitter account of Trevor Noah’s Daily Show smeared Fox News, calling it the “audiobook” of the Texas murderer: 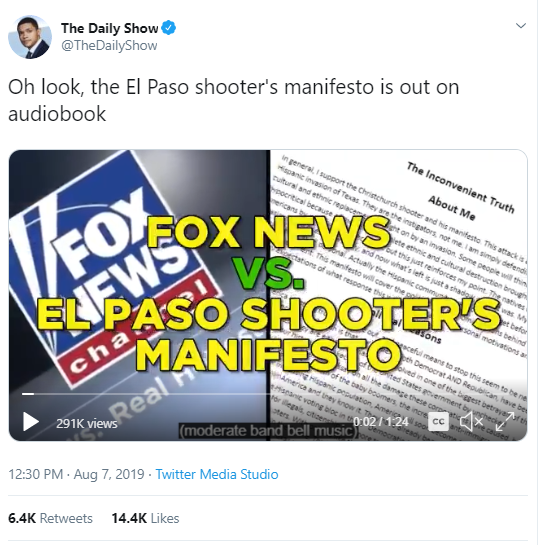 As noted by the Daily Caller, the Comedy Central video montage then took examples of Fox News personalities sounding the alarm on illegal immigration and linked it to the manifesto of a man who murdered 22 people and injured 24.

Watching the video, there’s nothing “comedy” about it. It’s a pure political attack on Fox. But that’s not surprising coming from Noah. On Tuesday night, he attacked the cable out let for not demanding gun control.

On election night 2016, he suffered a total meltdown, saying, “This is it, the end of the presidential race and it feels like the end of the world.” Noah added, “I’m not going to lie. I don’t know if you’ve come to the right place for jokes tonight because this is the first time throughout this entire race where I’m officially shitting my pants.”