CBS’s Gayle King: Ilhan Omar and ‘The Squad’ 'Love This Country So Much’

Citing her own interview with Rashida Talib, Ilhan Omar, Alexandria Ocasio-Cortez and Ayanna Pressley, King insisted of “Squad” members (who have refused to condemn violent Antifa):  “In fact, I would say they love this country so much. They spoke with such pride about being in Congress.” The co-host concluded, “So for [Trump] to say with a big microphone they hate this country, that just is simply not true. And it scares me that he's putting that narrative out there.”

As the Media Research Center’s Tim Graham’s pointed out, the networks and cable have ignored the fact that three of the four Squad members were asked on Monday about whether they would condemn Antifa’s violent attack in Tacoma Washington. Does it show love for America by NOT explicitly stating that such violence is unacceptable?

Omar in 2017 blamed the U.S. military for killing “thousands of Somalis” during the battle of Mogadishu in 1993. That, of course, was not true. The Washington Examiner explained:

The freshman congresswoman's missive in a 2017 tweet was dug up on Monday. She had been rebuffing a Twitter user’s assertion that the Battle of Mogadishu, which killed more than a dozen U.S. soldiers, was the “worst terrorist attack in Somalia history.”

“In his selective memory, he forgets to also mention the thousands of Somalis killed by the American forces that day! #NotTodaySatan,” Omar, a Somali refugee, tweeted back.

Perhaps King isn't aware of any of these quotes from Squad members. 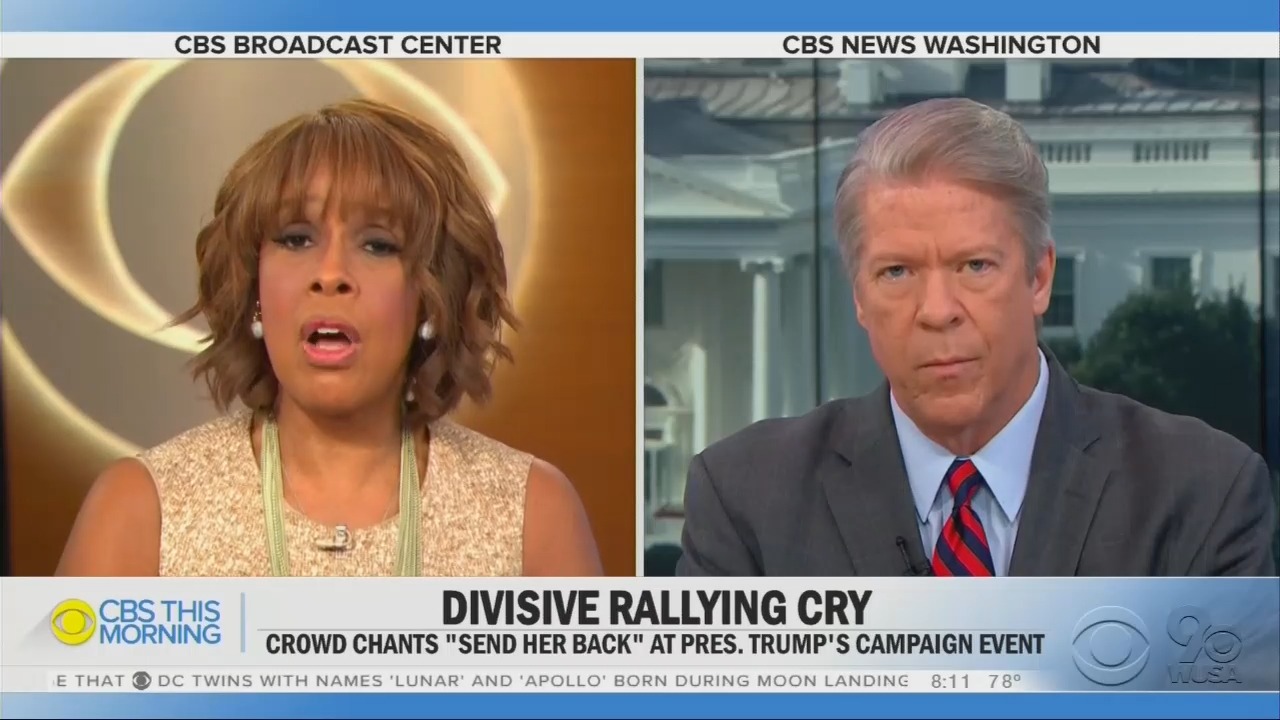 GAYLE KING: Major, when you're watching it, I think for a lot of people this is very frightening. I just want to help — I would like you to help us understand why can't you disagree with the President without being called un-American. I just met The Squad the other day. I don't know them, never talked to any of them before the interview and only spent 30 minutes. Not one of them has ever said, “I hate America.” Not one of them has ever said, “I don't want to be here.’ In fact, I would say they love this country so much, they spoke with such pride about being in Congress. They pointed out where they sat in that room and the bills that they passed and the passion that they have for this country and their people and their constituents. So for him to say with a big microphone they hate this country, that just is simply not true. And it scares me that he's putting that narrative out there.

MAJOR GARRETT: He's putting that narrative out there, and for the Republican Party, which, Gayle, has become the Trump party, when the President says you disagree with me, he's essentially saying you're doing something un-American. He regards his supporters as patriots, true American patriots, oftentimes, elections, e-mails sent to Trump supporters will say” true American patriots.” This is one of the things that's at stake in 2020. What is our definition nationally, collectively of what patriotism is or isn’t? Is dissent unpatriotic? Is that the essential core of the Trump message? Some Trump supporters actually believe that. Others are not exactly sure of that. But it's one of the central, I would argue, primal questions, in the American politics in the 2020 election. What is our definition of our self? What are we comfortable with? What are we willing to live with?

TONY DOKOUPIL: Yeah. Who are we?

DOKOUPIL: All right, Major. Thank you very much. We appreciate the insights.