CBS This Morning on Thursday scored an exclusive interview with Tom Steyer, a newly announced Democratic presidential candidate, yet never once managed to refer to him as progressive or liberal. Instead, he is simply a “billionaire activist” who also is leading an expensive campaign to impeach Donald Trump.

Avoiding the liberal label, co-host Anthony Mason introduced, “Tom Steyer, the billionaire investor and activist who spent millions advocating for the impeachment of President Trump, is launching a campaign to take a job.” In a tease for the segment, guest co-host Michelle Miller called him the “the activist billionaire.” But, again, no ID of him as very progressive.

This is the same person who said his NextGen America group would not “work for a single candidate who is not pro-choice.” He’s also staunchly anti-Second Amendment. But instead of mentioning any of these points or calling him a liberal, Miller wondered if he vast fortune could be better put to use on other liberal causes:

Let’s talk about what’s in your win column. You poured $120 million into the midterms. Some would say you won the House back for the Democrats. Millions into campaigns against big oil, against big tobacco, against corporate tax loopholes. Why is $100 million running for president money well spent? 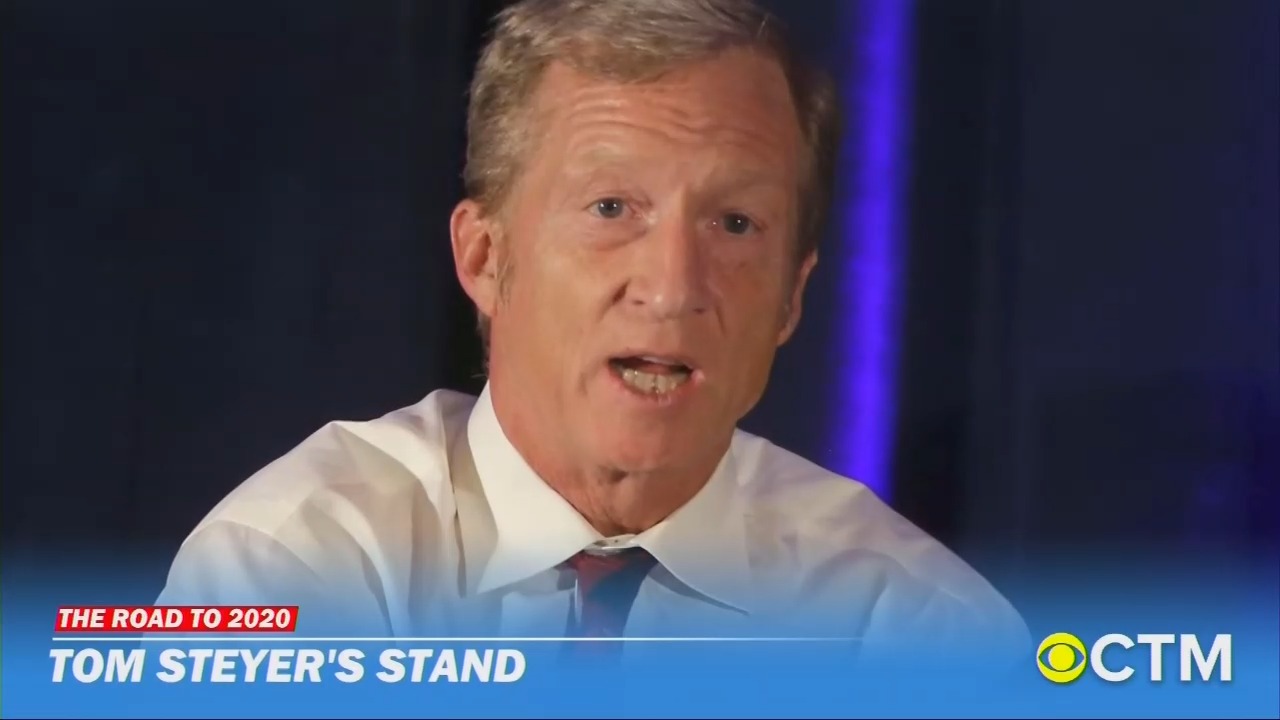 On Monday, This Morning co-host Tony Dokoupil wondered if Steyer “counts this running for president thing as charity?” On that day, at least, guest co-host Vladimir Duthiers managed to refer to Steyer as a “progressive billionaire activist.”

On Thursday, in a speed round of questions, the co-hosts pressed Steyer from the left to see if he supported these liberal agenda items:

“Do you support proposals for free college?

“Yes or no, would your insurance plan coverage provide for undocumented immigrants?”

MICHELLE MILLER: Tom Steyer's stand. The activist billionaire who's given millions to Democratic Party causes will be here for his first national TV interview since joining the race for president.

ANTHONY MASON: And Democratic presidential candidate Tom Steyer originally said he was not planning to run.

MASON: Plus Democratic presidential candidate Tom Steyer on his first TV interview since entering the race.

MASON: billionaire Tom Steyer spends big money on politics. Now he's running for president and he'll tell us why coming up on CBS This Morning.

DOKOUPIL: Democrat Tom Steyer tells us why he's running for president after he said he would not.

ANTHONY MASON: Tom Steyer, the billionaire investor and activist who spent millions advocating for the impeachment of President Trump is launching a campaign to take a job. He joined a field of 24 other candidates seeking the Democratic nomination for president after previously saying he would not run. As part of our continuing series "The Road to 2020," he joins us for his first national television interview since announcing his candidacy. Tom Steyer, good morning. Welcome.

MASON: What changed? You weren’t in this race in January. You specifically said, “No, I’m not running.” Now you are.

STEYER: Actually what I said specially was “I’m not running then.”

MICHELLE MILLER: At this time.

STEYER: Because I felt at that point I had a responsibility to push the impeachment of Mr. Trump. We had six million people who signed our petition. We were still a lonely voice in the wilderness saying, “He’s the most corrupt president in history. He’s unfit for the office. He’s dangerous to the American people.”

MASON: Are you giving up that campaign do that?

STEYER: No, I'm going to continue to fund that, but I believe we've won that argument.

MILLER: Let’s talk about what’s in your win column. You poured $120 million into the midterms. Some would say you won the House back for the Democrats. Millions into campaigns against big oil, against big tobacco, against corporate tax loopholes. Why is $100 million running for president money well spent?

TONY DOKOUPIL: Hearing you say that, first of all surprising giving your stature and your history. but also interesting because Elizabeth Warren, Bernie Sanders would say, “Hey, that's my campaign,” others' as well. When it comes to climate change, which is another issue for you, there are numerous candidates, including Jay Inslee who are taking on that issue, so what makes you different and can you be different enough to qualify for a debate with one percent of the poll?

MASON: Tom, I want to get some quick yes or no answers on some big questions.

STEYER: This reminds me of school. Yes or no.

MASON: Full disclosure, we actually went to school together. Here, some of the bigger questions that have emerged on the campaign trail are these issues: Do you support proposals for free college?

STEYER: Yes. Every one of these questions have a lot of nuance to it.

STEYER:  There's no question in my mind that we're under-investing in the education of college, including in college. And whether I go along exactly with Senator Sanders' exact proposal is a different question.

STEYER: But the idea of us providing quality public education from pre-k through college and including lifelong skills is something I absolutely support.

MILLER: Yes or no, would your insurance plan coverage provide for undocumented immigrants?

STEYER: The short answer is going to be yes. Once again, I want to talk about something broader, which is this: We have a failed immigration system. We should have comprehensive immigration reform, which is a classic thing that this government has been unable to do for decades. So in that context, what are you supposed to do with people who are part of society who live here, contribute to society, and yet are somehow under the radar are living in the shadows. They're a part of society.

DOKOUPIL: So we're doing yes or no plus.

STEYER: This is the classic thing. You can ask a question that has a million nuances.

DOKOUPIL: Fair enough, fair enough. One more. Do you support reparations for the decedents of slaves?

STEYER: Where I've gone on that is we should do a study to go back and see what that means. But the other answer if I had to give yes or no —

STEYER: No, no. Let me answer that one more clearly, Tom.

DOKOUPIL: You've got it.

STEYER: We have a society where people don't start at the same starting line and that's something that's been built in through centuries of unfairness and injustice. And exactly the best way to address that in society is a subject of a real study, but whether to address it as a society is not a question. Of course, we need to address that. That’s why I said a study. It's complicated. It's got to be perceived by Americans as to be fair across the board, and we've got to accept the idea that this is a society which has not treated people equally for centuries.

MASON: Tom, are you expecting to make the next debate?

STEYER: My attitude about the debates I don't think I can make July because I’m just too late. But I’m going to take very seriously getting on the debate stage in September.

MASON: Tom Steyer, thank you so much for being with us.