CBS: Could Tom Steyer Volunteering to Run for President Be Considered 'Charity?'

The journalists on CBS This Morning, Monday, reacted to far-left Tom Steyer’s possible presidential bid by wondering if it was an act of “charity” on his part. Also, co-host Anthony Mason blurted out that he “went to school” with the man now known for his drive to impeach Donald Trump.

Co-host Tony Dokoupil oddly speculated, “He’s pledged half of his wealth to charity. I wonder if he counts this running for president thing as charity?” Mason revealed, “I went to school with him.” Co-host Gayle King marveled, “That’s incredible.”

In May, Mason told Stephen Colbert that he campaigned for Lyndon Johnson: “I literally got off the school bus when I was eight years old and marched into LBJ headquarters and said I want to hand out leaflets.” (He tweeted NewsBusters the next day to insist, “In 1968, I campaigned for Richard Nixon.” 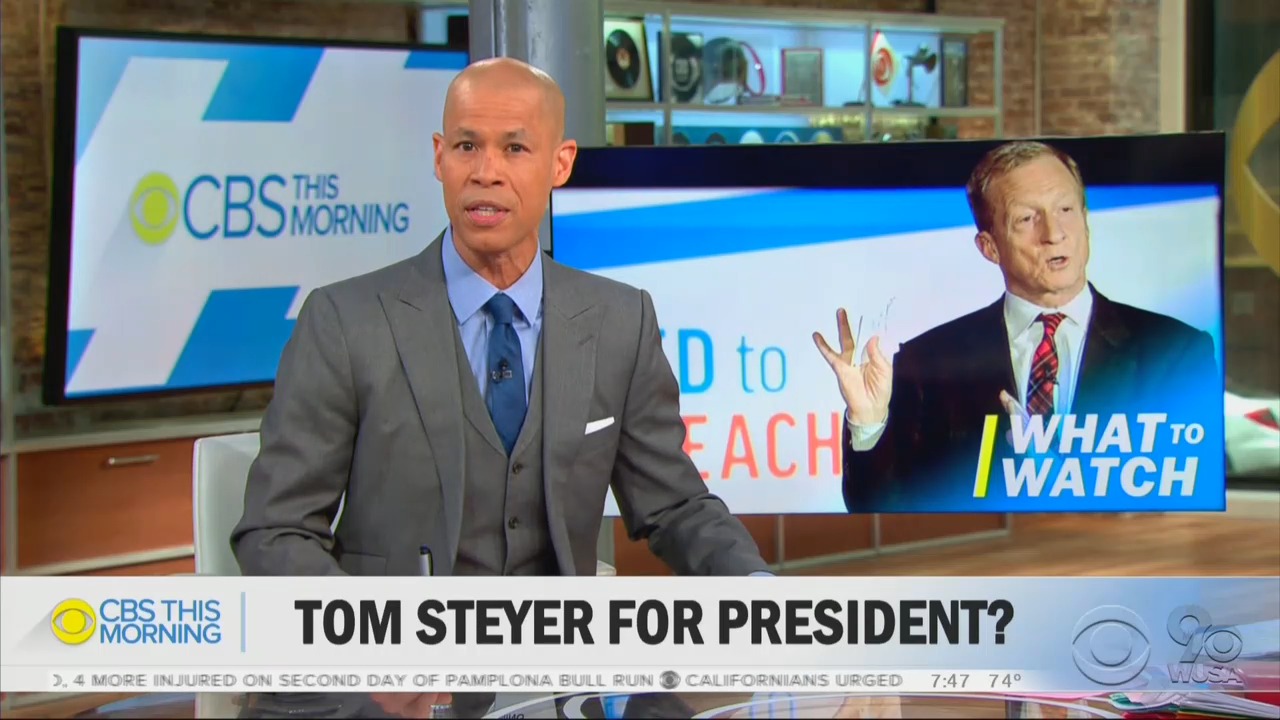 VLADIMIR DUTHIERS: The Democrats' crowded 2020 field may be getting bigger. CBS News has learned progressive billionaire activist Tom Steyer is expected to make an announcement tomorrow. A source close to the campaign would not confirm the nature of the announcement, but The Atlantic is reporting Steyer has privately told people he plans to enter the race. That would make him the 26th candidate, should he decide to get in.

GAYLE KING: And he has a lot of money. He spent $40 million on a campaign to impeach Donald Trump.

TONY DOKOUPIL: He’s pledged half of his wealth to charity. I wonder if he counts this running for president thing as charity?

ANTHONY MASON: I don’t think so.

KING: And Anthony, you know him?

MASON: I went to school with him.

MASON: He doesn't need to raise money. He's got his own.

DUTHIERS: He's a billionaire. He ran a very successful hedge fund. He’s putting that money to, perhaps, to a campaign we’ll be checking that out tomorrow.