Unforgiving Behar to Kyle Kashuv: Take a ‘Gap Year to Contemplate Your Racism’

View co-host Joy Behar, who has a history of saying awful things she ends up regretting, had little sympathy for Kyle Kashuv, a Parkland shooting survivor who just had his acceptance to Harvard University revoked. The move by Harvard came in the wake of the revelation that, at age 16, Kashuv made racist and anti-Semitic comments in an online forum.

Kashuv, unlike fellow survivor (and gun control activist) David Hogg, is a pro-Second Amendment supporter of the NRA. Discussing the teen on Tuesday’s show, the liberal Behar unleashed: “[People] say that young people do these kind of things, that they need to get a lesson. They need to take a lesson from this. Well, this is the lesson. The lesson is you're not getting into Harvard, okay? Take your gap year to contemplate your racism. That would be a productive year.”

After playing a clip of Kashuv saying he had changed since the racist comments, Behar mocked, “Well, it was only two years ago. Just saying.”

One might think that Behar would have more grace for someone who said something stupid. After all, she’s the woman who in 2018 mocked Christians as “dangerous” and having a “mental illness.” After a public campaign by the Media Research Center and others to bring attention to the remarks, Behar eventually apologized: “I was raised to respect everyone's religious faith. I fell short of that. I sincerely apologize for what I said.”

Behar routinely spouts off with dumb comments, such as that Republican men should get sterilized or that Donald Trump was responsible for a shooting in California. Maybe Behar will hold herself to this tough love standard the next time she gets into trouble. But don’t count on it.

A patrial transcript is below. Click “expand” to read more. 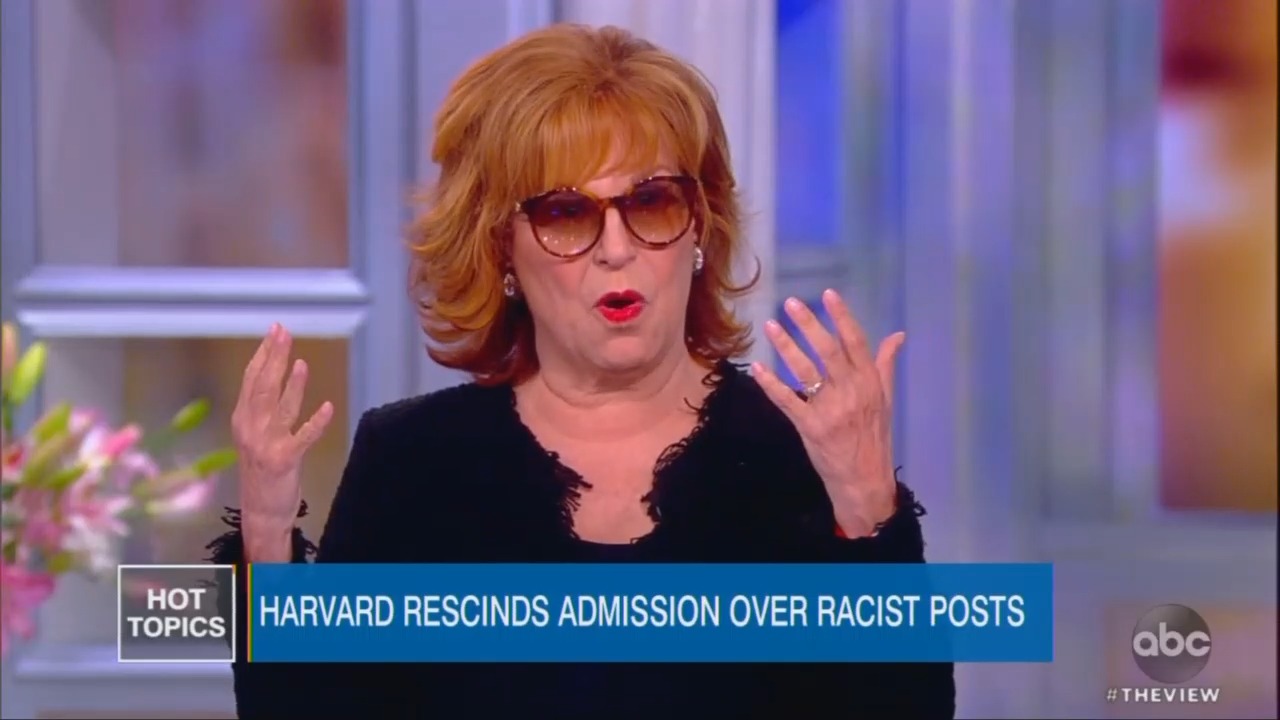 JOY BEHAR: So we've said how your social media can come back to haunt you many times. This happens over and over again and it's happening right now to Parkland school shooting survivor Kyle Kashuv. It seems that Harvard university just took back their acceptance offer to him after racist, sexist and anti-Semitic comments that he posted two years ago resurfaced online, okay? Here's what he's saying about it.

BEHAR: Well, it was only two years ago. Just saying. Did Harvard do the right thing, you ladies, by pulling his acceptance? And he was a very bright kid. He is a bright kid. He has a high GPA and SAT scores. And David Hogg, who is the face of the Parkland shooting, also got into Harvard with lower numbers. I'm just telling you the facts. What say you?

ANA NAVARRO: Moral character matters, and what can I tell you? Kyle, the bad news is you can't go to Harvard if you're a sexist misogynist but you can grow up to be president.

BEHAR: He could go to Trump University. They would take him.

BEHAR: They say that young people do these kind of things, that they need to get a lesson. They need to take a lesson from this. Well, this is the lesson. The lesson is you're not getting into Harvard, okay? Take your gap year to contemplate your racism. That would be a productive year.

MEGHAN MCCAIN: I mean, I was mixed on it too when I first heard it because obviously I don't think it's too much to ask 16-year-olds which, yes, is not a fully formed adult, but you're almost there, to not use misogynistic, anti-Semitic and racist language. Like, it doesn't seem like this is too big of a request from young people. I will say I hate mob culture. I hate online cancel culture, and there had been an online mob against him. For conservatives there's already this sort of hesitancy and questioning of higher education institutions, especially ivy leagues, because there seems to be such hostility towards our political beliefs. So I do —  I did wonder if he became a target because he was on the other side, because he's a pro NRA, pro gun activist and he had worked for Talking Points USA before he had gotten into Harvard.

So that I think put an extra target on his back. I mean, that's a bad wording but it put extra attention on him. So I don't know, I'm still mixed on it because I do think people can atone and you're right, I think going through something like a shooting, I don't know how you can go through something like that and it can't completely reanimate who you are. It's a horrific tragedy. So I'm mixed on it, but I do think the topic of if you're a student sitting next to him or her in class and they're uncomfortable around you is a valid one. I don't know anymore. I'm so mixed on this, I had a really hard time to know how I feel because I don't think it's not too much to ask to not say the N-word.