CBS This Morning journalists on Monday again lashed out at new pro-life legislation passing in several states, deriding them as “extreme.” Co-host Norah O’Donnell explained the efforts of Georgia and Alabama, wondering if Roe vs. Wade might be in danger.

Correspondent Jan Crawford dismissed: “I think it’s very, very slim that this new conservative Supreme Court is going to overturn Roe vs. Wade at this point. These state laws are just coming too fast and they are too extreme.”

Just last week, co-host John Dickerson covered Georgia’s new law, warning of the “controversial” and “restrictive” heartbeat bill: “Georgia Governor Brian Kemp is expected to sign one of the most restrictive and controversial anti-abortion laws in the country.”

On Monday, Crawford discounted the chances of these laws actually taking effect: “They're so at odds, they are so restrictive with Supreme Court precedent, that they're getting struck down in the lower courts. Courts are blocking them from even taking effect.”

According to an MRC study, this same network offered no coverage in January when New York state legalized late-term abortion (and certainly didn’t find the bill “controversial.”) 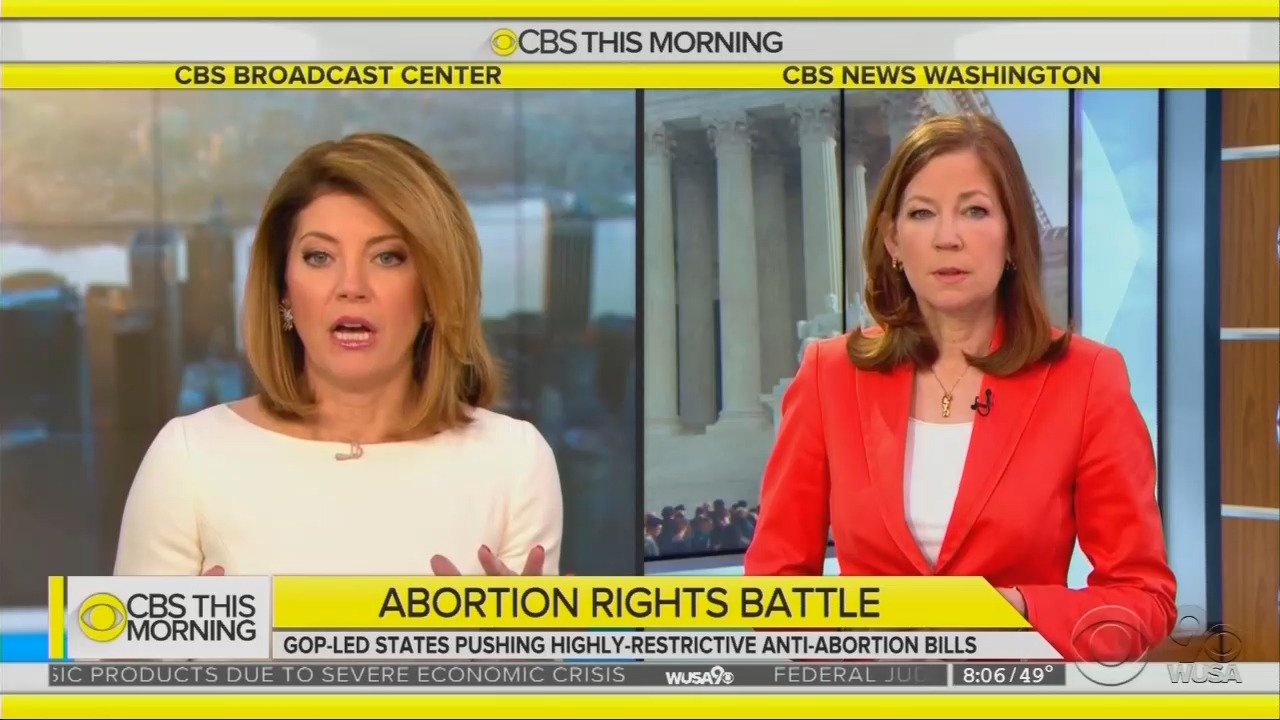 NORAH O’DONNELL: Conservative state legislators are making a new push to limit abortion rights. And Hollywood is fighting back. Actress Alyssa Milano just proposed a sex strike in response to a recent wave of state laws restricting or abolishing abortion. Milano posted this tweet asking women to give up sex until they have legal control of their bodies. Now, some critics say that would turn women into objects. At least five major movie production companies say they'll stop producing films in Georgia where an anti-abortion bill was signed into law last week. Jan Crawford is tracking this new campaign by abortion opponents. Jan, good morning. We’re talking about —

O’DONNELL: We're talking a number of abortion cases across thee country. If the Supreme Court takes up an abortion case, what are the chances they could overturn Roe vs. Wade?

CRAWFORD: Well, I mean, let’s get that out of the way right in the front. I think it’s very, very slim that this new conservative Supreme Court is going to overturn Roe vs. Wade at this point. These state laws are just coming too fast and they are too extreme. But what you're seeing is that since the Court has that more solid conservative majority, a lot of these Republican states are passing highly restricted abortion laws, in some cases almost outright banning them, hoping the new court will allow them and eventually overturn Roe v. Wade. Tomorrow in Alabama, lawmakers are scheduled to continue debating and will probably pass what will be the strictest anti-abortion rights law in the country.

It will ban abortion at every stage of pregnancy. Doctors could face years in prison for violating it. The only exception is if there's a serious risk to the mother's health. Rape and incest, not an exception. This comes after Mississippi, Ohio, Kentucky, and like you said, Georgia, already passed bills banning abortions once a fetal heartbeat is detected. That's usually six weeks into a pregnancy before many women even know they're pregnant. Now, by comparison, Roe vs. Wade and subsequent rulings say states can’t ban abortion outright before the fetus is viable outside the womb, that is usually about 24 weeks. Now, none of these recently passed heartbeat bills have gone into effect yet. And they are all facing, or will face, legal challenges. Supporters of the anti-abortion right measures say those challenges are exactly what they want because that could be the path to a Supreme Court, a chance to overturn Roe vs. Wade. But at this point, those odds I think are pretty slim. Norah?

O’DONNELL: Yeah, to just follow up quickly. What's the likelihood that any of these restrictions will make it to the Supreme Court?

CRAWFORD: Well, see, that's the thing. They're so at odds, they are so restrictive with Supreme Court precedent, that they're getting struck down in the lower courts. Courts are blocking them from even taking effect. When the lower courts look at them and then look at the Supreme Court precedent, Roe vs. Wade, a 1992 decision Pennsylvania vs. Casey, , they're striking them down. So these laws may not ever get to the Supreme Court. Like I said, it's almost too much too soon.

CRAWFORD: Well, as Norah said, some people say that objectifies women. Other people say she’s advocating absitenence. So maybe that’s something that the abortion opponents would get behind as well.

KING: I hear many women saying, “No thank you, Alyssa.”