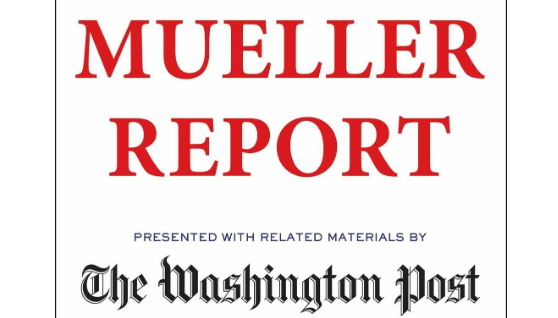 Don’t write an introduction to a report before you get the actual document or you might be disappointed. (If you’re part of the liberal media that is.) On Wednesday, the Washington Post released a print edition of the Mueller Report, complete with “introduction and analysis by reporters.” The cover blurbs the “long-awaited text.”

The lack of collusion and no charges of obstruction may be a disappointment, but Post writers Rosalind S. Helderman and Matt Zapotosky maintained the hyperbolic and apocalytpic tone that was the hallmark of the media's two year focus.

The focus is on a “rage”-filled Trump who “snapped.” After a brief description of Attorney General William Barr’s summary, it isn’t until paragraph 17 of the introduction that Helderman and Zapotosky let the air out of the balloon: “But the report confirmed, as Barr had suggested, that Mueller did not find a conspiracy between the Trump campaign and the Russians — though it suggested that they had a shared motive.”

In the introduction, which contains the important title “A President, a Prosecutor and the Protection of American Democracy,” the two begin:

“The special counsel investigation that threatened Donald Trump’s presidency was born out of the commander-in-chief’s rage.”

Continuing with the emotional language, Helderman and Zapotosky describe the firing of FBI Director James Comey:

On May 9, 2017, Trump snapped. In a sharp break from Washington norms that afford FBI directors ten-year terms to give the bureau independence from politics, the president unceremoniously fired Comey. He conveyed the news in a ters letter, hand-delivered to FBI headquarters by his former personal bodyguard.

(Of course, Bill Clinton fired William Sessions as FBI Director in 1993, just five and a half years into his ten year term.)

There are details left out of the “list of individuals” section. Andrew Weissmann is listed as one of Mueller’s “top deputies.” Not mentioned is the thousands of dollars he donated to Barack Obama and Hillary Clinton, as well as the fact that he attended Clinton’s 2016 “victory” party in New York.

Rather than conclude with the big story, that the Mueller report found no conspiracy with Russia and failed to charge on obstruction, Helderman and Zapotosky end the introduction by showcasing the Democratic efforts to find something in the report:

The release of Mueller’s report thrust the case into the political arena, arming Democratic lawmakers with an array of new information to support their attacks on Trump and open possible new areas of inquiry for their investigations.

The final line of the introduction is everything short of a “to be continued” message. The Post journalists heedfully declare, “Mueller’s investigation may have concluded, but Washington’s political wars were as hot as ever.”