Lefty HBO host John Oliver lashed out at Jay Leno on Sunday, trashing the former Tonight Show star after he called for more balance in political comedy. Instead of focusing on Leno’s call for more fairness, Oliver attacked the comedian as a hypocrite.

In a segment on public shaming and Bill Clinton’s affair with Monica Lewinsky, the Last Week Tonight host noted that some comics regret their ‘90s jokes about the White House intern: “Many comedians have since publicly expressed regret about things they've said, although one who hasn't, and who was among the most relentless, was Jay Leno.”

After playing a montage of cringe-inducing Leno jokes, Oliver mocked:

And if that's what he means by civility, may I offer my new book, "Oh, the places you can go fuck yourself, Jay Leno." Look how civil I'm being! Look how civil this is.

Now, Oliver correctly noted, “Those jokes have not dated well in any sense of the word.” But is the HBO host really angry about civility or the other part of Leno’s interview? Appearing on the Today show last week, he lamented, “I don’t miss [hosting]. You know, everything now is, if people don’t like your politics they – everyone has to know your politics.”

Leno said of his comedy: “I would get hate mail from both sides equally.” He contrasted to today: “But when people see you as one-sided, it just makes it tough.”

And that’s the problem with Oliver. He has lashed out at “evil,” “racist” political and religious conservatives, suggesting once he might shoot Tim Tebow. Oliver blamed the 2016 election on racism and said that American democracy is like a “four-year-old’s birthday party.” For a list of his worst comments, go here.

Later in the show, Oliver interviewed Lewinsky about the terrible treatment she endured back in the ‘90s. Yet, not one question had to deal with Bill Clinton’s culpability in all of this.

A partial transcript from Sunday’s show is below. Click “expand” to read more:

JOHN OLIVER: If you're hazy on the Monica Lewinsky story, at 22, she and president Clinton began a relationship that, very long story short, ended up with graphic details being made public through the report by independent counsel Kenneth Starr. And it is impossible to overstate just how globally famous Monica and private details of her life became. The media obsessed over every angle of her story, from tabloid stories like these to cartoons where microphones pointed at her face were replaced with penises to endless late-night comedy jokes. Look, my hands are not clean here either. I wasn't in the U.S. At the time, but ten years after the fact, I was in a "Daily Show" piece marking the anniversary of the scandal, above a graphic reading "Ten sucking years." Which is gross. It's gross. And many comedians have since publicly expressed regret about things they've said, although one who hasn't, and who was among the most relentless, was Jay Leno. 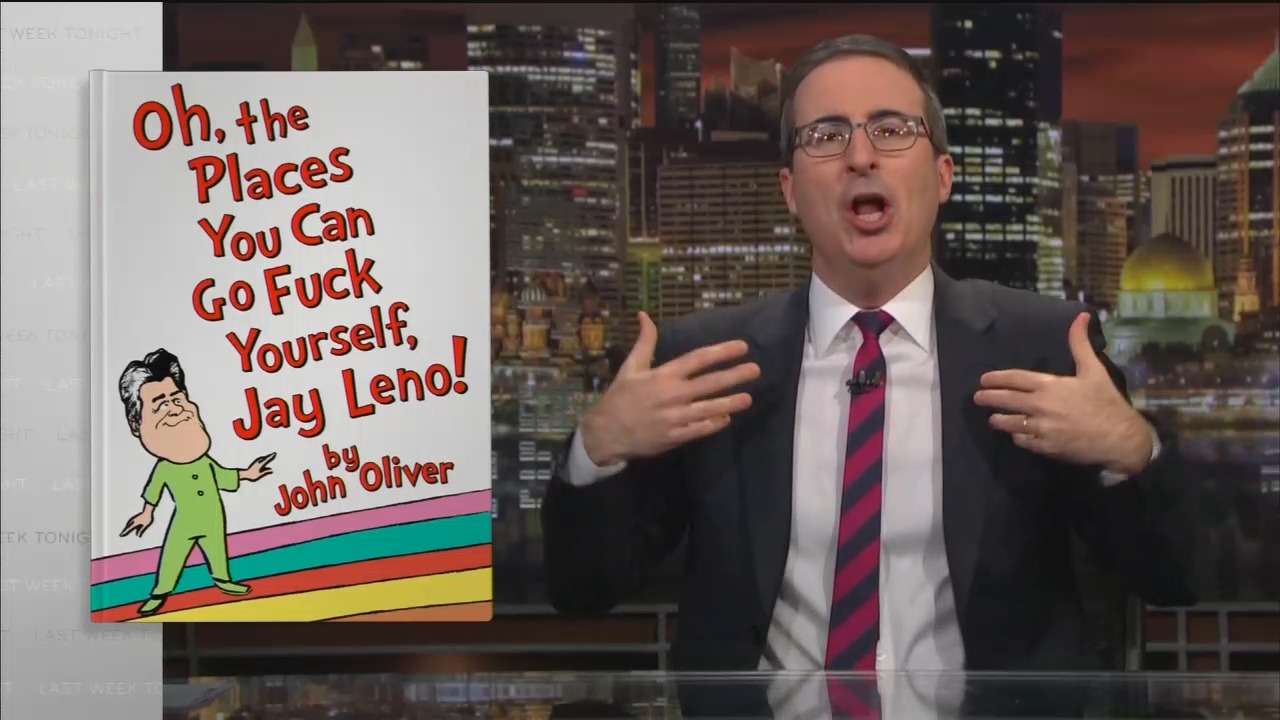 JAY LENO: Let's see what's going on with Monica, or as president Clinton calls her, "My little humidor." One million samples of DNA. They said it was the largest collection of DNA in the world, not counting Monica Lewinsky's closet. And the humidity, man, I'll tell you, people's clothes are stickier than Monica Lewinsky's. Man, it was just, oh. And you can't get away without at least one of these. Lewinsky, back on her feet. All right, ladies and gentlemen! And the grammy for best organ recital went to Monica Lewinsky, ladies and gentlemen.

OLIVER: Those jokes have not dated well in any sense of the word. And they're pretty rough, especially coming from a guy who, just this week, complained about late-night TV, saying he'd like to see a bit of civility come back. You know. Like that time he did a bit with a fake book about Lewinsky titled "The slut in the hat." And if that's what he means by civility, may I offer my new book, "Oh, the places you can go fuck yourself, Jay Leno." Look how civil I'm being! Look how civil this is.