This week, CBS This Morning has explored motherhood around the world, gushing about how other countries do things better than the United States. On Tuesday, the show touted all the free stuff Finland gives out, ignoring the country’s high taxes. On Thursday, the CBS journalists cheered China’s handling of raising children. At no time did reporter Ben Tracy mention the country’s authoritarian government or the millions of forced abortions as a result of its one child policy.

Regarding the intergenerational living that’s very popular in China, Tracy promoted, “Today, grandparents share almost half of childcare duties with mothers of two and three-year-olds. It's a big part of why China has one of the highest rates of women in the work force in the world.”

He contrasted, “In America, only about 14 percent of grandparents provide significant care to grand kids.”

Of course, it’s easier for grandparents to be involved in helping raise children when there is only one. NPR in 2016 explained the devistating consequences of China’s one child policy:

In the beginning when the policy came around in 1980, at that time they did not have scanning machines that could determine the gender of the fetus at an early stage, so people who delivered girls, for example, and wanted to keep their quota for that one boy — because if you used up your quota for a girl and then you gave birth to another girl and you would lose that — so people would either abandon their daughters or there would be infanticide, or they would give them away, which is part of the reason why we saw so many adoptions of Chinese babies, mostly girls, in the West.

But later in the 1990s, technology made it easier for people to do all these scans and companies like General Electric made these scanning machines that were portable and small enough that you could go from village to village and you could determine the sex of your fetus ... for as little as $10 or $20, so people would just have an abortion instead of carrying a child to full term. ... The Nobel economist Amartya Sen estimated there were about 100 million missing women, women that were never born or killed or aborted across Asia. 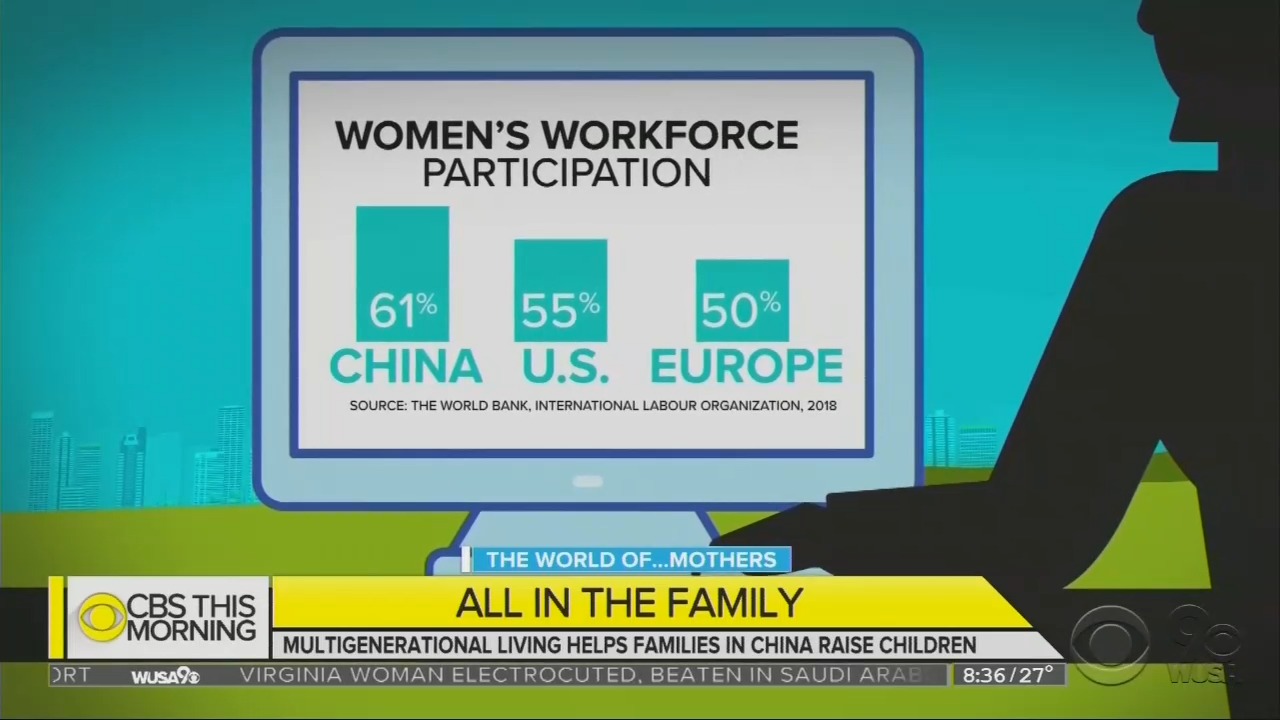 Tracy insisted, “Grandparents providing care for the grandchildren very much creates that opportunity for other members of the family, mostly the mothers, to engage in other opportunities.”

Actually, a generation of one child families and millions of abortion achieved this. Again, as NPR detailed:

Let's say you were born after 1980 in a big city, chances are you probably don't have a sibling. And if you're a girl and you don't have a sibling, you don't have to fight with your sibling for resources. So your parents will want to send you to college. They won't be debating a question of whether they should spend the money on your brother or yourself; it's all for you. So imagine this scenario replicated a million times over and the end result is urban women born after 1980 achieved way more than any other generation before them.

BIANNA GOLODRYGA: In our "World of Mothers" series we are exploring what motherhood means from North America to Europe, Africa, and now Asia. This morning, we're in China where childcare is a family affair. 2017 report found grandparents helped raise children during their pre-kindergarten years in more than three quarters of Chinese families. Ben Tracy spoke to a couple in Beijing, who after the birth of their son, added two more people to their households. 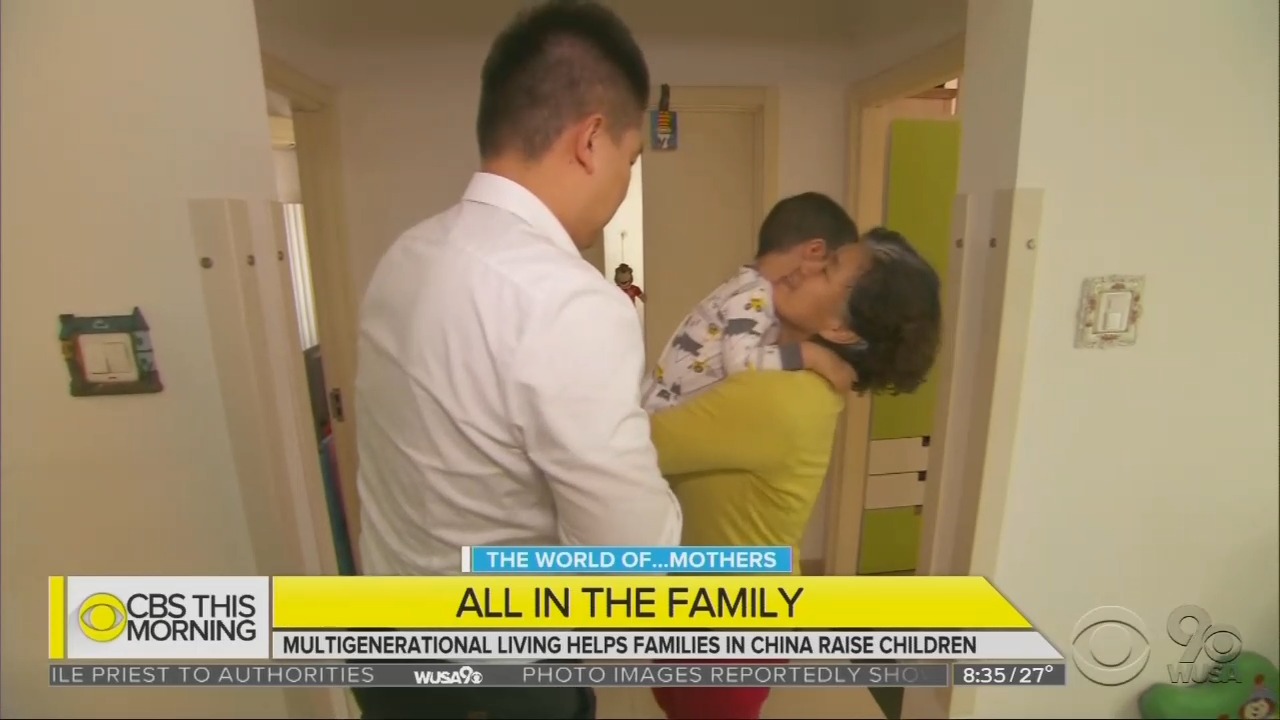 BEN TRACY: So, most Americans would probably dread the idea of living in a small, two-bedroom apartment with their in-laws, but here in China, it's not only common, it also seems to be something that both the grandparents and the parents seem to enjoy. It will be a few years before Colin Gu can drive a real car and get around Beijing on his own. So for now, the two-and-a half-year-old has his parents and grandparents to steer him in the right direction. Shortly after Colin was born, Li Ping and Gu Zhengzhao moved into their son and daughter-in-law's small two bedroom apartment to help raise their grandson.

ABIGAIL ZHANG: Ninety percent of the family have their parents and in-laws together with them.

TRACY: Abigail Zhang has long and unpredictable hours as an executive assistant at an automobile company. Her husband Gu Lin is an engineer. So, for most of the workweek, the grandparents are in charge. And cooking all the meals. Would you be able to have this kind of job if you didn't have this help from the grandparents?

ABIGAIL ZHANG: No way. I have to tell you no way. I had to keep my job because I can only trust them. I can only trust my parents or my husband's parents. They are the only person in the whole wild world that can love my son so much.

TRACY:  Why were you willing to move in and help so much? Li Ping says it's the Chinese tradition. “We are still quite healthy after retirement. Being around the kid every day brings us joy. We have nothing to complain about.” Historically, multi-generational living has been seen as the cultural ideal in China with several generations living under one roof. Today, grandparents share almost half of childcare duties with mothers of two and three-year-olds. It's a big part of why China has one of the highest rates of women in the work force in the world.

FEINIAN CHEN (University of Maryland sociology professor): It's not just about individual choices, but it's about what you do to maximize the well being of the whole family.

TRACY: University of Maryland sociology professor Feinian Chen said that in China parents often leave children behind with grandparents as they move from the countryside to the major cities in search of better paying jobs.

CHEN: Grandparents providing care for the grandchildren very much creates that opportunity for other members of the family, mostly the mothers, to engage in other opportunities.

TRACY: Chen was herself raised by grandparents in China and later in the United States benefitted from grandparents helping with her own kids.

CHEN: Without a doubt I would not have gotten tenure without the help from my parents and my parents in-law.

TRACY: In America, only about 14 percent of grandparents provide significant care to grand kids. Chen says it is more common among certain communities.

TRACY: Chang says that even though many expect grandparents to help out, she wanted to take a moment to let her mother-in-law knows how grateful she is. What did you say to her, and what did she say to you?

ZHANG: I say to her that I appreciate that they help a lot, and we always know that, as Chinese we don’t say it a lot. She said, “Yeah, I'm also a good daughter-in-law.” And yeah.

TRACY: You may be wondering if Abigail's parents also help out with their son. Well, they have their hands full. They're actually caring for their parents which would be Abigail's grandparents. So this inter-generational support network in China works both ways in families. Gayle?

GAYLE KING: We love that story, Ben Tracy. Thank you so much.