Be More Like Finland? According to CBS, U.S. Doesn't Measure Up in Giving Free Stuff

CBS This Morning journalists on Tuesday spent an entire segment hyping the glories of Finland and the country's free stuff, chiding the United States for falling behind. With very little discussion on the nation's high taxes, foreign correspondent Holly Williams and the show’s hosts praised the country’s paid maternity leave, hospital care and even supposedly free nannies.

Without offering much context, co-host Bianna Golodryga cheered the idea of dumping your kids in parks and handing them over to free nannies: “When I was there last summer, our tour guide told us women and families could just drop their kids off in the local park and they have paid nannies there where the kids go to work.”

Of course, liberal co-host Gayle King loved this: “I like how they are thinking In Finland.”

Finland has 5.5 million people. The United States has 325 million. No one seemed to think about the practicality of how transferring such massive entitlements to America would work. It wasn’t until the very end of the segment that co-host Bianna Golodryga noted that Finland is a “a much smaller country.”

The issue of taxes seemed of little concern to the CBS journalists. Finland’s personal income tax rate in Finland stands at 51.60 percent, according to Trading Economics. The sales tax is 24 percent. Talking to a Finnish doctor, Aydin Tekay, such concerns were dismissed as “politics”: 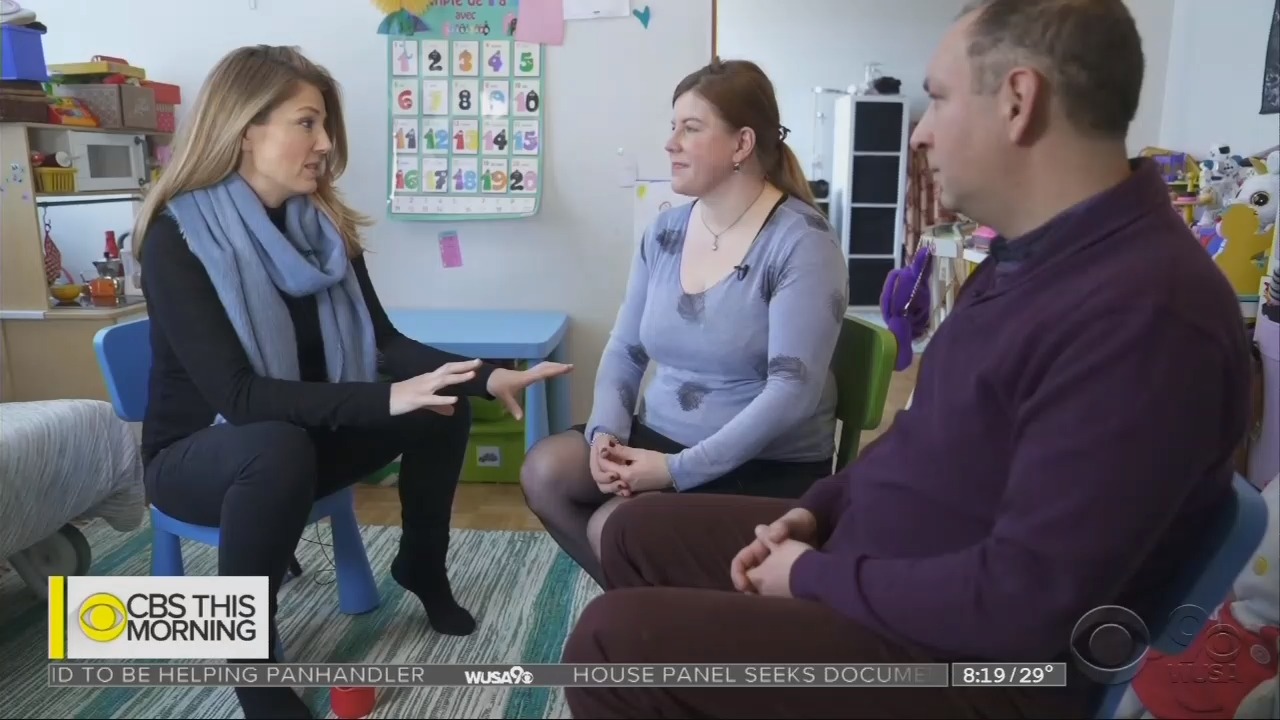 HOLLY WILLIAMS: Can what Finland is doing be replicated in a country like the U.S.?

WILLIAMS: You're saying there's no reason that the U.S. can't achieve this?

TEKAY: No, no reason, just politics, I think. Politics, yeah.

Co-host Norah O’Donnell snidely commented on how America doesn’t provide all these benefits: “And so if Americans decide they want to pay more and they trust their government, these are the outcomes that you can have. America has made a different choice.”

Co-host John Dickerson sneered of the United States: “And some would say that they have made the choice to have 50 million people be uninsured. And that they’ve decided that that’s okay.”

Journalists love to fawn over Finland. The Washington Post did it. In 1997, NBC’s Tom Brokaw enthused:

Today, 90 percent of Finnish women work. It's 74 percent in the U.S. And the gap between what women and men earn is smaller in Finland. By some measures, Finnish women are smarter than the men. They earn more than half the college degrees. It's all meant family-friendly government paid programs, like affordable day care...And parents can take three years off to care for a new-born without losing their jobs, thanks, they say, to mothers in government. Abortion is legal and free. Teen pregnancy rates are the lowest in the world. A law like America's failed Equal Rights Amendment passed long ago...

GAYLE KING: In our series "The world of mothers," we look at what motherhood means in different countries around the globe. This morning, we're going to Finland, which is consistently ranked one of the best places to be a mom. The country is praised for its low infant and mother low mortality rate, paid maternity leave and health care systems. And as Holly Williams found out, the government of Finland even gives new moms a big old gift. She joins us from Istanbul, Turkey, where she's based. Holly, good morning to you. 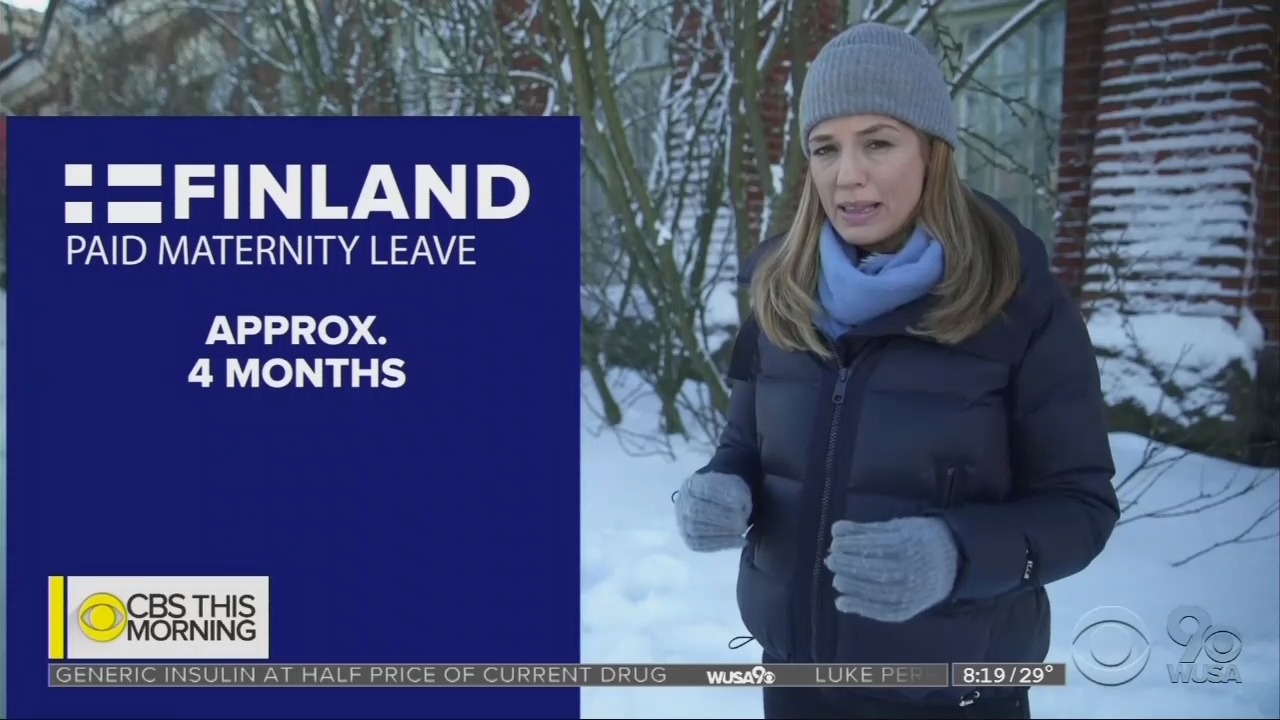 HOLLY WILLIAMS: Good morning, as can you probably see, I'm pregnant. My baby is due later on this month. So, I'm no longer doing any travel for work. But a few weeks ago, I went to Finland to see what exactly they're getting right when it comes to motherhood and how they're doing it. A woman in labor has gone into cardiac arrest. These medics need to save her life and her baby's. But this patient is just a mannequin. And here at Helsinki University Hospital, they hold emergency drills like this once a week. Finland's health care system has helped give it the lowest maternal death rate in the world. And it's available here to everyone for next to nothing. Doctor Aydin Tekay is the chief physician on the labor ward. Every mother here gets a private room and even the option of a water birth.

DOCTOR: ADYIN TEKAY: 100 Euros you will pay and of that you will 50 percent back as a reimbursement.

WILLIAMS: That's under $60 to have a baby. Compared with the U.S. Where the average natural birth costs over $12,000. And insurance doesn't cover all of it. Can what Finland is doing be replicated in a country like the U.S.?

WILLIAMS: You're saying there's no reason that the U.S. Can't achieve this?

TEKAY: No, no reason, just politics, I think. Politics, yeah.

WILLIAMS: The maternal death rate in the U.S. Has nearly doubled over the last three decades. In Finland, they've cut it in half. At a playground in Helsinki, we met Laura Smith from Detroit, who is living here with her Finish husband and their ten-month-old baby, Ella. Maternal death rates are even higher for African American women. One of the reasons Laura chose to have her in Finland instead of back home.

LAURA SMITH: My concerns mattered, my voice mattered. They saw me, they took care of me no matter what I look like and that's something I couldn't be certain about in the States.

WILLIAMS: Mother and baby are also entitled to free checkups. And when Ella goes to day care, that will cost less than $100 a week. It's all paid for with tax dollars. The wealthy hand over much more in Finland than the U.S.

ANNIKA SAARIKKO (Finland Family Affairs and Social Services Minister): We are collecting a lot of taxes. But if you go and asking from the Fins, are they okay with that, everybody's saying yes. We have good use with that system.

WILLIAMS: The system began in the 1930s, when Finland's started handing out free baby boxes to new families, filled with basic necessities.

WILLIAMS: They're still giving them out today. The box doubles as a makeshift cot. And the government also wants parents to spend time with their babies. In Finland, you're guaranteed around four months paid maternity leave by law. And parents can split another six months paid parental leave, though not at the same time. For Ella and Julianne, that's more time spent with their three daughters.

WILLIAMS: In some parts of the U.S., you get no paid maternal leave.

UNIDENTIFIED: Well, how do you do then?

WILLIAMS: The long, frozen winter in Finland is hard, but this is one country where they're trying to make parenthood easier. Nobody who we met in Finland bragged about their success. Rather, they're trying to figure out how to improve things even further. For instance, encouraging more fathers to take paternity leave. And that government minister who you just saw is trying to figure out how to encourage Fins to have more babies. Because despite all of those benefits, the birth rate in Finland is declining. Gayle.

ROBERTS: I like how they are thinking In Finland. Don’t you?

BIANNA GOLODRYGA: Yeah, when I was there last summer, our tour guide told us women and families could just drop their kids off in the local park and they have paid nannies there where the kids go to work.

NORAH O’DONNELL: Well, society needs to decide how they are going to pay for it. Twenty four percent sales tax.

O’DONNELL: Even though I’m just reading that the minimum tax rate, individual tax rate is about 25 percent. And so if Americans decide they want to pay more and they trust their government, these are the outcomes that you can have. America has made a different choice.

DICKERSON: And some would say that they have made the choice to have 50 million people be uninsured. And that they’ve decided that that’s okay.

GOLODRYGA: Also a much smaller country.

O’DONNELL: And that’s why we do these stories.